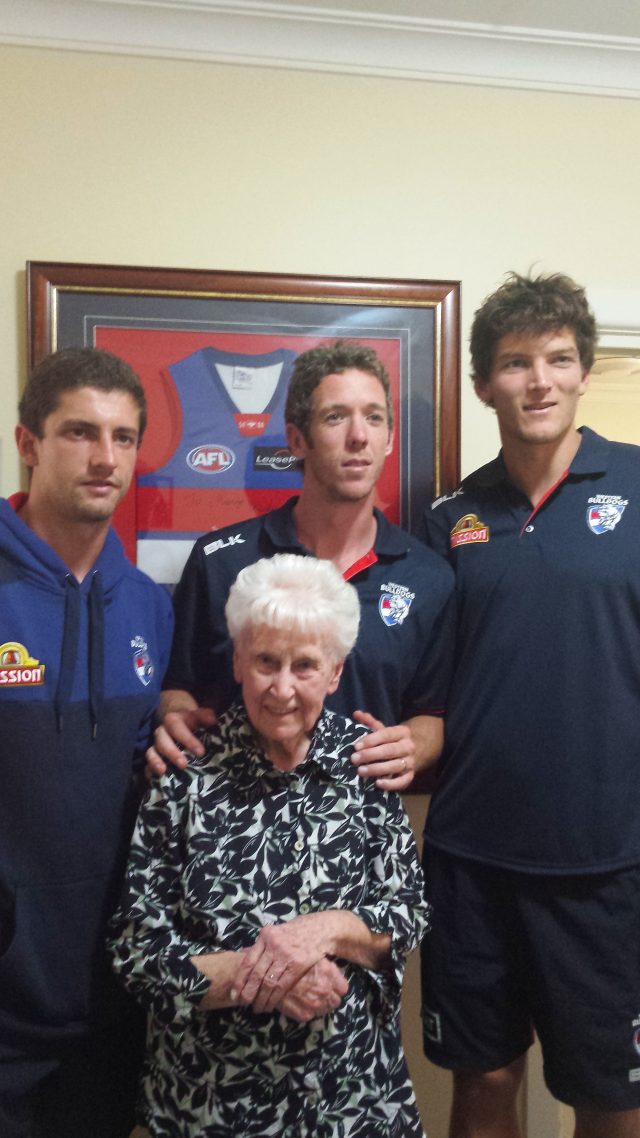 Mary Curry sits composed, nursing purple-coloured glasses in her lap. The armchair she’s perched on looks as if it’s hugging her. It’s hard to believe this is the same person who screams at the television during footy telecasts – “Ump. That’s a free kick.”

“Coaches and players come and go, but supporters are always there,” says Mary. One look around her Douta Galla Yarraville Village room and there’s no doubting the loyalty of this Bulldogs’ life member. A red, white and blue guernsey signed by players and framed in glass hangs on a wall. On the bottom is a brass plate engraved to mark Mary’s 80th birthday.

That was ten years ago. Mary recently celebrated her 90th birthday. On the window beside her, a host of cards from well-wishers hang on string. To mark the occasion, Mary was visited by Bulldogs’ royalty – captain Robert Murphy; ruckman, Will Minson; and one of the team’s best and brightest, Tom Liberatore.

“I nearly leapt up in the air,” Mary says, still relishing the thrill of meeting them. She points to the letter from Bulldogs’ chairman Peter Gordon that she received.

Mary has always lived in Yarraville where she raised four children. She remembers being 13 years-old, just before the Second World War, and trudging up Williamstown Road to the Bulldogs’ home ground, which in those days was called Western Oval. “It cost twelve and six to get in, and we stood and watched the game. Back then, at half-time, the Hyde Street Band walked around the boundary. Behind them were men were carrying a blanket to catch the coins.”

Mary has a remarkable football memory and freely shares her critique of players, past and present. Her all-time favourite is champion half-forward, Chris Grant. In a pocket-sized notebook, Mary has carefully recorded her Bulldogs’ memories in handwriting so neat it looks typed. She recalls a pre-game address by legendary Charlie Sutton, captain of the premiership team. “You just play and I’ll look after you.” Mary laughs out loud as she explains the stocky captain was ready to do the “rough stuff” to protect his team-mates.

In 1954, decked out in a club scarf wrapped under her chin, Mary watched the Doggies win their one and only grand final. “They were such a good team.” For younger, longsuffering Bulldogs’ fans, she has this prediction: “Won’t be this year.” But, Mary is confident sometime in the next five seasons, they’ll be premiers once again.