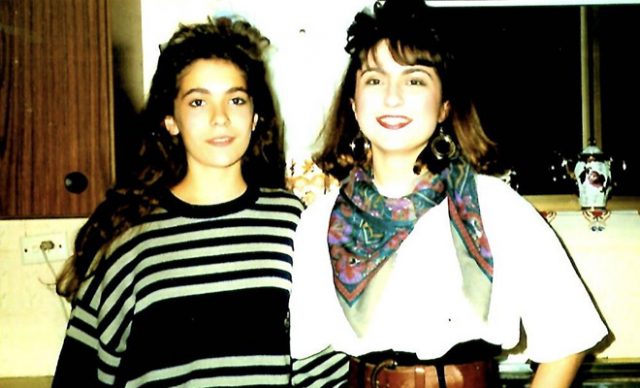 Due to an alignment of the stars and planets – or at the very least the sharing of a common goal to promote the people of the inner west and their pursuits – Humans of SKY is partnering with The Westsider to bring you more stories about…. you!

My parents arrived in Melbourne in 1967 from Greece – Dad came here for a holiday, and Mum flew in for a new beginning. Their first and only home is in Flemington. They had only known each other for three weeks when Mum received a telegram asking her to go home as her father had promised her hand in marriage to a local wealthy village boy. Dad was not having a bar of it so they got married in Melbourne instead.

I am the oldest of three sisters. I was born at the Queen Victoria Hospital in 1968 and grew up in Flemington. It was obvious as a baby that I had an eye turn, ‘crossed eyes’ or ‘lazy eye.’ I’ve had three squint surgeries, two before five and one at eight years old. I needed glasses as a toddler.

My dad was the sole breadwinner. He always gave his family everything they needed including the best eye doctor and surgeon. Practicality and affordability always won over fashion and eyeglasses choice so I was the kid in the class wearing the weird Dame Edna glasses.

I didn’t speak English, and Dad worked in a factory. Dad grew up in poverty and always said to me ‘You either work in a factory or study.’ I chose to study. I went to Flemington Primary and Mount Alexander College. Life was hard as an immigrant. I used to get picked on a lot. Names like ‘four eyes’ and ‘wog’ no longer pain me. Due to my eye problem, I wasn’t into sports and had poor hand-eye coordination. I was also a nerd (it’s cool, trendy and you’re considered smart if you’re a nerd now), and I am proud to say I haven’t changed.

When I was 16, Dad let me choose my next pair of glasses. They cost him about two week’s worth of wages back then. When I picked up the glasses, they were revolting. They were an ugly lilac colour with very thick lenses that attempted to change colour in the sun. Definitely not what an uncool, four-eyed immigrant teenager needed. I was disappointed that my optometrist had not guided me better. Both Dad and I were devastated. I promised then, that if I could become an optometrist, no one else would go through what I had experienced.

I did a Science degree at Melbourne University but realised quickly that’s not what I wanted to do. Experiments were not for me, so I continued on to Optometry. I graduated in 1991.

I found myself dealing with kids all the time. Optometrists would send kids my way. I didn’t know it then, but younger kids seem to be hard to test for many optometrists.

We offer something not many optometric places offer, a kids haven that cares for them in a safe, non-threatening and fun environment.

For the complete story and more Humans visit humansofsky.com.au or facebook.com/humansofsky

WHAT’S IN A NAME?