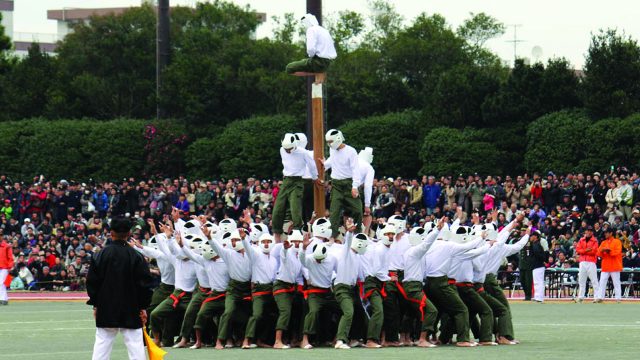 Looking for an odd sport to take up? Why not try a favourite sport in Japan called Bo-taoshi which translates as “bring pole down” as the name suggests its a sport of team pole toppling.

The founding of Bo-taoshi is unclear but it is thought the game orientated in the National Defence Academy of Japan as part of their military training for cadets in the 1940’s, and is still played in the Japanese military academy as part of their induction ceremony for new cadets.

In total there are 150 players consisting of two teams of 75 team members each. The offensive and defensive teams wear their designated team colours with no shoes as they are not permitted for fear of facial injuries and protective head gear is compulsory.

The object of the game is for both teams to keep their poles standing upright and to capture or take down their opponents pole. Both teams defend and attack at the same time so its a race to bring the other teams pole down before they bring down yours.

Rules of the game are that the defenders are limited to where they can stand however the attacking players can stand and walk anywhere on the rectangular field. The wooden pole which is normally 10-16 feet high must be touching the ground at all times. The first team to lower the opposition teams pole to an angle usually thirty degrees (relative to the ground) wins the game. Tactics allowed include gouging, punching and kicking and a typical game lasts less than 10 minutes.

The roles of the defensive team include the barriers whom form a human wall around the pole to hinder and barge opposition players either near or in the barrier wall. The ninja who is the last line of defence sits on top of the pole and kicks attacking players to keep pole vertical. The scrum disabler stops opposing team members from running on top of the pole to knock it down.

The roles of the offensive team include the scrum players who act as stepping stones by either laying down so team mates (pole attackers) can use their bodies as spring boards to try to run and spring off towards the opposing pole or allow team mates to climb over them. The pole attackers role is to bring the other teams pole down and take the ninja down. Support players help to create distractions and supplement attack.