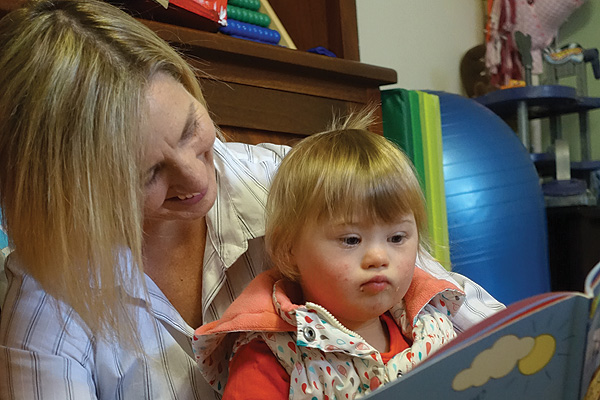 Bronwen Leary is a special kind of Mum. She is the parent who would rather be a stay-at-home mum than send her child to just any childcare centre. Lucky for first son, Ryan, she loved Altona North Children’s Centre, believing it far surpassed some of the other ten centres she visited. In fact, this centre has been a boon for her family, but since the management will soon be outsourced, she has begun to worry the quality of care for her children might be reduced.

When Bronwen was 13 weeks pregnant with her second child, Sarah, she was advised she fell into the high risk category of having a baby with Down Syndrome. The family decided to forego further tests knowing they would continue the pregnancy regardless. However, concerns began to emerge at the 20 weeks gestation ultrasound that the unborn baby could have a hole in its heart. The family were referred to a cardiologist and paediatrician for further investigation, but no obvious signs of Down Syndrome, or a hole, were confirmed. The family knew such advice held no guarantee, yet still were surprised to discover 6 weeks after Sarah’s birth she had a Complete Atrioventricular Septal Defect – a condition that requires surgical repair to the heart.

At this point, Bronwen’s relationship with the Altona North Children’s Centre began to deepen. She didn’t know when they’d be scheduled for Sarah’s heart repair, as this depended on the strength of the baby and the priority of emergencies at the Royal Children’s Hospital, but incredibly, her concerns were alleviated by the coordinator and her team. “They always found a place for Ryan,” she recalls, “to the point where the coordinator emailed parents to ask if they could notify her if their child was not attending that day.”

Bronwen’s decision to use this centre was initially based on several criteria, including her intuition. At the time she just felt it was one of the best centres in Hobsons Bay. She recalls staff went out of their way to consider her and her family and have continually been sensitive to their needs. They always asked about Sarah and made sure Ryan was adjusting well. The coordinator and her team became a rock for Bronwen throughout some tough days. “Having the emotional support from the staff was what got me through that time because it was very hard,” she says. But when it was time for Sarah to go to day-care, the decision was easy. Bronwen absolutely knew her daughter would be in safe hands at the children’s centre, and again; she was right.

The centre was council managed and facilities like these are often service leaders in the childcare industry. They hire mature and more experienced staff under fairer pay conditions, thus creating continuity of employment within workers confident in their roles. Always, staff showed innovation and were hands on ready to assist Sarah. When Sarah learnt to crawl, staff made sure there were wedge or step mats available for her to exercise her gross motor skills. When she used a walker, staff included the other children and created a valuable learning experience for everyone. When Sarah looked in the mirror, staff capitalised on this developmental stage by placing pictures of facial expressions on the mirror, so that when Sarah made those faces she would understand that feeling. 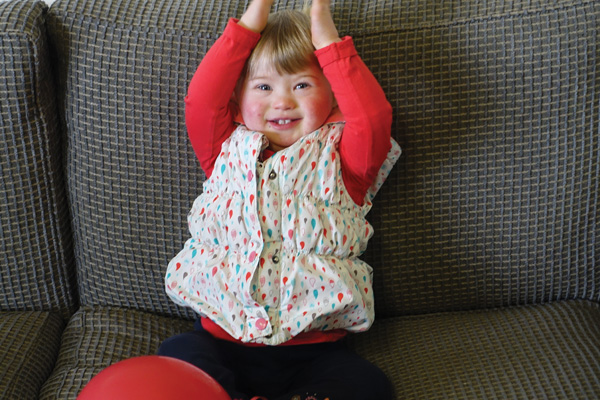 Bronwen knows that time put into Sarah now means her child will be better at managing her independence in the future and less reliant on the resources of local government and the community. Already, within the last year, the standard of care offered by the children’s centre has made an immeasurable difference to their lives and she finds it difficult to comprehend why council would not want to remain at the forefront of childcare within their locality.

“Children with special needs require more help through life and that generally falls on the parents and the community. So what we put in now is crucial for a child’s future independence,” Bronwen says. Her fear is that once the service is outsourced and new management take over there will no longer be room for the staff who work with Sarah, who know her history, her quirks, her needs, and her innate ability to light up a room like a spark. In conjunction with the coordinator, Bronwen organised, on two occasions, for staff to receive training from Down Syndrome Victoria. Both times staff from the baby’s room and then the toddler’s room went beyond the call of duty to be available to attend the courses. This shows the commitment staff have to upskilling, and also positions the centre as able to provide a broad range of care for children of all abilities.

Today, Sarah is just over 2 years old. Bronwen says, “She’s a very outgoing personality, my social little butterfly. She’s amazing – I’m in awe of her.” Exuberant with confidence, she’s a girl capable of partly dressing herself, running, talking, brushing her teeth, feeding herself independently; she loves books and being read to, and she acts a lot like a typical toddler with a similar level of capability. In part, Bronwen believes this is due to the effort taken by staff at the centre to make sure Sarah’s developmental requirements were always well catered for, as well as her every day needs lovingly attended too.

It is the dream of probably every parent whose children attend day-care that each child be treated as if he or she were the carer’s very own. And this happens within government funded and managed facilities because not only are the accountabilities and consequences greater, but the visions are a wider net spread to meet the needs of all beings in the community – their humanitarian approach is more central to their outcomes. Bronwen believes that Altona North Children’s Centre could be used as a prototype on which to model more children’s centres within the region. “With the amount of people on the waitlist for this centre alone, Hobsons Bay Council could open another and it would support the community more,” she says.

But, is it too late? Invitations for tender have already gone out and the new management are heralded to take over by January next year. Although, there is one light standing out amongst the anxiety – A group of proactive parents who tirelessly fought alongside the Australian Services Union to retain both of the children’s centres in-house. They have successfully created a cooperative and by invitation will put forward a tender for the management of the service.

Like Bronwen, these parents are especially committed to retaining the level and standards of service that have been available for many years. They are a distinct group who believe the excellence at these centres exceeds any in comparison, and they’re not willing to easily relinquish this treasure. “It’s not just a normal childcare centre,” Bronwen says, “These educators are passionate about the well-being of children and their families and sincerely care about people; they all seem to have this kind of quality, which puts the centre above any other. I feel like we are family – it is part of my life.”

Kyla-Jayne Rajah is a freelance writer who is deeply grateful for the caring nature of staff working at the Hobsons Bay’s children’s centres.