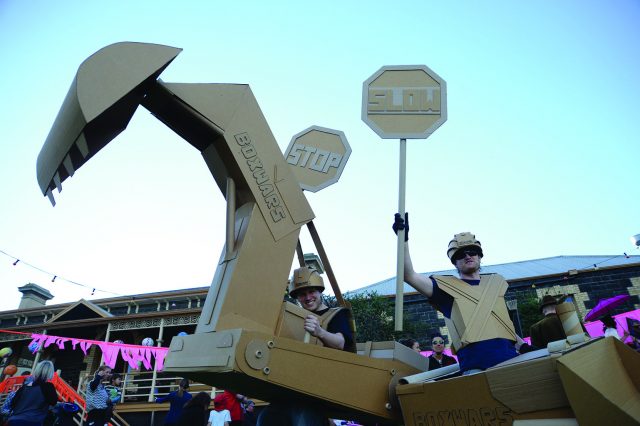 In the wake of the recent controversial Federal budget announcements, western suburbs arts alliance Arts West believes up to 4,500 arts activities across Australia are now in jeopardy. Are we entering an era of cultural censorship?

When you think of art in the western suburbs, are oil paintings, marble sculptures or opera the first things that come to mind? Or do you think of street art, the Snuff Puppets, and the Footscray Community Arts Centre?

In these troubled times, Arts West aim to provide a clear voice for the community and artists. Speaking on behalf of the Arts West executive, Devon Taylor believes it will take some time, but we will see a ripple effect in our community, as funding cuts limit small and medium arts initiatives and emerging artists are muted; “There will be various impacts, they will be different for each organisation, but gradually we will see proposals suspended – the June round project funding has already been cancelled – and other projects are uncertain going forward.”

When you consider the diversity and projected growth of this region, arts funding is an important seed for activities in the communities of the west. Art is a language that helps with communication, a different way of expression that brings people from varied backgrounds together.

Arts West directly represents eight organisations, reaching over 200,000 people per year, organisations who are continuously engaged with the community. They don’t just perform for the public, they interact with other sectors, and find themselves working with refugees, in prisons, schools, through council, at festivals, family activities – they even get behind community movements and appear at public rallies. Its a long process to become part of the community and the effects may not be noticed immediately but they will flow through.

“Some organisations are embedded in the community, look at FCAC, its more than 40 years old and its programs may be compromised – and it’s not just the organisations, it flows down to the people, the independent artists” said Devon.

So what happens next? Devon is being cautious; “We will have to wait until September now, though we aren’t sure if those rounds will happen – if they do, competition will be twice as much (for the funds).”

Independent media has voiced a lack of trust in the motives of the new National Programme for Excellence in the Arts and their ability to distribute funds equally across various art mediums. At this stage, the (vague) indicators suggest the majority of backing will for major events held by conventional, institutionalised organisations. In other words, traditional art outlets look to have been protected.

George Brandis is leading the internet censorship charge, so it has been suggested that these cuts are just another form of censorship. Devon has an interesting take on this theory; “A good analogy is sports. Does the Minister of Sport tell you who can play for your team? The ideology is wrong. The way it works now, you don’t have to seek approval for what gets funded, that’s why we are advocating things should stay the same.”

On the flip side, there are still people who agree with arts cuts and think the money could be used on critical services like health and education. Devon’s view on this thought process are clear; “We’re part of the health and well-being of people! Does it fit in the system? It creates a better worker, more motivated people, we sometimes work with people who can’t see past the next day. We seek to be further integrated into those areas, the government sees economies, but this all affects that. Our industry turns $1 into $8 where funding is secured for 3 years or more, so talking about this as a handout or subsidy, there’s your economy!”