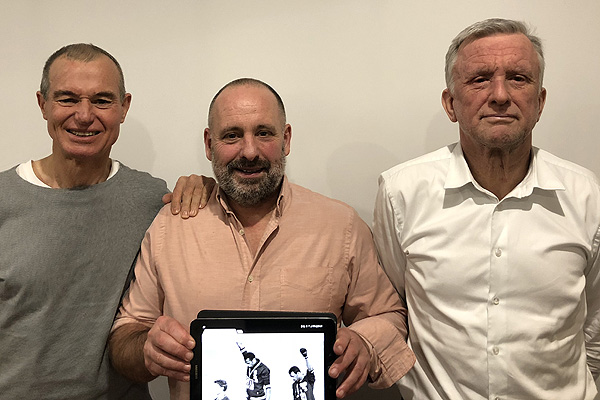 Peter Norman could run. Wiry, slight by today’s standards, he launched from the blocks during the 1968 México Olympic Games, powering to the finish line, coming second in the 200 metre sprint. Time: 20.06 seconds. Indelible stat.

Little else seems remarkable about the twenty-five year-old Aussie sprinter — in many ways, a typical young bloke of his day. Until Peter faced a defining question: stand against injustice or turn away? Remember that photo … ‘white guy in the picture’?

Just one other thing: Peter Norman lived and worked in Williamstown.

Peter’s answer to the ‘moment of truth’ was simple: Count me in. At the ‘68 medal ceremony, he wears an Olympic Human Rights Project (OHRP) badge.

After his fellow African-American medallists raised blackgloved fists above their heads in a ‘human rights salute’, they’d forevermore be ‘brothers’.

Five decades have passed. Three Williamstown locals, easygoing sort of blokes themselves, think it’s time for Peter’s neighbourhood to pay tribute to his inspirational, at times unsung, stand. The trio propose renaming the local athletics facility and painting a mural that will be seen from the main thoroughfare: measured tilt to that iconic moment and Peter Norman’s courageous story.

It really begins a world away from bayside Williamstown in a tumultuous 60’s USA. The African American Civil Rights Movement had been in full swing for a decade. Martin Luther King Jnr was assassinated six months earlier. The ‘68 Olympics loomed as the perfect platform for shining a light on discrimination.

Bronze medallist John Carlos has talked about the conversation that took place after the race as the African- Americans told Peter of their intentions.

Peter was to wear a large white badge decorated with the green Olympic wreath and black lettering: Olympic Human Rights Project. But the African-American runners weren’t prepared to give up theirs. Another athlete had one. ‘Hey mate, you got another one of those?’ USA rower Paul Hoffman recalls being asked. His badge was pinned to Peter’s green and gold tracksuit. Peter even came up with the idea the two Americans share a solitary pair of black gloves. 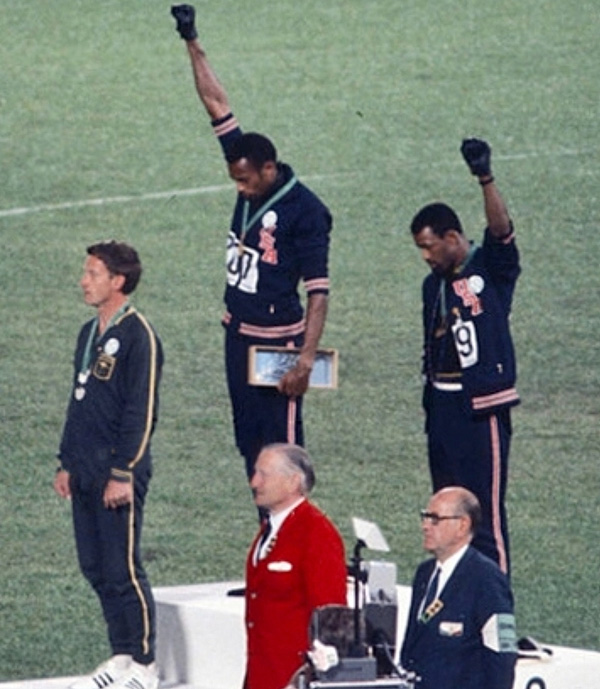 John Carlos expected to see fear in the Aussie’s eyes. Instead: ‘I saw love …,’ the lanky American said later, struck Peter never flinched on the dais. And like it or not, the gifted runner who called Willi home, took a place in the annals of both Olympic and civil rights history.

The two African-American athletes were immediately sent home and stripped of their medals. Peter stayed on but was cautioned. He returned to a country that had only recently secured the right for Indigenous Australians to vote and be counted in the national census. Three years would pass until an Indigenous Australian was voted into Federal Parliament. Mabo decision and apology to
the Stolen Generation were decades away.

Chilly Tuesday night, downtown Williamstown. Free wheeling conversation ‘round a table between a handful of guys wrestling with history and meaning. Red wine. The sort of setting I’d imagine a middle-aged Peter Norman would’ve been right at home at.

Michael Faltermaier, Rod Walker, Michael Boquest — lawyer, accountant, anaesthetist — met, somewhat accidentally around a similar idea: it’s been fifty years since Peter Norman took a stand after setting an Australian athletic record. Sure, he grew up in Coburg, but Peter lived and worked in town. He had a part to play in the course of history. Let’s do something.

Rod was in year seven at Willi Tech when Peter returned from Mexico to the classroom. ‘We liked to wind him up,’ says Rod of his footy-loving phys-ed teacher, ‘who, to be honest, could be a bit of a smart-arse.’

Teacher versus students pitted in a race to the boundary. Peter granted the teenage boys a head start. As they walked across the grass, Rod remembers thinking at the time: ‘When is he going to tell us to stop?’ Next thing he sees Peter Norman flying past his charges in five strides. ‘Geez, he could run,’ says Rod. Rod was too young to understand the chill his teacher faced outside school. Peter was hard at work on the track preparing for the ‘72 Olympics. Records show he qualified 13 times. Yet, no sprint team was sent to Munich. Hmm.

20.06 stills stands as an Australian record. After Mexico, Peter never ran for his country in the Olympics again. In 1999, Peter was inducted into the Sport Australia Hall of Fame, and in 2000, awarded The Australian Sports Medal. Induction into Australian Athletes Hall of Fame came later in 2010.

Overseas, he was a hero. John Carlos and Tommie Smith’s contribution to a fairer America was finally acknowledged. Peter’s role was coming to light. 2005 footage of Peter speaking in the US reveals a self-assured man of wit, a natural public speaker. The occasion is a commemoration ceremony at San Jose State University for a sculpture celebrating the ‘68 moment. Carlos and Smith are immortalised standing on blocks — but no Peter. He didn’t want a statue. Leave the podium empty for anybody wanting to take a stand.

In the lead up to the 2000 Olympics, Peter participated in Melbourne events. But no fanfare for his athletic achievement or historic stand was arranged during the Sydney Games. He made it along all the same. Team USA invited him. There were personal battles to confront. After a painful tendon injury, gangrene almost set in, which may have cost Peter his leg. He died of a heart attack aged 64 in 2006, nearly forty years after that eventful day in Mexico. Williamstown Town Hall was packed with mourners at the funeral. Two stood out. John Carlos and Tommie Smith were pallbearers and carried a wooden coffin holding the body of the ‘soldier’ who once stood with them. The US Track and Field Federation proclaimed the date of his funeral, October 9, Peter Norman Day.

Six years later in 2012, Peter’s mother, Thelma, was among family who made their way to Canberra to hear the Federal Parliament issue an apology to Peter Norman. In a television interview, Thelma said Sydney was her son’s ‘greatest disappointment’. Yet, the Australian Olympics Committee (AOC) baulked … no apology was necessary – there were reasons. Finally, in 2018, the AOC posthumously awarded Peter Norman an Order of Merit for his contribution to Australian sport. Australian filmmaker and Peter’s nephew, Matt Norman, made a documentary, Salute, about his uncle, which was released ten years ago. But memorials for Peter are powerful in their absence: mural in Sydney and Richmond; there’s a painting in Parliament. It doesn’t take much to uncover a Peter Norman yarn in Willi though. Now, three locals have a plan.

What an opportunity to stand for a man of courage who could run at lightning speed.

Anyone wanting to help or show support for the proposed mural and renaming of the Newport Park Athletics Facility can contact — Rod Walker (rodwalker@gmail.com), Michael Faltermaier (michael@mflawyers.com.au), Michael Boquest(mboquest@gmail.com).