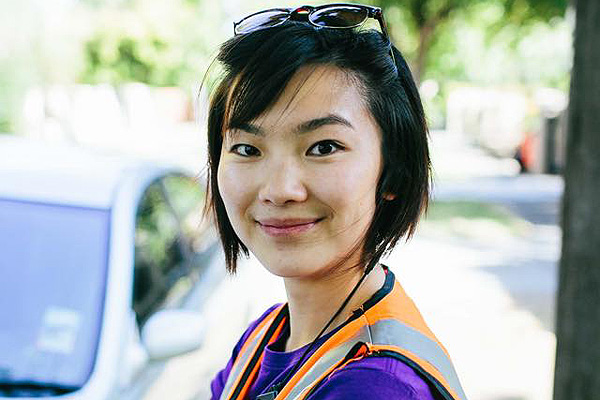 Nikki Tran is a writer and filmmaker drawn to projects that combine genre with underrepresented voices in Australian storytelling. Her latest project is FRESH! A 6 x 5 minute online web series available on YouTube. The series is a “dramedy” set in a fresh food market where the staff struggle to stay professional in a world where businesses are still family-run, bargains are bellowed in several languages and no one gets served without first winning an elbow fight. Scenes were filmed in Footscray Market, Preston Market and Dandenong Market.

Nikki has lived in the west all of her life. Her family has moved around the same two blocks in the Footscray/Maribyrnong area about four times. Many of her friends also live in the west.

So why this concept?

“I created the series to touch on some of the stories, experiences and cultures in my community that are under-represented on Australian television and film. Growing up in Footscray, I often accompanied my grandma and mum when they did their grocery shopping at Footscray Market and Little Saigon Market, it played a significant role in how my family connected to the wider community. The stalls are mostly run by migrant families that have moved into the area over the years, and it’s a microcosm that reflects the make-up of the community as a whole.”

“There are more people from culturally diverse backgrounds living in the area, the business and local events are also reflecting the change. With a push from local council and younger demographic of people moving into the area, I think there is also more of an emphasis in arts and culture in the community as well. The area is gentrifying rapidly though, and that comes with changes both good and bad.”

Even though we’re in the middle of winter, one of Nikki’s great joys right now is a great cup of tea. Even better when she is given a ratio of milk to tea just perfectly right!

So what are Nikki’s favourite hangouts?

“Nothing beats Pho Hung Vuong and the banh mi at Nhu Lan Bakery, I’m also a member of Footscray Community Arts Centre’s West Writers Group, so after each fortnightly workshop session, we like to go grab pizza and a drink at Back Alley Sally’s.”

You can find the episodes online @ youtube.com/watch?v=Bv_hel9Caio&index=2&list=PL0_SCFDYWrJSoYIHDUQHMbv-n2_-KdBvB
Or follow FRESH! on social media via: facebook.com/freshwebseries
www.instagram.com/freshwebseries