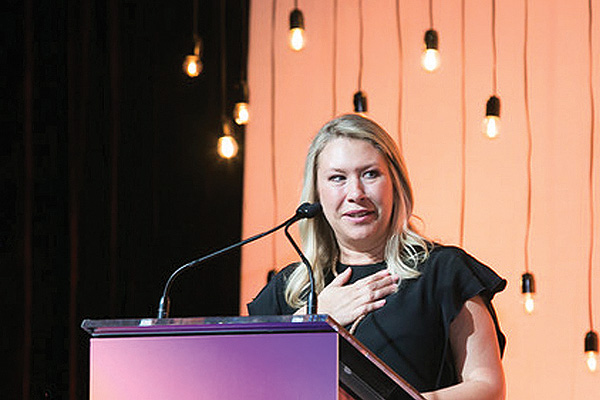 Having been a successful bar owner, CEO and Founder/Director, Katy Barfield is now heading up surplus food marketplace Yume, and saving food tonne by tonne.

Your first business in Melbourne was a bar, how did that come about?

“I look at a complex problem and find a simple solution that can gather momentum and people can easily get behind.

Twenty years ago, I bought a dingy bar with my partner Russell in the CBD. It was selling soggy chips and warm beer and there was nothing else around for the workers that was good quality food at an affordable price. We did it up, bought in a chef and played great jazz. It became quite popular because it wasn’t high end and it wasn’t fast food.

This is where I got my first insights into food waste. Working with our own chef, I saw the food going into the bin – not just food scraps but food straight from the fridge because people just didn’t order the salmon or the chicken that week. It blew my mind when I thought about our little 60 seater bar and how much food waste we had, then thought of all the other bars and restaurants in the city with the same problem and I wanted to do something.”

How did SecondBite come about?

“We ended up selling the bar at a small profit, which is hard to do in hospitality, but we had created something people valued. I wasn’t sure what to do after that, so I started volunteering. That’s when I met Ian and Simone Carson (founders of SecondBite) who were picking up spare food from the Prahran markets at the end of trading and dropping it to Sacred Heart Mission.

I fell into SecondBite by luck rather than design. It was a perfect fit and I was smitten and dedicated everything I had to the cause. I thought I’d be there for about six months but 7 years later by the time I transitioned from CEO to Non-Executive Director of SecondBite, we were rescuing millions of tonnes of food each year nationwide and redistributing it to families living in disadvantaged circumstances, we had grown to a team of 25 with 650 volunteers and I had found my passion.”

A big part of your job is public speaking and you are a social entrepreneur, what’s an average day look like?

“My education and training was in acting, majoring in literature. I was one of “those” kids who loved reading Shakespeare! It did help me though, because despite doing TED talks and other big talks, I still get nervous and my training helped me think about the message I wanted to convey and how to get that across to people.

In my life there is no such thing as a standard day. I have a to-do list which I try to work through, but then something will come at you from left of centre that must be dealt with then and there. I love the fast growth start-up phase, I came up with the idea of Spade and Barrow in my shed, thinking we should be buying direct from farmers so they don’t have to throw fresh produce away.”

What is the biggest difference in moving from a non-profit model to a social enterprise?

“Yume is by far the most challenging thing I have ever done. It makes SecondBite look like I had training wheels on. I got some criticism for moving out of the non-profit space into that for-purpose space, social enterprise model. We make no apologies for giving returns back to Australian farmers or Australian manufacturers, for product that is perfectly good to sell. We must find a scalable model to address this enormous problem facing us. The harsh reality is, important as food rescue is SecondBite, Foodbank, OzHarvest and Fare Share, they are only rescuing 2% of commercial food waste and it’s a resource intensive model buying vans and providing warehouse space. I started Yume because I wanted to work out how to save the other ninety-eight percent.

The non-profit space is tough. Seventy percent of my time as CEO was looking for where the next dollars are coming from rather than looking for long-term solutions to fix the underlying issues. With Yume, I get to spend my time solving the problem of food waste instead, by developing a model that created its own funding stream.”

Why do companies throw away perfectly good food and how do you get access to it?

“Brand recognition and consumer trust is the most important currency for large companies, so they would rather perform a ‘deep burial’ and get rid of product that may present a brand risk such as perfectly good product which is safe to consume in slightly damaged packaging. Much of the food we see is fresher than anything we used to get at SecondBite, it might just have a packaging misprint. This is where the relationships come into it. Everything is about relationships, it does not matter what technology we have, at the end of the day, it’s two people sitting down talking and relating to each other. We have big industrial companies like Sodexo Australia who use us now because they understand that we have quality product and the trust has been built.”

So really this food could not go to charities either?

“Many of the products we move are not suitable for charities like twenty-three tonnes of cream cheese or three tonnes of cocoa butter or 3 tonnes of milk powder. What we do sounds easy, but it’s really challenging as often we have a small window of opportunity to find a solution.”

Has much changed in the food industry since you started out?

“Not much has changed in terms of food waste in the sixteen years since I started working in food rescue, which is a real problem, particularly in the meat industry when farmers try to meet demand and then the market is flooded with cheap imports. Last year we had suckling pigs on the platform because the farmer could not afford to feed them which is just heart-breaking. I have had plant managers on the phone to me distraught because they have 40 tonnes of food they have to throw away.”

“Nature is what keeps me going, it’s the biggest inspiration in my life. When I am stressed or anxious, I head to the water. I was in Spain recently and just horrified at the amount of rubbish lying around the empty bins. It drives me mad but it drives me forward to help change people’s behaviour. That’s what Craig is doing in ABC’s War on Waste, he is waking people up and creating awareness.

My children also inspire me of course, they are at that age when they have not been affected yet by what society says they should be like.”

Are you a good cook?

“To relax, I love cooking, it’s so meditative. I grew up in the countryside and had total freedom. One of my favourite memories is of mum cooking a Sunday roast. I do that for my kids now, with a glass of wine and some jazz playing!”

What does a perfect day look like in the inner west?

“I love the inner west and can’t imagine being anywhere else,

it has such a community feel. We have been in Yarraville for nine years, we know most of our neighbours and many of us have keys to each other’s houses. If I had to plan a perfect day in my neighbourhood with no cost restrictions, it would be breakfast at Advieh or the Cornershop, a movie at the Sun Theatre, a degustation at the Copper Pot and walking the dog in Cruikshank park. But I also love YimYam and Seddon Wine Store for a cheeky glass of wine and antipasto platter.“

Food Facts:
Each year, 3.9 million tonnes of quality food is discarded by the Australian commercial food sector, and it’s estimated that between 400,000 and 600,000 tonnes of quality, edible food could be rescued. To date, Yume has returned over 1.5 million back to Australian farmers and businesses. That’s over 300,000kg of quality surplus food.