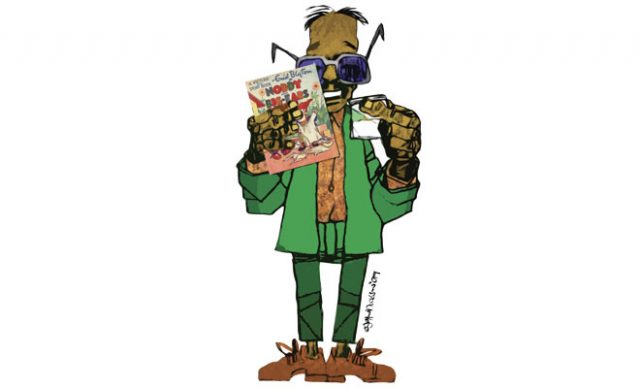 What is going on?!?! Chaos everywhere! Need a broom. The wily Rosa Flow has been swept to the side, cooling her heels in the drunk tank while the febrile plod go about sorting out just exactly who she is and what is she up to? Back at the Church of the Mighty [War Against Satan HQ!! ], Roger Alan McKeever still lies still before bewildered stunt-double preacher Pria Kristen, his hi-vis orange cone hat spilled to one side keeping the baying crowd at bay. The congregation remains convinced that McKeever’s rising up from his [stolen] wheelchair to seek the forgiveness of The Lord is a bon fide miracle and deserves to be celebrated. Bro Jimmy Masters, also out cold, is propped against a wall in the airlock between the concrete-lined bunker hiding his purloined fortune and the ‘real’ world of the Church of the Mighty [War Against Satan HQ!! ]. Meanwhile Irish-Tongan, Fatso, scootches about, slavering over the piles of folding he has discovered in deep-black-black lockers barely visible in the fortified coffer that separates the airlock from Masters’ retreat.

[Somewhere in the future, the mind belonging to a psychologically suspect Detective Sergeant Bryan Paterson is beginning to disintegrate. Tasked with solving the mystery of the Great Easter Heist of the Church of the Mighty [War Against Satan HQ!! ], this hapless flatfoot has found himself deep inside an unrequited bromance with McKeever. He achieved this alarming state after watching playback of CCTV footage from The Day in Question in which McKeever, in deep communion with pinch-hitter preacher Pria Kristen’s invisible friend, abandoned consciousness when his absurd, insubordinate body decided to land on its head, a few feet short of Kristen’s pulpit. Paterson is doubly troubled as the go-to felon he had stitched up for this caper, Rosa Flow, appears to be innocent.]

Pria Kristen stared at the prostrate form at his feet. It was times like this that lit the yearn for the hot, wet lands of his birth. He missed the stench of rot, the fecund earth, the weight of the sodden air. This dry place was like its people: flinty, hard-surfaced, alien, distant, empty.

Pria’s Indonesian life had been a privileged one. If nothing else, this period of exile in Oz had taught him that. To his father, Pria had managed his banishment with grace, demonstrating a willingness to roll up his sleeves, accept a modest job and continue to practice the religion his family had covertly followed for generations. It was not easy being a Christian in the largest Muslim community on the planet and it was this subterfuge that taught his family the value of secrets in pursuing a life above the stink of the street.

This singular skill had allowed his father to parlay a lowly bureaucratic position in a distant province into a cabinet post in the national government through accumulation of indebtedness. Daddy had discovered early that removing obstacles from the path of the seriously wealthy allowed the now Minister for the Interior to mine a rich vein of intelligence essential to the dark arts of obligation which in turn fed his rapid rise.

However, along the way, he had also collected some rather unsavoury predilections. His need for ‘the comfort’ of periodic visits to carefully selected inmates of Java’s Sukmiskin prison was disingenuously portrayed as another intelligence-gathering exercise. It was anything but. While daddy had underestimated the security of his antics, Fatso had not.

And here, dear reader, is where our stories intersect. For it was a coked-up Pria brat that surrendered the structural integrity of his arm to McKeever’s careless strength on believing that the blathering of this ‘entry co-ordination agent’ on the door of Jakarta’s Best Boogey Baby Boom Room nightclub did not apply to him. And it was Fatso’s infatuation with McKeever that allowed Pria’s daddy to quickly learn that there were others that knew of his taste for the dark side. Immediately understanding which side his roti was oiled on, the Minister for the Interior invited McKeever to return to his home country, sans the assault charge that had found him weeping in one of the less sanitary cells of Sukmiskin prison.

A furious parent then turned on his unruly son, banishing him to the gulag of Melbourne to ‘have a cold hard look at himself’ admonishing him to return to the bosom of the home only when he clearly understood how the family business worked – a farrago of obfuscation, invention, structural mystery and flat out bullshit wrapped in a fog of entitlement, empty authority and a knack for keeping one’s dynastic activities well below the battlements.

Once he dried out, secured possession of an anonymous town house in Caroline Springs, and squirrelled away his considerable Enid Blyton collection, Pria ostentatiously joined the Church of the Mighty [War Against Satan HQ!!] to assuage his father’s demand that he keep his faith alive. He even found succour in delivering the odd sermon and harassed Masters into allowing it to continue to distract the preacher from looking too closely at some other activities undertaken by the church’s youth. For Pria had stumbled across this busy group of enterprising young people who, adhering to the prosperity theology of their church, presided over a considerable and highly profitable drug distribution network. Pria invested in a taxi business and was welcomed into the fold as logistics manager. That he periodically was obliged to transport humans was a source of irritation to him, but the profits realised from his extra-curricular activities mollified this blister.

Now looking at McKeever stretched out before him, Pria was reminded of one of the seminal works of his idol, Enid Blyton. At his feet lay Big Ears. Although his ears were relatively modest, McKeever’s preposterous hands satisfied the out-sized appendage requirement, but it was the cone-shaped hat that completed the comparison. There was something else out there on the edge of memory about this lump of a human. Suddenly, Pria’s arm began to ache.

Rosa Flow was not cooperating with the constabulary. With every question asked of her she delivered a broadside of such purulence that Constables Might and Mayne were silenced with admiration. When Might offered to ‘slip out for some burgers’, Mayne was left to fend for himself with this foul-mouthed whirlwind.

Banged up in a holding cell alone, Rosa began to sob. Loud catarrhal gasps echoed around the station until Mayne came to see what had sparked this sudden collapse of defences. Mistake. As he entered the cell, Rosa demonstrated the Costa Rican Ankle Tap – a manoeuvre taught her by an ex-lover, an Israeli ‘soldier of fortune’, that guaranteed its recipient instant paralysis. As Mayne measured his length on the cell floor, Rosa pounced. With her knee in his sacrum, she insisted he put his arms behind his back where she secured his thumbs together with a cable tie she had found in his utility belt. She then silenced him by secreting one of his own socks in his mouth. [Gross.]

Locking the cell door behind her, Rosa found the station’s change room, prised open the door to a locker labelled ‘Constable Marina Flake’ and quickly changed into the uniform she found hanging there. She pulled the absent Constable’s cap down to her eyes and marched confidently out through the front door, offering the night shift what she imagined would be a Marina-Flake-style ‘good night’ as she went. She was completely ignored by a resentful room.

‘’Night, Marina,’ said Constable Jeffrey Might juggling brown paper bags full of nutritionally empty food as they passed in the street, bidding the escapee a jovial farewell along with his career.

Pria Kristen, distracted by the phantom ache in his arm, had not yet made the connection between this sudden pain and the broken giant spread-eagled on the floor in front of him. But there was something else tugging at the sleeve of his memory. If Big Ears was lying on the floor at his feet, where was Noddy?

[‘Well, well, well,’ Detective Sergeant Bryan Paterson muttered to himself in three weeks’ time, receiving the very late mail that Rosa Flow was on the lam and thereby reinstating her as a suspect in the Great Easter Heist of the Church of the Mighty [War Against Satan HQ!! ] The deck was full again and mentally he laid the cards out on the table before him. Was it Pria, the gentle Indonesian with a taste for the works of Enid Blyton? Was it the vile Rosa Flow with her toilet tongue and lazy looting of any opportunity that crossed her path? Was Masters deviant enough to shit in his own nest? And what about the curious couple McKeever and Fatso, are their dabs all over this? Surely not McKeever, he breathed. Surely not. Paterson had absolutely no idea.]

For those who arrived late and for some reason wish to try and make sense of these scratchings, the first six installments can be found at thewestsider.com.au/tag/idlefoot/ Leave a note. Ask a question. Warning: it may not help.