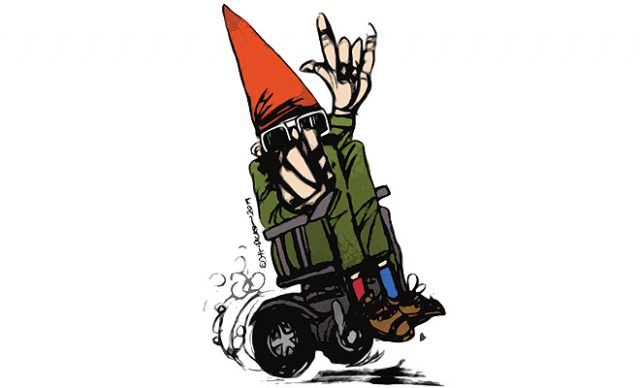 For those of you who came in late, I opened the bottom drawer and out hopped Fatso – a weasel with a taste for sub-law behaviour. This biblically inked wastrel hopes that his buddy, Roger Alan McKeever, will assist him in lifting the burden of Easter tithes from an as yet unnamed church.

Meanwhile, Indonesian migrant and cab driver [sorry…], Pria Kristen, is a devout Christian with an obsession over the works of Enid Blyton. He worships at the Church of the Mighty [War Against Satan HQ!!] whose evangelist preacher, Brother Jimmy Masters, allows this lay pulpiter the Saturday matinee to test his well-meaning sermons. Kristen has innocently interrupted a bout of adult behaviour between Masters and his tireless secretary, Rosa Flow, who has left the scene in frustrated dudgeon.

McKeever is distracted by Fatso’s tat festival. He is shirtless at the sink cleaning his teeth. The muscles responding in his back seem to set ink-Christ off on his pain-filled journey to Calvary. These are jailhouse tattoos on Fatso’s back. Clearly: every character is muscle-bound, full trousered and displaying their own scratchings. Even Christ has knuckle writings and a bayoneted and barbed wired heart on his right forearm. Tats within tats. Apart from some troubling daubings, there are no women. McKeever sighs and tunes back into Fatso’s drone.

‘It’s Saturday,’ McKeever reminds him, ‘what church is open on a Saturday?’

‘Ah ye of little fait’,’ puns Fatso, ‘The t’ing about churches is dat dey are always open. What we need to choose is one dat has da money.’

And he launches into Fatso’s Guide to Episcopal Wealth. It is a spreadsheet of malice, bile and finger-pointing. According to Professor Fatso, the established churches have got it, but have it well hidden; the smaller religions have a little bit, but it’s never in cash; the new churches have ‘folding’ floating down from the heavens.

And that is why Pria Kristen finds he can’t keep his eyes off the strangest of couples in the front pews of the Church of the Mighty [War Against Satan HQ!!] on a Saturday afternoon in early April.

Pria Kristen breaks the awkward silence between him and Brother Masters by stabbing at it with a copy of his sermon. Masters has one eye over Kristen’s shoulder and one ear in the carpark. He needs to know if his harried lover is actually departing or just circling back to the scene of their collaboratum interruptus in the hope that they might later take up what they excrutiatingly left off – his preferred outcome. But the revving engine and the faint whiff of the finest Michelins money can buy says otherwise. So he turns his attention to Kristen’s sermon.

‘What’s all this Enid Blyton stuff? Who the hell is Enid Blyton? Where’s the money shot, Kristen? What kind of return can we expect on this investment?’

‘I know what it’s about, Kristen. What I don’t know is how it gets the flock to reach into their pockets for Jesus! Are you selling these books?’

No, Kristen is not selling these books. Kristen is selling niceness. He thought that perhaps some select readings from Ms Blyton’s oeuvre might loosen purse strings. He splutters out an example:

‘When Connie posits that a Magic Faraway Tree is an oddly old-fashioned concept, she becomes Doubting Thomas, the disciple who refused to believe Christ had risen until he could enjoy the reality check of poking at his wounds.

‘Bessie, a believer, offers this rejoinder: “Well, we must be jolly old-fashioned then, because we not only believe in the Faraway Tree and love our funny friends there, but we go to see them too – and we visit the lands at the top of the Tree
as well!”

Slightly smug, Kristen beams at Brother Masters, ‘I think the metaphor is clear, if not quite seductive, re: return on investment.’

Masters thinks neither of these are true, but his crippled loins are squatting on his ability to continue the debate, so
he grunts:

‘Do Saturday arvo. Bring me money.’

McKeever is not an easy man to camouflage. His penchant for wearing a cone-shaped hat [more traffic than wizard] with heavy white-rimmed sunglasses acting as intermediaries above his rambunctious beard, is a bit of a show stopper. That he is a crumb over two metres tall adds drama to this unlikely spectacle. Pile all of this into a motorised wheelchair and you have a three-act comedy. The only diagnosis that comes remotely close to McKeever needing such a chair is that he is bone lazy.

And there are his hands to round out this little freak show. They are fat puddings that have no neural link to his brain. They are fully independent and utterly random.

Fatso is helping McKeever unload the chair from a purpose-built van rigged with various hydraulic doodads to allow even the most physically compromised to land it gently on terra firma.

They stole the van from a shopping centre carpark in an innocent rural town, changed its colour [once ‘bruise’, now ‘plasma’] and swapped its number plates with those they had five-fingered from an ambulance attending a multi-car pileup on the Eastern freeway. The motorised chair was a bonus that McKeever regarded as a karmic gift and has occupied it ever since.

They are now filling the two ‘disabled’ slots in the cluttered carpark of the Church of the Mighty [War Against Satan HQ!! ] by parking obliquely.

The CCTV footage will later reveal that McKeever was entirely ambulant, if not significantly deft as he can be seen embarking on a kind of excited jig before slumping into ‘his’ wheelchair. Before they eclipse the range of the cameras, authorities will snigger at this outrageous couple as the one silhouette hoppity-bops towards the church’s main doors, while the other completes wheelstands, ‘doughies’ and assorted burnouts more likely to be executed by fully blown street cars in the darker parts of Melton deep into a Saturday night.

[‘Nothing unusual about these two,’ snorts Detective Sergeant Bryan Paterson, stubbing his cigarette and killing the four monitors replaying this farce to the four other members of the Easter Plates Taskforce.]

He is a man used to bending the world to his will. He learnt early that his mere presence was sufficient to prise benefits, favours, privileges, concessions and, best of all, profit from those around him. Even as a child, his parents marvelled at his power to relieve his little friends of their favourite toys and cash gifts they had received from nanna just so they could remain in his gang.

As a teenaged entrepreneur, he embarked on many a dubious enterprise – a car wash service, dog walking, dance clubs, grandparent visiting. When he discovered a large cache of sweets long past their use-by-date, he had his friends package them up in small quantities and sell them as ‘sugar hits’ at school gates, realising a profit of 12,000 percent. When some customers reported strange ailments caused by the compromised candy, young Jimmy [actually, Barry Thoms] recognised the need to consolidate his assets and move on, leaving his ‘associates’ to face the music.

This pattern was to be repeated many times in his life. There was the winding-back-the-clock-car-sales scam [Kevin Muscat], the magical-youth-elixir-from-jungle-plant racket [Peter Date], the lose-weight-through-breathing-right con [Jason Om], the once-in-a-lifetime-opportunity-to-buy-mineral-rich-land-in-Guatemela hustle [Richard Parks] and then there was his favourite – moving 100,000 containers of Air-From-The-Moon for $19.99, or two for $29.99 while stocks last [Colonel Steve Roper].

He was running out of ideas when he read of the success of the new evangelism in the USA and instantly became Brother Jimmy Masters. For five years now he had been fleecing the seekers and there seemed to be no end to it.

Then Pria Kristen turned up. What the hell is his game? What is all this Enid Blyton stuff? Brother Jimmy Masters is worried that his powers are deserting him and he might have met his nemesis.