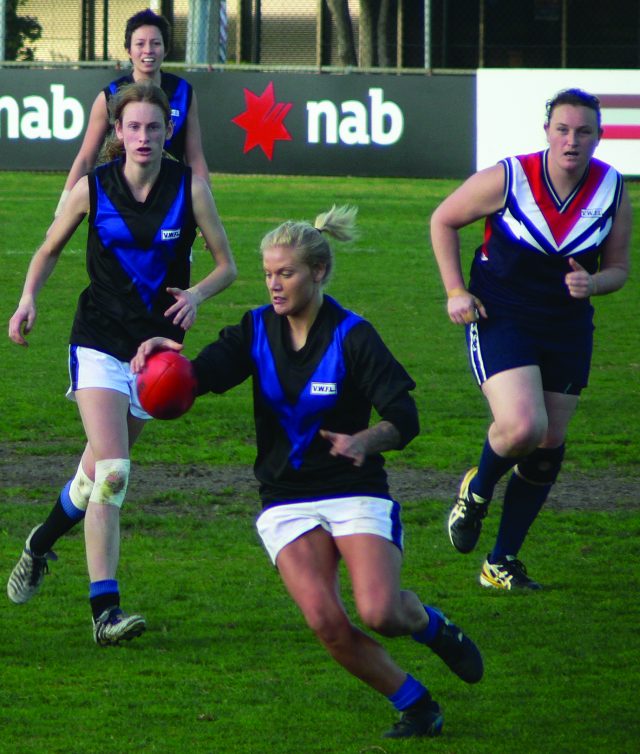 Women’s football is celebrating its centenary- 100 years since its first recorded match- and 2015 is fast becoming a landmark year for women’s involvement in the game.

Over the last few years the Western Bulldogs have been leading from the front of the pack, driving these changes forward. Vice President Susan Alberti has been vocal in the push to gain recognition for the women’s game in Australia, “Women’s football is the fastest growing participation sport in Australia and around 50 per cent of AFL spectators are women so it is important to continue to appeal to Australians of all ages, genders and ethnic backgrounds on the merits of our wonderful game,” she said.

Just over two years ago, in May 2013, the AFL hosted its inaugural national women’s draft. The Bulldogs, and the Melbourne Demons, selected fifty women from around the country to play in a curtain raiser ahead of the women’s round clash that June. It was the first time any AFL clubs had competed in an AFL-sanctioned women’s match.

Aasta O’Connor has been at the Bulldogs from the beginning, captaining the team since that first game, “For a long time now the ‘dream’ has been a professional, national competition for women where we are employed as footballers and can hone our craft in a professional environment,

“That dream is fast becoming a reality, the national women’s league is now inevitable. Gender doesn’t determine your ability, nor your passion, dedication and love for this great game,” she said.

The women selected for the two sides are part of a year of firsts for women’s AFL. Both sides will face off in not one, but two curtain raisers throughout the season. The round 20 clash in August is set to be even sweeter, with Seven Network announcing in April that they will broadcast the game nationally.

The breakthrough follows a vow from league chief executive Gillon McLachlan that the AFL would be more proactive in supporting the historically neglected area of female football.

Change Her Game are a positive online movement raising the profile of women in sport, and Alison Smirnoff is right behind this progress, “The AFL, and some clubs, are really starting to talk about gender equality and the current lack of women in leadership roles. Historically the AFL has been a great leader in driving social change and supporting women in sport is no different,

“If young female footballers can see that the AFL are genuinely moving towards a national competition, it gives them something to aspire to. Likewise for women who are working and coaching at a grassroots level,” she said.

According to the AFL’s own research, women’s football participation has grown in the past year by about 15 per cent, estimating there are 195,000 participants. In Victoria alone female teams have grown by 375%, from 68 in 2010 to 255 this year.

By 2017, a professional national Women’s league, backed by the AFL, is scheduled to begin, forward of its original 2020 goal. The league, which could feature at least ten teams, has accepted bids submitted by the 18 existing AFL clubs, as well as state level and regional teams. McLachlan stating that the AFL ‘should be viewing [itself] as a multi-sex competition’.

Chyloe Kurdas, AFL Victoria’s Female Development Manager, sees these changes as a natural progression of our game, “It was a long time ago that we recognised that we needed to be more than a game that just spoke to white Australian heterosexual men…the AFL, or the VFL, recognised that we needed to do something different to have a greater appeal to the broader community, and to be more inclusive. This is just another part of that. It rebrands the game as not being a male sport; it will become, in the minds of young people in the future, a game that they’ll only ever know as a unisex sport.”

Michelle Cowan has waited a long time to see our game move in this direction. In 2004, at 21, she became Australia’s first female WAFL assistant coach and in 2013 she was the first senior coach for the Melbourne Football Club Women’s side. That year she became Football Woman of the Year and in 2014, AFL DSR Coach of the Year. “We are seeing more women get involved in the game now which is great, whether that be coaches, players, board members or administrators. It’s been a long time coming for many. From a player’s perspective, there’s an exciting future on the horizon for female footballers.

Of course the AFL is in a position to become a legitimate sporting choice for Australian women. That it has chosen to do so is important- not only to expand the sport from its almost exclusively male domain, but to present a massive and scary challenge to others. If AFL can become a gender-neutral sport, then what is stopping the rest?