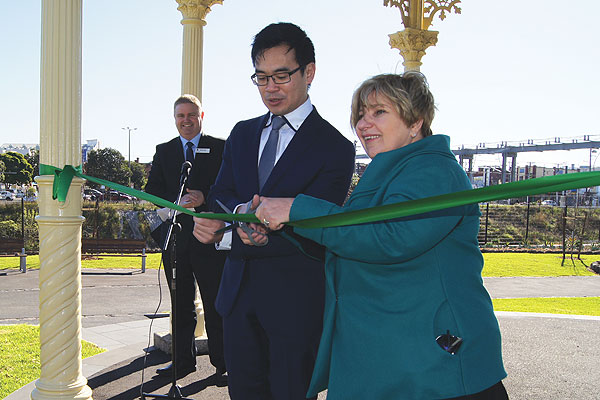 2015 has seen the mainstream media turn their focus on the lack of women on corporate boards, in Parliament and generally in decision making positions in our society. Marsha Thomson MP, the State Labor Member for Footscray kindly spoke with The Westsider about this situation, the development of the western suburbs, and her own journey.

Q: How did you get involved in politics?

I guess I always was. My father was interested in politics, and I was the only one of my siblings to get interested. I can remember as a kid, sitting with him on the couch watching election figures come in. So I guess it was always there and it just became a matter of time, when I actually became engaged and decided to go and vote. I think we can thank the Young Liberals for my joining the Labour Party!

Q: Do you think politics was an unusual career considering your background?

Q: Can you remember when you first thought you could make a difference?

Even as a little kid going to bed thinking about things I saw on TV, like kids starving and those sort of things, I always thought I wanted make a difference, I wanted to be the person who could solve that. Not that I’ve succeeded, but I always thought I could be that person.

Q: What was Footscray like when you first started in politics?

I became the Member for Footscray in 2006. At that stage I’d already been in the upper house in the northern suburbs of Melbourne. Together with the then premier Steve Bracks, we managed to put over $52m into the Footscray renewal project, which brought the community together to talk about how we improve Footscray, what was needed, how to bring jobs to Footscray. For me, Footscray has changed a lot. It’s changed in its demographic, the mix of restaurants, and the housing offer that’s here. So there has been a lot of change in that time. I think if you look at what’s developing in and around Footscray, we are getting a real sense of pride in who we are. I’m actually really proud, and feel like I’m a very lucky individual to have had the opportunity to represent Footscray.

Q: Do you see the Footscray area having a CBD?

It was always the previous Labour government’s intention to turn it into a little CBD, considering how close we are to Docklands. It should be a hub of vital activity, and there’s no place that close to the city with the opportunity, but it just needs to be done right. It really makes sense to bring more jobs to our area.

Q: How do you feel about the new train stations being built?

I’m very proud of the Labour government initiative to improve the train infrastructure, with West Footscray, Footscray and Sunshine stations being part of the development. The separation of metro and regional trains, allowing more metro trains to come through the system. The Sunbury line is one of the busiest train lines, and it means we can have more trains more often, to allow trains to just keep coming in peak hour and reduce wait times.Q: What do you think about making Footscray a university town?

I think that it’s fantastic, given that they have good campuses at either end of the city, and now the facility in the middle. I think the development of the education precinct is great, where education is valued no matter what age you are. To create the kind of facility that allows people to keep learning, that’s a good thing.

Q: Have you ever thought of seeking a Federal seat?

Never! I think that Federal politics is a very hard gig and it’s a particularly hard gig for women. You are away from home for a minimum of three months a year, and if you’ve got kids, that’s an awful lot of time away from family. You get a bit of a disconnect, and it’s not easy to keep going to Canberra and coming home. So your life gets totally disrupted, and I’ve experienced it close at hand while working for Federal Ministers.

Q: With that experience of working for Federal Ministers do you think the environment in Canberra is toxic?

I haven’t spent a lot of time in Canberra for a very long time, so my view is jaded by that. I think that it’s an isolating environment, I think it can’t help itself. There’s 3000 people in Parliament House, when you count all the staff that work there and all the maintenance. You’re stuck in that environment, mixing with only those people. Then your accommodation tends to be with those same sort of people. So I do think it’s hard, you have to make a really big effort to make sure you get back home to your normal life. I think, sometimes people forget that, and I think sometimes MP forget that and get a bit carried away. We all just need to remember at the end of the day, we are all human beings just trying to get on with our lives.

Q: How do you focus on keeping in the job?

I keep concentrating on the things that make lives better for people. I get to engage with some amazing people. You’ve got to look at how to change people’s lives for the better. You’ve got to keep concentrating on the future and not worry about the past, or those things get wound up in the day to day of politics, cut and fast. Education is my big number one, as it got me into politics in first place. Finding the way to improve education is the biggest project for me at the moment, but next is the metropolitan rail tunnel.

Q: How many more years do you see yourself in the role?

I’ve always said that when there’s no more challenges, when I’m no longer excited about getting up and coming to work, then that would be the time to give it away. I’ve been very lucky in having a brief of experiences that mean I’ve got something to look forward to, so it’s not a timeframe set by years. When I think it’s time to hand it on to someone who is going to have more enthusiasm and more drive, then they need to do the job. At the moment I’m pretty excited about what the future holds for Footscray.

Q: How do you feel the last election went with new computer voting booths tested at various sites?

I think technology is fantastic if used properly, so long as you get proper readings – not readings that get misinterpreted – which happened back at the presidential election that lost Al Gore an election. I don’t mind if we use computers so long as you can verify that the person who’s voting is the person who should be voting.

Q: The Liberals want to increase the GST and Medicare levy, what are your views?

I would prefer an increase in the Medicare levy rather than an increase in the GST. I love Medicare, I know that there are people around the world envious of our health system. As someone who has a good income, I would rather see my taxes go to health care for everyone, rather than have a GST that I think affects lower income earners harder than it does higher income earners. And unlike Joe Hockey, I do think the poor drive cars. Bill Shorten has said your healthcare system should be based on your Medicare card, not your credit card, and I think he’s absolutely right!

Q: How is the development of the new hospital in the west progressing?

We are building the new women’s and children’s hospital which will be named after Joan Kirner. We have announced the start of the project, so the architects are being finalised as we speak to design the structure. It will be built on the site of the existing Sunshine hospital, making basically a standalone hospital within a hospital.

Q: Given your constituency contains a lot of migrants, what is your stance on the turn-back policy?

I not only have a migrant community, my parents come from refugee backgrounds. So for me this is a tough one, and I’ve had deep discussions with the shadow minister for immigration Richard Marles. I think the policy as it currently stands and applied by the Federal government, is inhumane! They say it comes from a policy of saving lives, and I want to give them the generosity of believing that’s right, but the rhetoric isn’t. Since John Howard announced that people were being thrown overboard from refugee boats, these people have been demonised. We’ve allowed a fear-factor to be generated in our community that should have never have begun. We have nothing to fear from the people who are coming by boat in the main. There are more illegal immigrants that fly in on planes than will ever come in on boats! The initial argument about boat people was a political stunt, not a real policy issue. The dying at sea however, is real. People are dying coming here, and we do have to tackle that.

Q: What do you think about a quota system for women in Parliament?

As a person who has been very supportive in the Labour party, and part of the push for a very long time to see more women in Parliament, I think this is important. Women make up more than 50% of the population and should be represented in the Parliaments. It has worked in the Labour party so well, that we exceeded the quota of 40%. I believe in the Victorian Parliament we have 48% of women in our caucus, I think 50% won’t be hard for us to achieve, then it just becomes the norm. Most people now don’t even think about it, because we just automatically look for good candidates, women and men equally.

Q: Have you noticed any ageist issues in Parliament?

Well I think balance of community in and outside is important. I think your Parliament should reflect what your community looks like. It’s good to have young members of Parliament, and we have some in their 20’s, then we’ve got some older members. So we’ve got a very good balance across the board, and I think that’s what you need.

Q: After politics, is it still your dream to go on Masterchef?

I hardly ever get a chance to watch TV, and I hate reality TV, but I really like Masterchef. I love to cook, but I watch that show and I go “there’s no way I can do that!” Too much pressure to produce something amazing in a short amount of time, when I just love to cook!