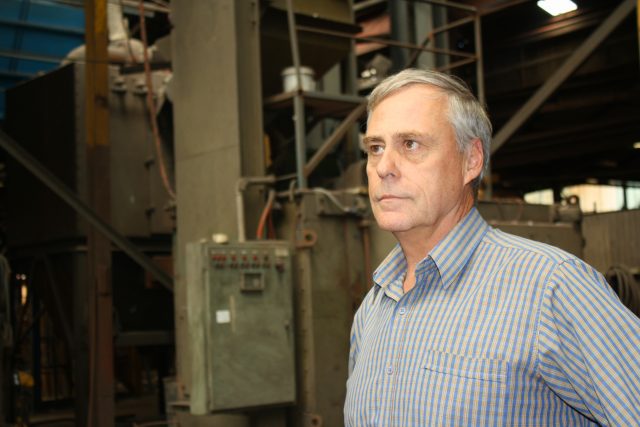 When it closed in 2013, the Graham Campbell Ferrum was capable of the biggest metal castings in Australia. Managed by three generations of the Graham family for over a century, it employed 27 people, some of who had worked for the company for more than thirty years. In March 2013, the company was obliged to switch off the furnaces, and the historic foundry at 260 Geelong Road went cold.

When the Westsider visited the foundry on a recent afternoon, there were just two employees in the office. Previous employees have gone to work in other foundries – one is driving a bus, another moved interstate.  The plant and machinery – tens of millions of dollars worth of great pits, cranes, and furnaces – is blanketed in dust. Thieves have stripped out the copper.

“You don’t have a party when you shut the doors,” says managing director Peter Graham. “It was very, very sad. It was like a close family.”

Graham’s grandfather, George Graham, joined the foundry in the early 1900s, and became company partner in 1922. He worked there until he was 92 years old. In George Graham’s time, the foundry had three main customers: the Tramways, Board of Works, and the gas and fuel company. Business was very good – in the late 1950s, manufacturing accounted for nearly 30% of Australia’s Gross Domestic Product.  Peter Graham’s father, Robert, worked at the foundry all his life. “My sisters and I loved to visit,” Peter says, “It was very dirty. We played with the sand, and chucked lumps of pig iron in the tar pit.” He always intended to join the family business, and joined the company in 1973.

“Graham Campbell Ferrum were world leaders in ductile iron gears,” says Graham. “We could cast up to 60 tonnes – more than three times the capacity of our competitors – and exported all over the world.  We made original parts to specification. We were known for the quality of the product we made for mines.”

Despite its reputation, the company had not benefitted from the much-trumpeted Australian mining boom. Contra deals between mining companies and overseas suppliers, says Graham, meant local industry missed out. “We didn’t get business from Australia. We supplied Russia, China and Chile amongst other places – but not Australia.” There was no particular interest, he says, in working with Australian companies. The long pipeline, and speculative nature, of many mining projects also meant that price was more important than speed and quality. “We could produce a (mining) gear in twenty weeks. Chinese foundries could take two years, but undercut us heavily on price.”

The ups and downs of the exchange rate didn’t help. From around 2011, orders were just trickling in. “We don’t have a local market anymore. We don’t have a pump, valve, truck or tractor industry. The car industry uses castings, but we’ve known for more than five years that they were going to the wall.”

Years of investment in plant and equipment, and reclamation and recycling technology, had reduced the foundry’s waste and costs, making it more energy efficient and competitive.  But other local pressures were taking a toll. “The costs of our electricity kept going up. Without even switching on a furnace, we paid (supplier] Jemena a quarter of a million dollars a year. The cost of insurances, and of waste management, all the regulatory costs kept increasing.”

Graham is frustrated, and saddened, by his own company’s demise, and by the slow degradation of Australian manufacturing.  “Manufacturing is broken. You can’t put it back together now. When we closed, machine shops we worked with went too. The whole chain begins to collapse.” Across Australia, manufacturing now accounts for less than 10% of GDP – the lowest since colonial times.

His appeal, in 2013, for government assistance was unsuccessful. “Because Canberra is Canberra. [The government] sees technology as the solution. But we don’t invest in ideas, we are too slow to pick things up… these ideas go overseas and then we just buy them back again.”

Peter Graham and his remaining staff now do consulting work, reverse engineering parts for mines and factories across the world. It’s skilled and ingenious work and business is OK – but only OK.  They have not been able to find a buyer for their plant and equipment. Perhaps the land will have some value, for just across the road, another massive Bunnings – a great temple to the new economic reality – is being built.

“Bunnings have kept the old Forges façade,” Peter Graham says, “but who is going to care about that? And all this,” – the little original 1920s office building, and the cold foundry beyond – “who’ll care about this? No-one.”