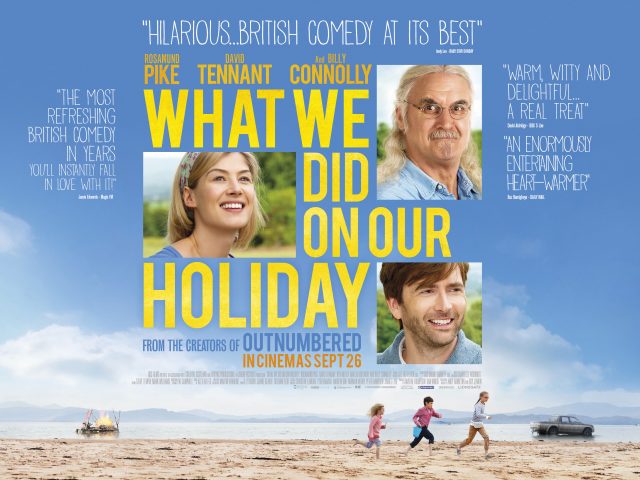 I suspect even the title of this film is Billy Connolly-style tongue in cheek. With Connolly, it’s not what he says but how he says it that makes him so watchable.

In What We Did on our Holiday, Gordy McLeod (Connolly) is dying of cancer. His adult children and grandchildren – the youngest is so eccentric, she had me in stitches – are going through their own emotional upheavals, so Gordy doesn’t tell them he is dying.

The family gathers in Scotland to organise the best birthday party they can imagine for Gordy, but he responds by politely flipping the bird to anything that doesn’t serve his non-conformist, larrikin ways. Gordy avoids obligations and confrontation at every opportunity, smiling and agreeing with his family’s instructions then proceeding to do whatever he wants.

If you have a big to-do list right now, it’s great therapy to watch someone dodge what’s expected with such charm and humour. Gordy is all about simplicity and fun and he’s teaching his grandchildren this in the time he has left. There’s a great scene where he lets a grandkid with OCD drive his truck on the beach, but the real drama starts when his grandkids need to deal with his death. They literally give him the funeral he said he wanted – whether in jest, we never really know – and it’s shocking, but fantastic.

This film cuts through; it’s about what to do with the go we get at life and what’s important for a happy one. That, and kids are so matter of fact about death! This film is a chance to talk about how we deal with death. I didn’t want it to end and as I left the cinema, I called my Mum to tell her I loved her.