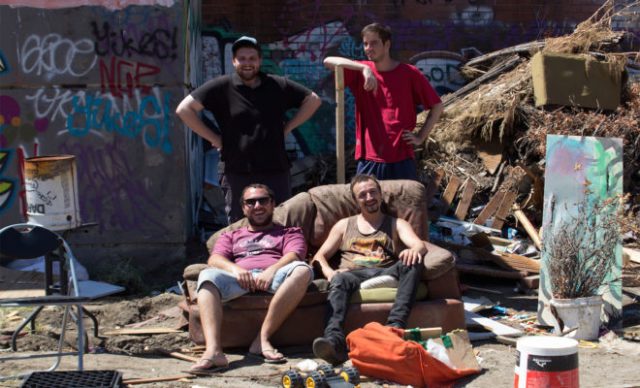 It’s 10pm on a full moon night in March, when Peter, drummer from local band Bunyip, sends me a text saying, “We’re all here if you want to do that interview.”

After seeing these guys perform at  a Lentil as Anything fundraiser at Hotshot recently, I remember in my inebriated state promising to interview them. But every drongo and his dingo knows not to approach the Bunyip after dusk on a full moon!! Shit, this better be good, I think, and off I go with my last stubby of Melbourne Bitter, my camera, typewriter and a can of Bunyip repellent (just in case things get hairy).

I arrive at the ‘Bunyip’s lair’, in the swampy shadows of the old Rising Sun Hotel and a good torpedo kick from Whitten Oval. The entire band is here except for the bass player Glen, who is suffering from a bizarre bout of deep vein thrombosis. “Glen’s done himself a bit of a mischief”, guitarist Sam says.

Bunyip is Sam Gaston on guitars, Glen Trask on bass, Ned Madigan on guitars and vocals, and Peter Camilleri on drums. Ned and Sam write most of the songs, with input from Glen and Peter.

Ned: “When we first started we were all playing in proggy rock and death metal bands and I guess when you’re younger it becomes like a technical wank fest. We got a bit sick of that and thought we’d do something that was a bit of a silly side project, a bit more fun. We jammed for about a year before our first show, and have been together for two years.”

I ask about their self ‘genre-d’ album, Skunge, and Sam explains “Skunge is just a mix of rock and metal really with a heap  of other influences. High energy, good times, funny lyrics, cheap laughs… really cheap laughs. I guess you’d call it a medium play album, seven songs which were all recorded by Jason Fuller at Goatsound Studios.”

Apart from the song ‘Your Mate’, which received airplay on RRR, the rest of the album could be perceived as being not very PC or PG.

Ned: “Generally the reception is pretty positive. I think people know it’s a pisstake, but I’m sure there’s people that have been offended but you can’t help that.”

Peter: “If you don’t like it just don’t fuckin’ listen.”  * Writer’s reminder: Peter is the drummer.

Ned: “I mean most of the album is semi-autobiographical – it’s all honest you know. It’s all just honest shit. Integrity and honesty is very important. There’s the funny, satirical aspect of it, which is what a lot of people will initially focus on, but at the end of the day the songs are just all relatable, especially around the western suburbs. There’s a lot of people going through this stuff, or they’re thinking about that and not saying it. It’s about honesty and communicating with the everyday person.”

Ned: “Which is essentially what we all are. Everyone’s struggling in their own way, trying to keep afloat and all that sort of shit. The next album, because we’re now all working a lot, will be about how work sucks.”

Peter’s been a hairdresser for 19 years, Sam drives a forklift around and Ned works at a bakery.

Sam hints that there may also be a few songs with a bit more serious subject matter – “People with drug problems and all the juicy stuff.”

So what about the new album?

Peter: “The songs aren’t as catchy but they’re more epic, if that make sense – they’ve got a lot more epic-ness  to them.”

Ned: “There will still be smutty humour for sure. We want to record and get it out by the end of this year, hopefully.”

Sam: “We’re aiming for an album a year to keep us busy.”

With Glen being out of action what’s happening with gigs?

Peter: “We were meant to be going to Sydney, so hopefully we still will, end of April. One gig’s confirmed but we’ll try and book another couple up there. Looking at playing gigs in Canberra and Wollongong, packing the Hilux and heading up the Hume.”

Ned: “If we can keep it to two gigs a month, then we’re not overplaying and we still play a substantial amount of shows a year. Keeps us active, but also we’re not in people’s faces all the time. It works because both Pete and I have got kids, so on the off-week we can play gigs.”

There WILL be an album out by the end of the year. In the meantime, check out Bunyip via the links below.