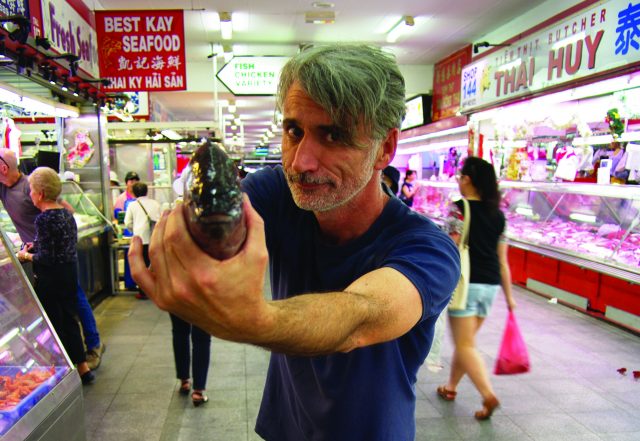 AS TOLD TO… MARIO VARRICCHIO

As I walk into Sourdough Kitchen in Seddon the first thing I notice are the beautiful framed photographs presented on the walls. They’re quite large and framed behind glass and their whimsical nature makes me smile.

The images in Sourdough are all from David’s first solo exhibition ‘I’m Here – Selfscapes of Solitude’ held at Trocadero Art Space in Footscray earlier this year.

“I started exhibiting photos at  happymaree and sold work pretty much straight away, in contrast to music. I also recently put pieces up in Sourdough. You look at the art differently (than in a gallery) when it’s in a café, you don’t look at them as an exhibition.”

We sit for coffee under one of them and I ask David how his first show went.

“The first show was a huge success, it exceeded my expectations. It was all about the involvement. I involved people by getting them to send in postcards which I then turned into a zine and had people read out on the night. I had a musical performance which involved the audience, so it set a standard for me to really involve people in this exhibition. It’s become a bit of a thing now to turn it into an event so this exhibition is going to be an event with performers and games. The opening is on Saturday 28th November, from 3 – 5pm (and runs until 12th December 2015). It’s about the human relationship with fish. The fact that we’re common ancestors, we all came from fish. Basically over 300 million years ago fish developed legs, crawled out of the water, became reptiles and started breathing air. The fish in my photos and the people all came from that common ancestry. I didn’t really know anything about fish and one of the main motivations in my work is doing stuff I don’t know anything about. The last one was about solitude and the thing that inspired me to do that is that I’d never really experienced solitude that much, I’d never travelled on my own and a similar thing to this, I don’t know much about fish so the main premise of my exhibition is just sharing that basic fact that 94% of life on earth is aquatic. I didn’t know that. It’s more or less opening up my discovery process and I’m translating that through visual art. I’ve done that with sound art as well, I had a sound art piece where I interviewed people who spoke a language other than English and I got them to talk about music. I didn’t speak any of the languages so I made a sound work out of what they said and it sounded like music to me because I couldn’t understand what they were saying so really I was fascinated by people who speak other languages. It comes from that same thing again.”

The sound piece is called ‘Babel, dancing about architecture’ and can be heard on Soundcloud.

“I’ve studied music composition, I’ve done stuff for Federation Bells,  was a resident composer in that I wrote a piece that played there for 2 years. I’ve done sound design for theatre and also ABC Radio National. I’ve played in bands but it’s not really where my passion is, my passions composing and creating art. It’s all about composition, in sound and in photos. There’s immediacy with photography in that I can immediately compose without knowing the technical side of photography, I could immediately use it as a tool for composition.”

David is a self-taught photographer but in a short time has had his images exhibited interstate in Perth and internationally in Paris.

“At the moment two of my photos are in Paris for the climate change conference, COP21. Two of my works have been accepted for that. I applied for that through Alliance Francaise. The exhibition is called ‘Climate State of Emergency’. They’re actually going to be exhibiting the works here in December and January. Basically, I just Googled ‘photographic competitions’ and up came the Alliance Francaise one, it was about climate change and I knew I had works that relate to that and I’m certainly interested in climate change so I entered ages ago. When you enter competitions it takes a long time, it might be 8 months before you hear back from them. It was a photo exhibited for Portrait Prize at the Perth Centre for Photography. I had a portrait of someone from behind, basically their hair, and the back of them. I don’t really do portraits but I just put it in and they accepted it. I’m waiting to hear back from a couple of others. You’ve got to constantly be entering your photos in things, sometimes that cost money and sometimes it doesn’t. You’ve got to look for some credibility in what you’re entering, have a look at where it is, previous prizes etc.”

I mention to David that it’s possible his images might be Viewed by world leaders in Paris.

“Well yeah, that’s right. It’s on the COP21 website so there’s a chance people attending the conference will anyway.”

I ask David about his use of the female form in his work. 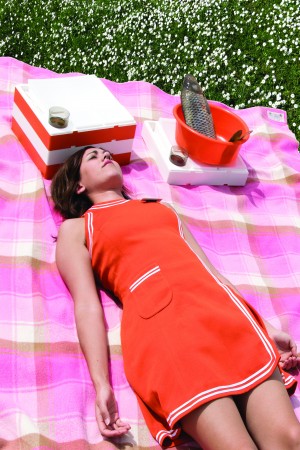 “There’s several reasons why I use the female form I guess. One is the history of art, it’s a trope a cliché I suppose, two is that, this is where it gets tricky, I find women beautiful and so do women. It does sound suss but its more about the history, because it belongs in the history.  This show I’ve gone for more of a setup and used a lot more props. I’m not using professional models, and giving them something to hold is good, plus I’ve gone for more of a concept. A female figure kind of fits into a landscape because of history or whatever but you put a male in there and the focus is immediately on that person. Another one of the main reasons is clothing because dresses have interesting fabrics and colours that male clothing just doesn’t have. I’ve been using all second hand clothes and in some case designers like Hellpixie. That all just adds to the composition. All the subjects in the photos are people I know of different ages mostly over 40.

I see my photography increasingly involving my music and visual art in collaboration. This time (the show) is involving performance art and really just crossing over.

I relate a lot of things to music, I never wanted to play in wedding bands or cover bands and my guitar technique wasn’t good enough to do all those covers, I mean I really admire all those people. I think it’s the same with this (photography). I see myself as an artist not a photographer so that might take different forms. I’m just interested in the creative process.”

The exhibition has involved buying lots of fish, dead fish.

“I’d been buying fish from a place in Footscray Market for over a year, that’s what started me on it, I had a photoshoot in the ocean and I thought fish might look good in this, so I went to FM and the cheapest fish I could get was Barramundi and I was shocked by that. That Barramundi is now farmed in a river in Taiwan and brought over here. That’s what started the whole dead fish exhibition. Then I planned all these shoots and I went back to Footscray Market. They had some great fish with a green tinge on them and I said ‘What are they?’ and the guy goes ‘Ahhhhh….just no name, no name fish.’ I was pretty much shocked at how available fish is you know, I just thought they were a precious commodity.”

Finally I ask David for any advice he may have for other people picking up a camera.

“There’s an amazing amount of people out there who have a lot of technical knowledge and are really into photography but they don’t do anything with it. One thing I’d say would be to carry a camera all the time, not just your phone, carry a camera then you’re concentrating on framing things and your thinking about it as you’re doing it. The other is to develop a theme whether that’s a style of shot or location or concept like mine. That way you’re putting your own original stamp on it. Confidence that what you’re doing is unique it’s your own voice.”