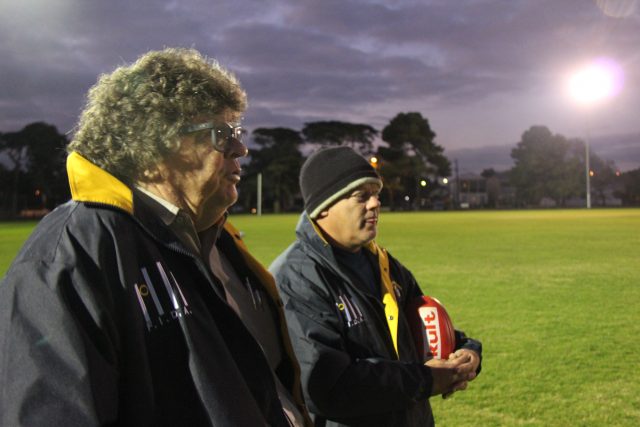 For any one of a multitude of reasons, many people with Intellectual Disabilities are reluctant to involve themselves in local activities. Some feel they aren’t capable, or fear they won’t fit in, or are just plain wary, having been misunderstood or even discriminated against in the past.

So to see the level of involvement and passion on and off the field at the Williamstown Seagulls FIDA (Football Integration Development Association) Football Club, is not only heart-warming, it’s faith restoring. But clubs like this don’t run on good vibes alone, it takes hundreds of hours a year from dedicated people – coaches, trainers, umpires and parents – to keep a club like this ticking over. Guys like Vin Maskell, Glen “Bull” Evans, and head coach Rob Klemm, who recently spoke with The Westsider about footy, volunteering and giving back.

Q. Many people wouldn’t realise this association exists – when and how did it start?

A. This league started in 1991 in what was then the Hawthorn City Council. They have an ‘access all abilities’ now, but back then it was just a come and try day for people with disabilities. They thought they might get 10 or 15 people turn up and just have a kick of the footy and just see if people enjoyed it – 95 people turned up. They realised there was a big demand for people with disabilities who really wanted to play footy. Lots of these people with disabilities tried out for footy teams when they were little kids, but if they don’t understand what’s going on or they’re not quick to learn how the game goes, they get left out. So they started a competition with 4 teams, by the end of the year they had 8 teams. There is a footballer called Peter Ryan who played for Hawthorn and also Williamstown, and he was a teacher at Broadmeadows and became the president of the association. He started running the organisation and meetings and that’s how I got involved because I was working with him and he asked if I wanted to be a coach and I went along and met these guys, started coaching and am still doing it. The competition now has 18 clubs and 25 different teams – we have two different teams, seniors and reserves. We also have a city versus country game and for the third year in a row we have the national carnival, all the teams from other states come to Victoria. Williamstown is in the country team because we needed to make the numbers even. Country has won two years in a row and is the national champions right now, and I was the coach of the team – that was an amazing feeling for the volunteers who support the footy club.

Q. How did you become coach of the Seagulls?

A. I was actually the coach of the Broadmeadows Kangaroos for about 16 years. That started because I was teaching at a special school in Broadmeadows. At the end of that time I was not teaching at Broadmeadows anymore and we decided to close it down in 2010 at the end of that season. It was pretty sad as it was actually one of the oldest clubs that have been in the competition but we didn’t have enough players; we were training on a dirty old soccer pitch and didn’t have a proper club room, which we have all here at Williamstown. Williamstown CY the amateur team and the VFL team here were looking to do some things in the community and they wanted to start up a FIDA team. Since I was working in this area, I was asked to help get things started. A lot of the players (not all) have left Broadmeadows and came across here. We also have a lot of new guys and girls from this area. We have 4 girls at the club that play in the team.

Q. Do you need qualifications to get a coaching position?

A. Yes you do. Most people have a Level 1, 2 or 3 coaching qualification through AFL Victoria. I actually don’t but because I am a teacher with a special ED qualification and because this is a competition for people with intellectual disability who go to special schools, I am allowed to coach in this competition.

Q. What is your football background?

A. When I was 9 I started football training – but I didn’t get a game until I was 10! I had a couple of really good coaches in juniors, one was a policeman, another was an old footballer. They taught me that football is more than just winning and that you can do a lot of things in football that are good for the rest of your life. I played junior football in WA country until I was 18, then I went to Perth and played in the amateur competition there. I taught in the country in WA for a couple of years and then I moved to Melbourne and didn’t play footy for a while until I got involved in coaching.

Q. What are the time commitments?

A. There is an hour and a half of training every Wednesday night, but then because we finish training when it is dark and there is a lot of school age kids in the club I make sure they all get home safely. I spend most of the game day folding jumpers and packing the bus with all the stuff you need for the game, opening the canteens and putting up the scoreboards up. All that starts at 9:30 and the games start at 11:00 and 12:30 on Sundays. We have a committee which meets once a month for about an hour. There is no simple answer to that – it is not just 3 hours or whatever, it takes as long as it takes. There is lots of things to do and you’ve got to make sure they are all done so that the club keeps going and the games happen.

Q. What is your biggest challenge as coach?

A. To teach and encourage players that when they get hit hard that they don’t get up and retaliate or start a fight, so we teach them when you play footy you’re here to play footy, if you want to fight go to the gym and do boxing – that’s something I’ve been preaching for 20 years. Also in the grand final last year, half way through the last quarter we were 5 goals down and the opposition team started pushing and shoving our players and I think through our coach’s instruction over time our players were not getting involved in it and concentrated on playing football. We kicked 5 goals to none for the rest of the quarter and won the game. It is so hard to coach into players because the natural thing is if someone gives you a whack that you give them!

Q. What role do volunteers play?

A. The mum of one of our players does the scoreboard every home game, she sets it all up, she does the time-keeping and she knows how to do all the scoring. She also does it at Airport West in the EDFL, she’s been doing that for about 30 years. Without volunteers the players would be turning up and there’d be no drink bottles, no clean jumpers, the padding wouldn’t be around the post, the umpires wouldn’t be organised, the coach’s boxes wouldn’t be ready, the canteen wouldn’t have any food. It’s all volunteers, and players in most clubs probably don’t realise how important the volunteers are. They think they just turn up, put a jumper on and it all happens like magic. But it’s actually lots and lots of people doing things in their own time.

Q. What advice would you give to anyone wanting to volunteer?

A. The best thing is to say to someone, come down and ask if you can join in and help, all footy clubs will say there’s always a little job that you can help out with. That’s a really good way to get into it, just by being there, saying “G’day”, watching and supporting. Someone will come up to you and say “can you give us a hand with this”, and you’re in. That’s a really easy way, just be there supporting the game and being available.

Q. How do you balance being a principal and coaching football?

A. It’s not really balanced at all, it’s just very very busy! I work 5 days a week obviously, usually at school by about 7:30, most days I finish at 5 o’clock or later. On Wednesdays straight out of a meeting, I have the bus packed with all my footy gear, straight down here, I usually pick up a couple of players on the way. I think if you just go to your job and then go home and watch T.V, you don’t really have a good balance in your life. If you’re doing something extra that helps other people, that’s the part that balances your life. I use footy training, I try to walk two or three laps at training, just talking to the players. That gives me a bit of exercise away from sitting at a desk all day. It’s hard to balance, but there’s twenty-four hours to every day – you can always squeeze a little extra in. It’s all volunteers, and players in most clubs probably don’t realise how important the volunteers are.

Q. What are your future goals?

A. Keep the club going successfully! I don’t want to stop doing what I’m doing ‘cause I really love it, but if the club’s going to be any good and to be able to go on I have to be able to put people in positions, ready so that if I get hit by a bus there’s other people who can run it. That’s the biggest goal you can have – that when you finish doing the coaching and all the other stuff that you do then it doesn’t just stop. I’m not ready to give up yet so I would think probably in the next five years or so I would be aiming to be stepping back from things a bit. I love coaching, all my organising, I love working with the players as individuals and talking to them, they all have different things they need help with. Sometimes it’s all really positive for me too.

Q. If you could coach an AFL team, who would you coach?

A. This is gonna sound really weird but I grew up just near Fremantle and I reckon wherever you’re born, wherever you grow up, that’s kinda where your AFL team is. So my AFL team is Freo. I also have a really soft spot for the Bulldogs, they had a really rough end of last year and the way they’ve turned it around this year and the way they’re going, I think they would be an exciting unit to coach
as well! 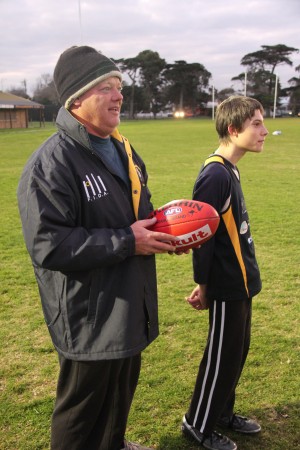