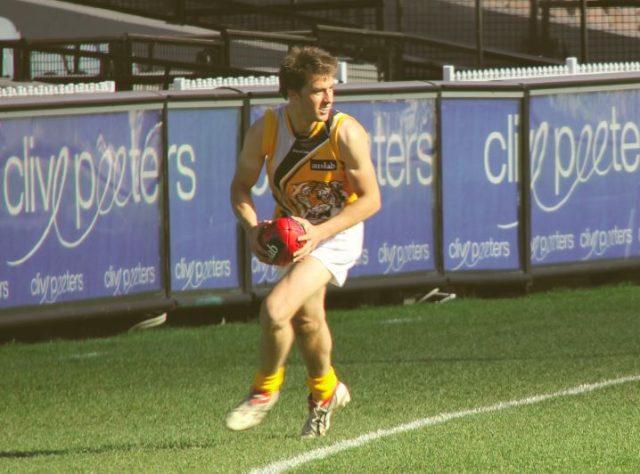 The 2015 AFL season to this point has seen the longest standing coach in the history of the game get the sack (Mick Malthouse) one of the greatest players in the modern era retire due to a career ending knee injury (Chris Judd – and that’s just Carlton’s season. Fremantle sit on top of the ladder and Nathan Fyfe is dominating the competition, having the Brownlow Medal pretty much ‘wrapped up’ if you go by most television and newspaper awards.

Elsewhere, the GWS Giants have shocked everyone by only being out of the top 4 on percentage in just their 4th season in the competition, and yet the Gold Coast Suns, who entered the AFL a season earlier, are sitting last when they arguably should be performing better than GWS. Sydney and Hawthorn are in the top 8 – but that doesn’t surprise anyone – and Brisbane, Melbourne and St Kilda are still rebuilding and developing their teams.

Richmond are in the 8 and after making the finals 2 years running, and have gained momentum after winning 4 consecutive games. They look destined for a 3rd successive finals berth – but can they win a final?

The West Coast Eagles and Collingwood are sitting comfortably in the top 8 surprisingly, considering neither made the finals (and finished in the bottom half of the ladder) last year. Jesse Hogan is the most exciting young player under the age of 21 at the moment and is favourite to take out the NAB Rising Star award. Some of the players having outstanding seasons are Eddie Betts (Adel), Josh Kennedy (WCE), Shane Edwards (Rich), Dan Hannebury (Syd) and David Armitage (StK).

The second half of the season will be interesting – can anyone from outside the current top 8 make the finals by seasons end? History says the top 8 doesn’t change much from this point of the year.

ADELAIDE – Had a great start to the year but have dropped off recently and need to pick things up if they want to make finals.
BRISBANE – Injuries have hurt and it hasn’t helped that Tom Rockliff has had a horror run this year.
CARLTON – What can we say? Unfortunately for the Blues the 2015 draft crop is not great – no Kruezer cup this year.
COLLINGWOOD – They have been lucky with their draw and the real tests come in the second half of the season.
ESSENDON – The WADA issue is starting to take its toll and they could find themselves finishing bottom 6.
FREMANTLE – Top of the table and going along smoothly as you would expect from a Ross Lyon coached team.
GEELONG – Blooding some exciting young talent and playing well but probably not finals bound this year.
GOLD COAST – Have had the season from hell and it doesn’t look like its going to get any better.
GWS GIANTS – For such a young team they are 2-3 years ahead of schedule in terms of expectations.
HAWTHORN – Just slipping into the top 4 at this stage but don’t be fooled into thinking they wont be a contender come September.
MELBOURNE – Improving and still need a lot of work but they are showing signs of playing as a team.
NORTH MELBOURNE – Not sure how to judge the kangaroos as they have been hot and cold again.
PORT ADELAIDE – Lost some close games and probably too far behind to make finals. Have won 10 of their last 25 games – a worry for coach Hinkley.
RICHMOND – Look like making finals for a 3rd year running and are playing some outstanding footy at the moment. The finals dark-horse?
ST KILDA – They have 4 more wins than most experts predicted – a huge tick for the Saints.
SYDNEY – Going along nicely and it looks as though they are priming themselves for another deep run into September.
WEST COAST – Considering injuries to key defenders they are performing well and Josh Kennedy is having a great year.
WESTERN BULLDOGS – Started the year by causing a few upsets and have been inconsistent since, still in the mix but must win some close ones .

PLAYBOOK PROVIDES GUIDANCE ON AND OFF THE FIELD