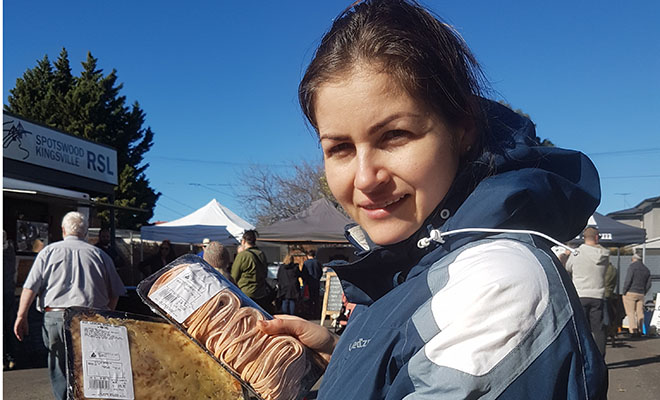 Galya Chavkina loves Italian food and the beach. That is why she is so comfortable in her dream life here in Melbourne.

Galya came to Australia because she always wanted to have a Summer birthday. As a little girl, she used to nag her mother for a February birthday away from the frozen winters of the old USSR. She dreamt of living near the ocean where she could spend her time on the beach. Her mother, a Soviet-trained mechanical engineer, used to say, “Galya, one day you can choose where you want to spend your birthday.”

Galya kept her mother’s words at heart when she entered culinary school as a young teenager in Ukraine. At seventeen she left for Rome where she found a job in front of house at the Hilton where she worked for six years, still dreaming of a Summer birthday.

When the time came to apply for a working holiday visa, she shortlisted her choices. Canada? Too cold. Emirates? Too hot. What about Australia? Yes! “Yes, because I can finally have a Summer birthday.” Also, she could choose any kind of climate across the wide island continent.

When she arrived in Australia in 2009 the first observation she made was how alive the country is, with shades of green all-year-round. And when she saw the grasslands along Melbourne’s beach-front, she knew her dreams of living by the sea and having a Summer birthday had been fulfilled. Since then, Galya has loved her Australian dream.

Her first job was with The Natural Pasta House in Highpoint. She was hired as an employee and soon became a friend and now is the owner. She sells premium quality handmade pasta at farmers’ markets around Melbourne on the weekends, and to gourmet shops during the week.

In her spare time, she enjoys the beach with her daughter. Laying on a beach towel in the hot Australian sun, she often thinks of her Italian grandfather escaping the war and meeting her Maldivian grandmother and the actions that set in motion the events what would become the life and dream of Galya.

But she doesn’t reminisce about the old country too much. She loves and enjoys the food and produce of Victoria and finds cooking Italian cuisine helps her stay connected to her heritage and family history.

You can find Galya at the Slow Food Melbourne Farmers’ Market at the Spotswood RSL on the 4th Saturday of every month.