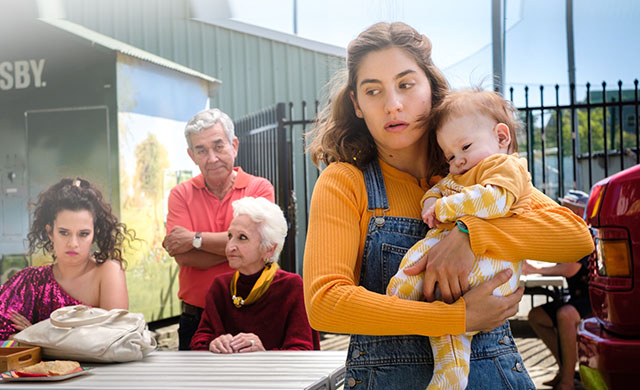 Bump is a new 10 part series set in Sydney, Australia.

Co-created by Claudia Karvan and Kelsey Munro this Stan exclusive content has brought us another Aussie drama series that we know and love. This show is about a teenage girl named Oly who has a child – it was a complete surprise as she didn’t even know she was pregnant. Now her life has been flipped upside down. With an all Aussie cast this is an epic coming of age story that I feel is pretty unique. This series has a lot of life in it as it also explores the different cultures around Sydney which I reckon is awesome, and it adds something more than just a story about teenage pregnancy. It also follows a struggling marriage between Claudia Karvan and Angus Sampson who are amazing. But it is the young actors who have really shone through; emerging stars Nathalie Morris and Carlos Sanson have done an exceptional job in their first major role. I really have no bone to pick with this show, it’s a simple creation that isn’t trying to be something it’s not but yet again that’s why I reckon Australian productions do so well -it’s a vision that the creator has had and then made. Already this Stan series has shown its success, and renewed for a second season for which I will eagerly await. Most will go over the heads of a younger audience but will fit in nicely with teens and adults.

I AM NOT OKAY WITH THIS