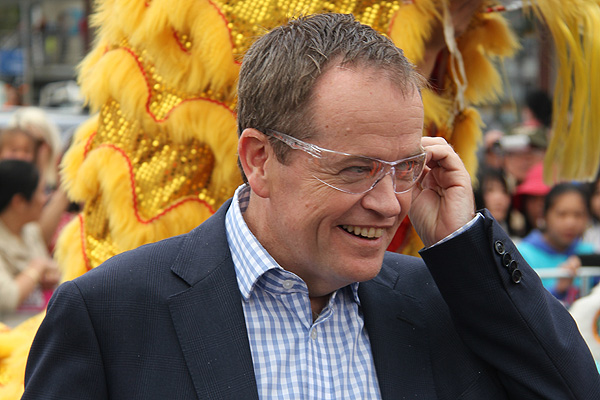 Not short on vision – Bill launches the Lunar Festival

For all Bill Shorten’s efforts on the national stage, many don’t realise that he’s also Federal Labor Member for Maribyrnong. Bill caught up with The Westsider at the opening of the Lunar Festival in St. Albans and kindly answered a few questions devised by the team.

Q Does the Federal Labor party have a specific plan to combat unemployment in Melbourne’s West?

Bill Look the growing unemployment in Melbourne’s West needs to be taken seriously. But at the same time we are seeing a record number of people out of work; I feel the Abbott Government is making deep cuts to those very things that can assist. The Government’s abandonment of the manufacturing sector, cuts to research and innovation, as well as the removal of funding for local youth employment services like Youth Connections and Partnership Brokers are all ridiculous. On top of all of this, they are now trying to force students pay $100,000 for their degree which I think is foolish. For some local students, that probably will mean that the goal of attending university is simply far-fetched.

I think the key to addressing unemployment is to increase investment in training, skills and education. Australians need to be in the jobs of the future – and jobs with a future. We also need to see better engagement with business, particularly small business, to create opportunities for local employment.

Q Does the Federal Labor party have any infrastructure plans that might help relieve the pressure on public transport and roads in the West?

Bill Of course. I understand the importance of investing in both roads and public transport. That’s why when I was in government I invested in local projects like the Western Ring Road Upgrade and the Regional Rail Link. Labor will continue to listen to state government and local communities alike about their needs.

Q What’s your view on the East-West tunnel project from a Federal perspective?

Bill Well there needs to be an ongoing and forward-looking planning approach to help ease congestion. But any solution must include investment in roads and public transport, including rail. By saying this I need to make it clear that the investment in our roads should not be built at the expense of public transport. The whole episode also makes clear the need for a transparent and rigorous process to assess infrastructure projects, ensuring that funding is allocated to projects with the greatest benefit to the state.

Q Could anything have been done to save the automotive industry in Australia?

Bill It didn’t have to be this way – it was a consequence of the Abbott Government’s decision to walk away from the industry. Even worse, the government has demonstrated no real plan for the workers affected. I have not seen any provisions to ensure that the valuable skills of these workers are not lost.

Q A perceived lack of unity damaged Labor’s brand over the last few years, have Labor learned from this?

Bill To be fair, the Rudd and Gillard Labor Government’s achieved a lot of great things. Look at the National Disability Insurance Scheme (NDIS), the Gonski education reforms, increases to the aged pension and the childcare rebate. We as the Labor party understand that Australians don’t want to hear us talking about ourselves; they are more interested about our plan for the nation.

Q Do you think the voters who swung to the Liberals in the September 2013 election now have the government they wanted and expected?

Bill I think the community know all too well what the Liberal Government is about. We know that Liberal Governments do not support the most vulnerable or promote equality and opportunity. That’s why their cuts to health, education and pensions did not come as a surprise. But at the same time, I think we are all shocked by the sheer duplicity of the Abbott Government. The things they promised not to cut were the very things first on the chopping block.

Q What is your view on the legitimacy of climate change and do you support environmental policy and legislative changes?

Bill I believe that climate change is real and the science backs that up. Unfortunately, while the rest of the world has moved to act, the Abbott Government has buried its head in the sand. Tony Abbott’s climate policy is a joke. It won’t achieve Australia’s required emission reductions, but it will cost taxpayers billions of dollars. He has chosen to pay big polluters to keep polluting in a scheme that all of the experts have said won’t work.

Q How do you combat the current lack of balance in the media?

Bill Well the media is changing, and the way we approach it is changing too. We make sure we are listening to and engaging with Australians from all walks of life. It will be a goal of mine to continue to talk to people in whatever way we can – whether it be through traditional media, social media, alternative and diverse publications, online sources and of course community papers like the Westsider!

Q If Labor wins the next Federal election and you are leader, what would you see as your first priorities as Prime Minister?

Bill I won’t be taking anything for granted. We have a long road ahead of us, and our current focus is listening to the Australian community and preventing as much of the Abbott Government’s destruction as we possibly can. We will always stand up for the fair go, for universal healthcare and for education.

Q OK thanks for your time Bill, lets end with a tough one….What football team do you support?

Bill Oh dear, although it might cost me… Collingwood!