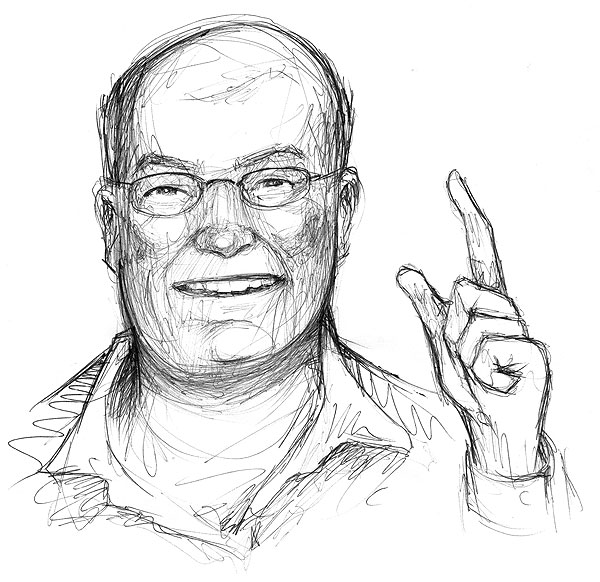 Can’t afford a cleaner? Scratched your iPhone 6 screen? Emojis cramping your style LOL? Then just lie back, get yourself comfortable, take a deep breath, and talk to Pete…

Here’s one for you Pete. My husband keeps hanging around whenever one particular friend of mine – Jenny – visits. At first I was slightly threatened because I thought he might fancy her, then I realised he was piling on the charm because he wanted to befriend her, just so he could go around saying “Ma friend Jenn-ay” in that stupid Forrest Gump voice he loves to do after a few drinks. It’s embarrassing, but what can I do?

Pete says: “What you should do is… just let him hang-out with Jenn-ay! Seriously that joke has a lifespan of maybe two dinner parties, and then your husband will have to find new jokes, but in the meantime he’ll be stuck with this boring friend Jenn-ay he doesn’t want. Wow that feels good to say though! I’ve wanted a friend called Jenn-ay for years too! It all started when I was a younger man and I had a crush on a girl named Tiffany. Oh how I wanted to get to know her better, and perhaps somehow end up at her place for breakfast – I didn’t even need a big fry up – just a coffee and a croissant would have sufficed. And then in the ’80’s there was this guy named Bernie. He was popular, handsome, sporty, and effortlessly witty. I had a man-crush on him before the term had even been coined, and would have happily spent a weekend at his place. But anyway, since I met Stella(!), I’ve matured and managed to put this sort of silly behaviour behind me, so don’t worry, even if your husband does fancy Jenn-ay, eventually he’ll find something about you Mary and forget all about her.”

Pete, what is it with butchers? I ask for four sausages and get six, two pork chops seems to translate as three, and a kilo of eye-fillet weighs a kilo and a half? It’s like they’re taunting me with their excess meat.

Pete says; “What you should do is… Play the game Eileen. It’s a well-known fact that butchers are direct descendants from the stall-holders of the great markets and bazaars around the world, where confusion reigns and haggling is king. They have made an art out of mis-hearing, crooked translation and sleight of hand. So if from now on you need four sausages, ask for two. If you’re after two kilos of chicken mince, ask for one, and if three kilos of tripe is on your menu, order two! And if you still don’t get any joy, you could always become a vegetarian, but beware, in the murky world of green-grocers, asking for six carrots in most circles actually means you want a dozen, plus a bushel of turnips and a full Golden Nugget pumpkin – they’re trying to put their kids through private school too you know!”

Hi Pete, just a simple question about receding hair – when do you know ‘it’s time’?

Pete says; “What you should do is… Cling to every last strand my friend! The inevitable shaving of your hair is like losing your wisdom teeth – painful, awkward and hard to talk about without your eyes starting to water. And once they’re gone there’s no way they’re coming back. But when is ‘it time’ you ask? There’s not a man on earth that willingly admits it’s time, years of bad comb-overs, dodgy rugs and miracle transplants are a testament to that. No, those of us who do bravely forge ahead into that follicle desert had close, trusted lieutenants in their inner-circle on 24-7 ‘bald watch’, ready to challenge with every suspected widow’s peak, bare patch and missing tuft. Look around you Eric, they’re there, the true friends who will tell you if you’ve missed a bit shaving, forgotten to zip your fly or are suffering from chronic halitosis.”