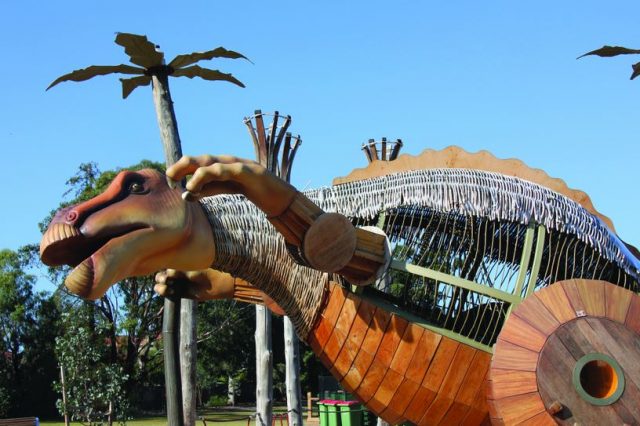 Twenty-five years ago, a small design and construction practice with big ideas took a punt on a dream and an abandoned factory on the banks of the Maribyrnong river. Today BiGfiSh partners Alfons van Maanen and Renata Slusarski and their team of fabricators spend their days turning those dreams into some of the west’s – and Australia’s – best known and most innovative industrial art  installations. The Westsider visited recently for this conversation.

Q. When was BiGFiSh established?

A. In 1990. I was driving past with my husband. All of the riverside was disused. This was an old disused factory, really dilapidated. We approached the council that owned it and got onto a fellow who was sympathetic to our cause and said ‘artist, great!, move in there, cheap rent’. We just wandered over there and we are still here.

Q. Where did the name come from?

A. It was actually our first job. Melbourne Uni used to have a ball called the Chocolate Society Ball at the Exhibition Buildings, that beautiful building on Victoria Street. The theme that year was ‘underwater’ and came to us for that job. They said “we need a underwater theme, we’ve only got this much money and can you do it?”. The first image we did was a big fish and Michael (one of the BiGfiSh members) said “that is not a bad name”. We don’t sell fish but we can make fish!

Q. Where did you get your ideas from?

A. Thin air. No, really, that is really difficult. After years your brain is always just generating ideas. You also train yourself to see things, to pick, to absorb visual landscapes and everything around you. Sometimes you are not even aware. For example you see a street sign, something here, something there and they come together to form an idea. It is something you develop over the years and is honed through practice. Also, brainstorming ideas with other people helps.

Q. Is all the work you undertake commissioned?

A. Work is usually commissioned, tendered or through expressions of interest. Sometimes we do little community benefit projects like our project at Saint Monica’s Primary School down the road. Whether its making little grass boxes or decorative trees, the teachers will talk to the kids then the kids will do some drawings that they want to create, they show us and we go yeah we’ll make that.

Q. Do you do local or smaller private jobs?

A. Sometimes we do little community benefit projects. We also do non-commissioned work just when we feel like it, when we’ve got time. We did a crate man hanging out of the tree out the front that was made from crates and hung on the tree for probably a year. Parents with children people walking their dogs look at it and are like “What is that?” a big crate mobile?

Q. Did the Council tell you to take crate man down?

A. Ha ha, no. The Council is great they’re our landlord, but the nice thing is after twenty odd years, we’ve got a relationship and even though staff has changed there’s this sort of unwritten rule that BiGFiSh are part of an arts precinct. So no, I think it just disappeared.

Q. Do you have a project that you consider your ‘break-out piece’?

A. A program in Canberra at the Project wells national art. It was a break-out because it was a long way away from home and there was a lot of project management, it was a nice three dimensional naturalistic end result. Almost every project pushes us, it feels like sometimes we are reinventing the wheel with every project.

Q. What is the hardest piece you’ve put together?

A. The little projects are hard because you do them with tiny budgets. Its not always the budget that is hard it can also be the people, they come to us with attitudes or they don’t value our expertise or experience they just want the job done for the cheapest price, which we cant always do.

Q. The dinosaur in McNish Reserve in Yarraville is one of your most popular and visible pieces currently. What challenges did you face building it?

A. The installation is opposite a child-care centre and we obviously had to comply with all sorts of regulations. We measure every hole, every drop, all to ensure kids stay safe and don’t get their hands or heads stuck anywhere! It looks scary but actually it was based on the herbivore Muttaburrassaurus which roamed Australia in pre-historic times. We like “Dorothy” as a name but “Mimi” is the one that stuck.

Q. You’re working on an Urban Bouldering Sculpture as part of a new public space in Wilson Avenue in Brunswick currently for the City of Moreland. Tell us about the logistics of creating and installing the piece.

A.  The sculpture designed was by Stuart Beekmeyer from Bouldergeist. The assembled weight will be about tons including the boulder, roof and lighting/electrical). When its ready we’ll have to place the piece on wheels to squeeze it out of the workshop. We’ll be using a 50ft crane to lift it into position as the closest we can get to the footing is 15 metres away from the nearest possible truck position. We’ve designed it so that the angles accentuate at the top to stop people climbing above a certain height. That and the dome on top should put most people off! Like most installations with physical interaction we have the usual soft landing to surround the piece, and as its lit from the inside, we’re excited to see how it lights up at night in that sort of urban setting. The eastern end of Wilson Avenue (Sydney Road end) is now permanently closed to vehicular traffic. Some underground stormwater and drainage relocations have slowed the launch but it will be June sometime.

Q. What skills did work for the dole participants learn?

A. They learnt how to use different types of tools and equipment as well as working in a group. We had them working with fibre glass and they also did a lot of welding which they enjoyed. Hand skills and receiving instruction were also some of the techniques they enjoyed.

Q. What sort of international work have you done?

A. The big guy that’s out the front of the Village Cinema at Sunshine we also made one for Taipei but that is it, we are more local apart from that piece.

Q. Do you use recycled materials?

A. We try to use recycled materials as much as possible. We have done a lot of work with City of Yarra with recycling campaigns.

Q. Where do you get your recycled materials from?

A. We get most of our materials from Council depots.

Q. What kind of price tag is attached to some of the bigger pieces?

A. It can range from anywhere in between of fifty thousand dollars to a quarter of a million dollars, we have clients who if they want a little job done and its under that then we are happy to do that for them.

Q. What was the piece that gives you the greatest satisfaction having completed?

A. We made four big timber chandelier light figures and A.R.M were the architects and they came to us with a little scale of what they wanted and a plan but no other details and we had to make four and it had hundreds of little lights on it and the colour had to match all the timber-work in the room which was being made in Tasmania and shipped out here. We also had a set budget and a really tight time frame. Other things that were involved in the project were we built a prototype which we hung up in the workshop and we did a lighting test, noise testing and acoustic testing. the stain of the plywood that we used i think we used 22 samples until they chose the exact right colour and this being 22 of the same colour with just a slight variation so we had to get it just right.

Q. What was it like working with Tim Burton?

A. Ha, ha, he walked in, hung around for 15 minutes and then left – we never saw him again!