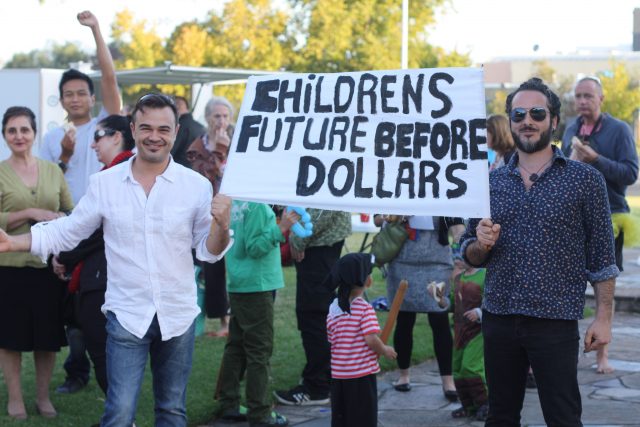 When Hobson’s Bay Council decided to outsource two of their children’s centres, a rally of over 200 people, including pint-size comic-book heroes, took over council chambers en mass. From the outside, it’s not difficult to recognise a feisty minority of protestors bound by circumstances outside their control, but inside chambers the disparity seemed clear between those who voiced their ideals and those who listened.

Jane Kerslake, Women’s Officer at Australia Services Union explained, “Bayside Council decided to outsource their Children’s Services in 2013 and despite community efforts to ensure services survived, it’s been recently confirmed [they] would be closed.”

More recently, parents in Bendigo were devastated when Bendigo Council justified the closure of the Bendigo Early Learning Centre because several other private and non-for-profit services matched the quality of council childcare. Another wave in childcare culling is Burnie City Council in Tasmania who recently announced they too ‘will be seeking expressions of interest from private providers.

Council-run childcares are reputed to provide a higher standard and quality of service, with staff reportedly earning above industry award rates as per the pay equity win in 2003.

This illustrates that staff retention, job satisfaction, team comradery and processes are, and aspire to excellence when adhering to strict government codes. Where there is accountability, there is peace of mind. Parents who use the Hobson’s Bay facilities believe too that care is superior because of staff – a major factor, which soothes the many tensions surrounding a parent’s, particularly a mother’s, choice to return to work.

Since the decision to outsource, the general feeling amongst staff at ANCC & AMCC is that the introduction of new management would definitely be the end of an era. For some it will be the catalyst for change, meaning the break-up of dynamics within teams that currently work to instil consistency in the communities most vulnerable – its youngest, smallest people.

Continuing, Jane Kerslake said, “If Council really cared about outcomes for kids and their community they wouldn’t outsource these services, they would expand their role. Local Government can offer a stable workforce and continuity of care unmatched by other providers, where turnover is reported at 18 percent.”

However, Mayor Cr Colleen Gates stated “That the introduction of the National Quality Framework will ensure a standard of service is delivered across all the 20 centres in Hobson’s Bay.” This guarantee suggests for parents that care would not be compromised.

Parents disagree. They’ve fought alongside Australia Services Union for eighteen months to highlight how integral it is to the well-being of future generations to retain the centres in-house. Over 2680 signatures were collected on petitions, several meetings were held with the Mayor, issues raised, rallies organised, complaints laid, reviews undertaken and still the community went unheard. Not even those super-cute heroes could sway the councillors to vote for the kids to come.  A concerned parent on the SAVE HBCC Facebook page commented, “Our councillors have not voted with compassion and conscience for the children, the families and the community.”

Granted, when “the rates bucket is not a bottomless pit” and it costs approximately $1 million to subsidise two childcare centres, the fiscal responsibility of councils to the wider community is paramount. Across all centres within Hobson’s Bay, the two in question ‘represent only 8 percent of the total education and care places,’ with some councillors believing ‘ratepayers shouldn’t be expected to pay for facilities they don’t otherwise use.’

Kate Doherty, an active spokesperson for parents, said “All rate payers pay for services they do not personally utilise.”

It is Hobson’s Bay Council’s mission to create a healthy, connected, sustainable future – as their annual budget report states. As such, parents aim to remind them of their values and pressure council to rescind their decision as Blacktown Council did in New South Wales. Further, parents feel that with a projected $8 million surplus, Local Government can afford to profit from tomorrow’s children, who, it turns out, still believe in superheroes.

Kyla-Jayne Rajah is a freelance writer and regular contributor to community papers in West Melbourne.