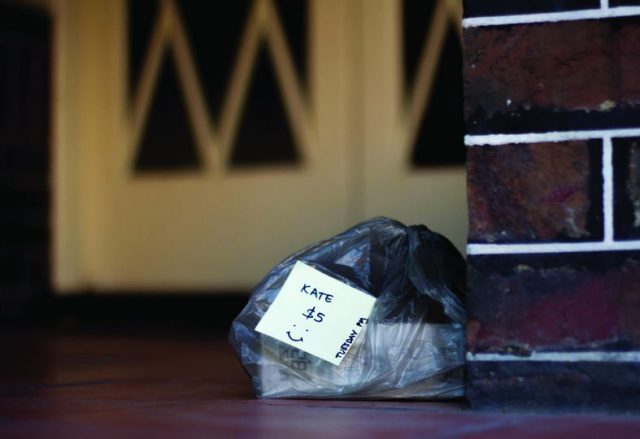 The inner west has only been home to me for four years. When I told my inner Eastern suburban pals that we were moving to the west, they had great concern for me: “But you don’t do drugs? How are you going to get to work in the City? We will never see each other – Yarraville is hours away from Richmond, I will have to catch a V-Line.” And so on.

It was weird only knowing a handful of people in this new pocket of Melbourne we had barely visited before we bought our house. We renovated our shack, got knocked up, had a baby boy, then started sorting through the mountains of stuff that we had held onto for years, not knowing what to do with it all.

A friend told me about Inner West Buy Swap Sell on Facebook. She explained that it was like eBay for the inner west, except you don’t have to use Australia Post: ‘People just buy your stuff and then they come to your house, pick it up and shove money under ya mat.’

I was nervous. I didn’t want strangers coming to my house to pick up an old copy of a Billy Idol record. But I gave it a go and soon I was making some dough and meeting people at the same time.

Then it got busy, real busy. People were posting things like ‘NIL’ or ‘Following’ or ‘bump’ or just an ‘f’ or a ‘.’ on my posts. I had no idea what all of this was about. I consulted my buddy, who explained all the terms and conditions to me (NIL = Next in Line, Following = to follow a post, Bump + bring up my post to make it more prominent – but only after 3 days, f and . = a lazy ‘follow’). I had only just realised what ‘WTF’ stood for (I thought it meant ‘Want To Friend’), so I was pumped to learn of this new vocab.

Then I started to get lazy. I would leave items for collection next to my front door and just ask people to leave money under the mat. I didn’t stick my head out to say hi, I just sat on my couch while my dog barked. Once I heard the gate shut I would sneak out and lift the mat to find money underneath.

So what is so special about this online community?

Established in early 2011, the group has grown from a bunch of school mums at Kingsville Primary School who wanted to shop locally, to a widespread mass of over 15,000 peeps wanting to buy, swap and sell their goodies.

From inflatable husbands, knee high Laboutin boots left by an ex-girlfriend, to questions about what colour to dye your hair, what to eat for dinner, right down to match making roosters to help out a broody hen (don’t worry, it ended well), it doesn’t look like the group is slowing down.

Inner West Buy, Swap, Sell (or IWBSS as it is fondly known) group administrator Caroline Trewenack told me there are huge plans for the group.

“The online group brings a sense of connection to the wider community; a feeling of inclusion and a way to get to know your neighbours. It has certainly broken down a lot of barriers.

“Many members have been able to supplement their household income through selling items that were too good to throw out, or too much effort to put on sites such as eBay or Gumtree.

“You could even say that many an inner west household has been decluttered. Though it could be argued that a house is just as quickly filled up with other IWBSS purchases over time!”

On top of the community spirit, the group has been the core nucleus in raising much needed funds for a variety of important charities, including $7000 which was raised for a dog called Alfie who had been stolen from his home, only to find his own way back disturbingly mistreated and harmed. The funds paid for Alfie’s vet bills and his owner’s call out for help highlighted the very frightening issue of dognapping in the inner west.

A huge $15,000 was raised by IWBSS for a local father stricken by a rare form of cancer. A campaign titled #auctiontohelp saw people auctioning off their skills as bookkeepers, jam makers, bakers, personal trainers, social media gurus and web designers to raise funds for Claudio and his family.

Then there are the group offshoots where members have found a common interest through online discussion from the topics of watching films, reading books, making jam, cakes, and singing. The all-important West Welcome Wagon group sprang into action through IWBSS, which sees members donate furniture, clothing and goods for the inner west’s newest residents; choirs have been started, book groups take place fortnightly and crafty people catch up regularly for stitch and bitch sessions.

And let’s not forget the amount of cats, dogs, turtles, wetsuits, stuffed toys, keys and wallets which have been returned to their rightful owners just from one simple post.

I was dying to ask Caroline about the coolest item she has ever seen on IWBSS: “Everyone’s definition of cool varies – that’s why the site is so popular, there’s something for everyone. It’s random, you don’t realise that you need a one metre high orange chicken until you see it. And yes, I bought it.”

It seems like it is time for me to open my door again to the local community and let them put their coins straight into my sweaty palm. Forget the doormat, community is the new black. Lonely is so last year.

And the huge plans for the group? Join IWBSS on Facebook and watch this space (be careful, that space is very addictive).