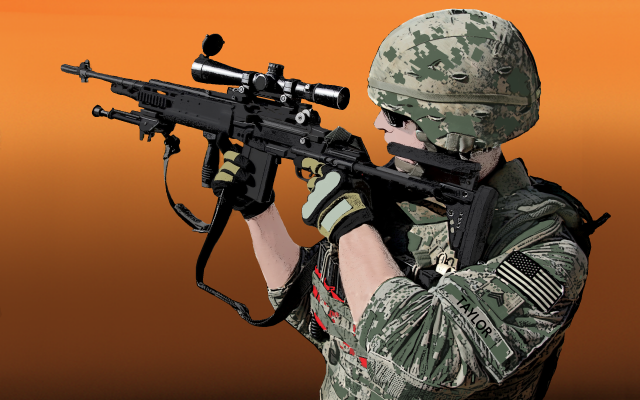 Killing in the name of – American Sniper

There has been a lot of talk about the recently released film American Sniper, directed and produced by Oscar-winning director Clint Eastwood. The film is among Eastwood’s biggest – it had a record breaking weekend at the box office upon release and was nominated for six Academy Awards, including best picture and best actor. This was, however, not achieved without ruffling some feathers – the film features scenes that are distressing for both audience and the film’s main protagonist, whilst stoking the fires of controversy. Discussion continues about the role of America as ‘World Police’ and the mechanisms Hollywood utilises to administer assumptions to comatose audiences about good and evil and right and wrong.

We asked some of our readers and fellow Westsiders what they thought of the film’s themes and posed this question: “Is it ever right to use violence to try and solve the world’s problems?

Jess Appleton “I don’t believe it is ever right to use violence to try and solve the world’s problems. I think it is wrong, why do most people think violence is the only answer. I believe it is because we are taught that at young age . There are more peaceful ways to solve problems without violence.”

Jennifer Manivong “I believe there is no wrong or right because we all have different experiences and views. It would depend on the situation though I reckon we should all try get along than solve problems with anger and hate especially with the war. It is a part of humanity to have these kind of emotions then again it is upon us to control them. We all have a protective natural instinct and when things do go wrong we instantly go to attack mode. Would not say it is a bad thing using violence while you are protecting yourself or for your loved ones for the right purposes but when it comes to being unreasonably violent it definitely is not the way to go. If only it were simple and we could all just get along! Then the world would be a better and safer place!”

Lelet Lumani “I believe that different circumstances call for different reactions to what is regarded as violence, if something can be settled without violence then great but if it can’t and its absolutely necessary to resort to violence then yes. Preferably I would choose a non-violent world but as I have already stated if it is unresolvable verbally and innocent people are being affected then my answer would again be, yes.”

Zachary Boicovitis “I don’t think it is right to use violence to solve the world’s problem because people that have nothing to do with it always seem to lose their lives for no reason – why can’t we have just a massive talk between countries that are facing war? We don’t have to involve violence, it’s really a shame that it comes to violence. Why haven’t we learnt from previous war’s, it doesn’t solve anything it just causes heartache and the countries are faced with such massive debt that they can never be the same again!”

Phuong To “Violence for world problems is not always the way to go. It might be one of the fastest ways but it generally has a negative effect. These consequence could take generations to fix or even last generations. For example, a country could take decades to rebuild or a generation of people could be traumatised through these acts. Hence, if possible, I believe that other slower methods may be a better option. For example, putting pressure on a country so it would ground to a halt through trade or politics. However, if the world problem is something immediate then sometimes violence would be needed.”

Naomi Abiera “Violence is just an excuse much of the time and I just wonder if American Sniper gives us a hero or more sinister propaganda. It’s a classic example of the brainwashing that the media does through war propaganda. The glorification of the US involvement in Iraq and the racist portrayal of Arabs is especially destructive due to it being disguised as a morally wrapped truth. The movie bombards us with images of Iraq and demonizes the Iraqi people by labelling them as ‘savages’ all the while portraying them as a cartoonish evil. The constant underlying black and white theme highlights the moral complications of war shown through the decisions to kill women and children in order to save fellow soldiers, all to support the ideology of the neo-conservative ‘War on Terror’. The entertainment industry has evolved into a dangerous platform which can inject subconscious thinking into the population because of the relaxed nature in which we view these movies and simply because we think it is “just entertainment”, however, I think this a clever way in which the media can put forward agendas. This movie in particular I feel was just a way to incite and reaffirm society’s hatred for Arabs and Muslims while smoothing over America’s thirst for war.”

Anonymous – “Try? Yes. Is it right? Depends on which country are that you wanted to be ‘right’. There is no excuse for killing people, or killing the people that kill people. It creates fear, chaos and a state of vengeance and is very effective in achieving objectives. We send brothers and sons to kill other people’s brothers and sons. How is it ever right?”

Grace Magill – “To efficiently solve problems there needs to be sufficient and rational thinking. It may seem as though I’m seeing through rose-coloured glasses, though violence may cause fear to solve the problems quickly for the time being, there may be a lot of problems and pain for the future and the generations ahead. The world’s problems will only be solved properly with compromise and maturity. I think there are a million ways to solve our world’s problems, violence being the very last.”

Edlira Vula-Cana – “A guide in using violence to solve problems, although violence is frowned upon in our modern day it is still an effective way to solve problems when you do not have any other way of solving it, but you gotta remember that if you seriously hurt orkill someone it is a big responsibility that you going to have all your life .”

ONCE UPON A TIME IN HOLLYWOOD

VIOLENCE AGAINST MEN, THE UNSPOKEN TRUTH