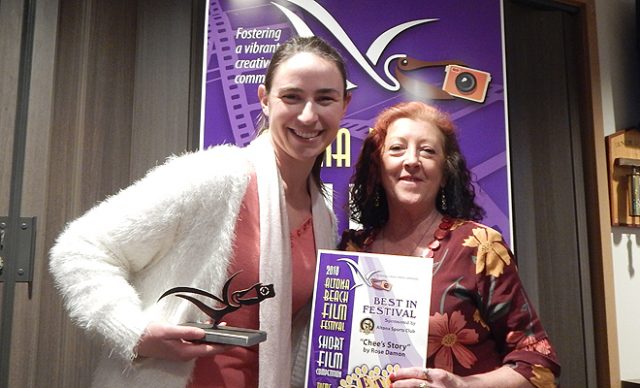 The annual gala event is the chance to view all the film competition entries and present awards.

The gala event, in its 5th year, will commence at 6.15pm in the Altona Theatre foyer. Guests arrive and will be greeted by the President, walked along the red carpet, have a quick photo taken by the paparazzi, have a glass of bubbles, have a few nibbles and be entertained by the magical sounds of the Footscray Gypsies performing live in the foyer.

At 6.45pm you will enter the theatre with popcorn and drink, get comfortable, ready for the film screening commencing at 7.00pm. The first 40 minutes will feature short films submitted by under 13 year old and under 21 year old
film makers.

At 7.40pm you will take a short intermission – time for patrons to go to the loo, grab another drink, stretch your legs and enjoy the enchanting live music of the Footscray Gypsies.

At 8.10pm it’s the final act; sit back and enjoy the short films submitted by the over 21 years old film makers.

Once all the films have been seen, the Master of Ceremonies will commence the Award Presentations. All films are judged by professional film makers, Wain Fimeri and Aaron Ellis. Awards will be given in the order of Best Pre-Teen, AlPel Trophy & $200.00, Best Young Adult, AlPel Trophy & $300.00, Special Recognition AlPel Trophy & $500.00, Best in Festival, AlPel Trophy & $1000.00. The AlPel Trophy is a unique and rare silhouette of an Altona Pelican with a camera in its beak, much sort after by film makers from around the world.

All film makers entering the short film competition receive a certificate of participation. The Altona Beach Film Festival will present a Presidents Encouragement Award $100.00 and the audience are involved by choosing their favourite film by clapping and cheering. The Master of Ceremony will determine which film has the biggest reaction and will therefor win the People’s Choice Award $100.00.

Leaving the theatre, guests have the opportunity to congratulate the film makers take a few selfies and depart with AlPel Awards, cash and smiles on their faces.