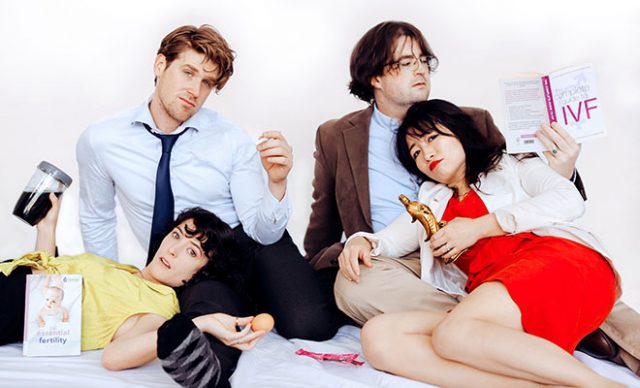 Independent theatre company Wit Incorporated is returning to the local stage this May with Every Second, a dark comedy by award-winning Australian playwright Vanessa Bates that takes on the theme of infertility and its impact on relationships.

“And how could there not be a baby? With all that love? There should have been a baby.”

The script was selected by Wit Incorporated Artistic Director Lansy Feng, who’s taking on the role of ‘Jen’ in this season. “As an actor, I’m really pleased to be telling this story, showcasing female voices and presenting something many people struggle with – becoming a parent. It’s a heartfelt story told in a hilarious way, which we think many people will relate to.”

It’s a theme likely to strike a chord with audiences. Infertility is an increasingly common challenge, affecting one in six couples in Australia; for LGBTIQ+ couples, the challenges associated with having a child may be all the greater. It’s an important and relevant topic explored in this script with empathy, intelligence and humour.

For Wit Incorporated, Every Second marks the first return to stage since February 2020, and is the first work produced by new leadership duo Lansy Feng and El Boydell. The work is part of Wit’s 2021 season of works by playwrights of colour, which will also feature a brand new original work by Lansy Feng in November. Says Lansy, “As a Taiwanese-Australian writer, it’s an honour to present another playwright of colour’s exceptional work as our first production since taking on leadership of Wit Incorporated.” The season also marks a first collaboration with Director Emma Drysdale, a British theatre artist making her Melbourne directorial debut in this new relationship with Wit Incorporated.

Every Second is being presented at Bluestone Church Arts Space Footscray, from 19-29 May. More information at witinc.com.au.

ENGAGING IN AUDIENCES IN ISOLATION

THAT TIME I SAW WIT INCORPORATED AT THE BLUESTONE CHURCH ARTSPACE

SEVEN REASONS WHY LOCAL THEATRE IS A GOOD IDEA