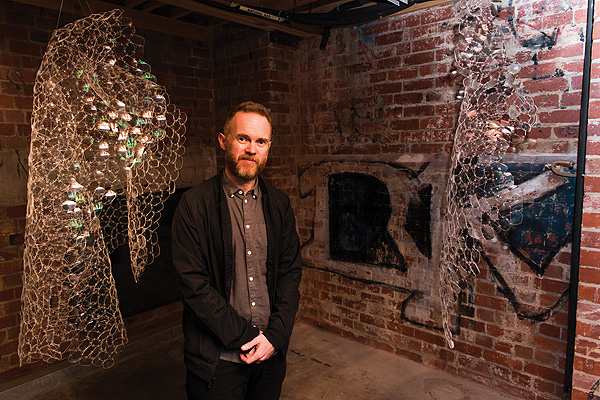 (Note: the story below appears in The Westsider #16, May 2016. Some historical facts have been questioned and a follow up story will appear shortly)

A Western, told through Contemporary Art

The Substation in Market St, Newport, was always about electricity. Still is.

In the first season of its 2016 programme, a compelling hum/drone/whine/grumble stole out of a back room of the downstairs gallery. Inside, a chaos of wires and arcane electrical and sound doodads were scattered across the floor. Two aerials resembling sideways Hills Hoists listened. Listened to this glorious building ease and creak and shift. They snatched the sound atoms out of the air and converted them to its song.

It did so by changing direct electrical current [DC] into the user-friendly alternating current [AC].

Substation director, Brad Spolding told The Westsider that, after all, was the original purpose of this giant. DC electricity hosed into its intestines by coal-fired turbo generators was converted to AC and poured out as power for Victoria’s shiny new electrical train system.

Today, one hundred years later, the electricity is supplied by human energy. 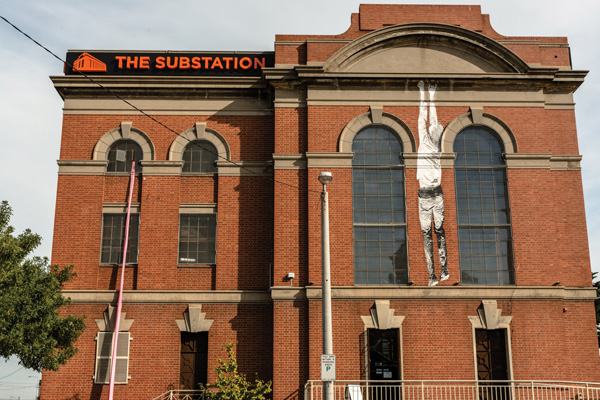 A glazier in his mid-twenties, Darren Williams came here in 1999 and saw beneath the decay, accumulated rubbish and vandalism of 25 years of abandonment, a contemporary arts centre that would reflect and serve this rapidly expanding community.

Its bones were stunning. While engineers had mapped out the technology needed to move Victorian commuters, its neo-classical skin [with art deco flourishes] was the responsibility of the Victorian Railways Way and Works Branch – craftsmen all.

As you approach this giant box of curiosities, its history is apparent. Well, apart from the elongated graf paste-up [is he going up, or climbing down?], the 50 feet of pink ribbon fluttering from an upstairs window and the teepee/tardis in the yard with its globules of saturated colour and carefully set out floor of broken branches.

This is multi-disciplined artistic expression responding to the challenges laid down by the limitless configurations of its internal spaces; this is a conversation with a presence 100 years old; this addresses what it means to live in the western suburbs.

‘The western suburbs are growing to be close to the size of Adelaide now. Many have this outdated idea that the West is some remote part of Melbourne. It’s not. We are a mere 20 minutes from Flinders St. We are inner-urban, we are gentrified and we are growing rapidly,’ said Brad.

‘The Substation is sharply focussed on contemporary arts practice in all its forms, but with a prejudice towards our local community.’

While Brad agrees that contemporary art can sometimes be ‘difficult’ to grasp, he sees part of his job to be a wayfinder and barracker for those unfamiliar with its many strands.

‘Much of what we do emerges from the local community, so there is an access point there. What happens after that is when things get interesting. By filtering these ideas through contemporary art, we are offering a different way of seeing ourselves.’ 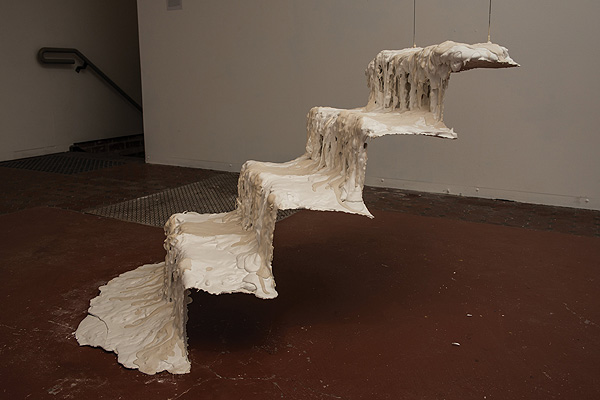 Because access is paramount, The Substation offers programmes that are usually free. The building also hosts community groups for awards nights, weddings are celebrated here, the Red Cross has used it as a blood collection site and even part of an episode of the television thriller, Jack Irish, was filmed in its main space.

‘We also have strong links with major Melbourne festivals, including Midsumma, the Melbourne Fringe and the Human Rights Arts and Film Festival. And our annual Contemporary Art Prize, appropriately sponsored by Metro Rail, attracts entries from across Australia.’

Not bad for an organisation that boasts only two and a half employees.

Brad Spolding, a producer/director who has been working with artists for more than 15 years, spruiks The Substation with the fervour of a devotee.

‘We want to make it something our community can be proud of…and the rest of Melbourne a little envious of,’ he smiles.

Season two at The Substation begins on 13 May. Go to thesubstation.org.au for more information.

CHANCE TO HELP GUIDE THE SUBSTATION