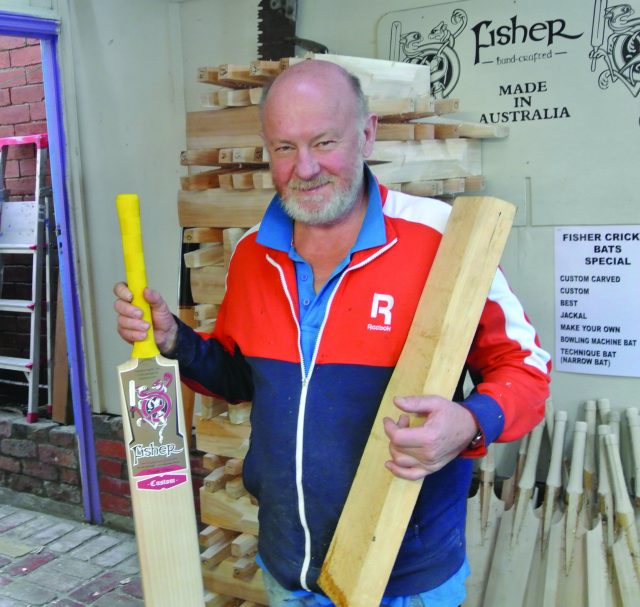 As you hurtle down busy Williamstown Road, bear in mind what happens in stories – real heroes go unrecognised.  Along the section where Kingsville borders Seddon, you’ll pass a diminutive, somewhat quaint building.  Fisher Cricket Bats & Willow is hard to miss: an entire wall is laced with a colourful mural of a cricket match.

Cricketers still head west for a customised bat, a slab of willow capable of sending balls over the boundary and into the stands for six.  Turns out, Seddon is a wonderland for authentic Australian cricket bats, – it’s been that way for almost a century.  And veteran bat maker Lachlan Fisher is still at the crease.

Lachlan comes from a farming background – he couldn’t hide it if he wanted to.  The amiable, straight-talking, lightly bearded 60 year-old has a farmer’s demeanour.  True to form, Lachlan engineered all his own machining equipment. 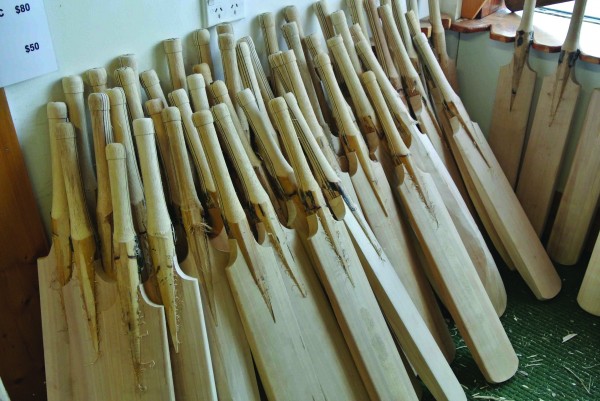 The word is out

A new batch of English willow, a top cricket bats’ active ingredient, has just arrived and Lachlan anticipates a day of phone calls. I’ve been in the shop for just five minutes, a lean-to built onto the front of a cottage, taking in the natural woody aroma left by raw timber, when the phone rings.  Then, I get a crash course in bat making.  “I’ll have one ready next week,” Lachlan tells a customer..  “I’ve got a block selected.  I’ll make the bat up around two, seven and a half, with a lot of meat on it.  It’s a beauty … this year’s batch is very, very good.”

Hearing Lachlan talk about bat making is like listening to a winemaker muse on grapes.  The use of English willow is paramount.  “No other willow comes close,” says Lachlan. The grain matters, but other considerations, such as ageing of the cut timber, come into the equation. I confess, the subtleties are beyond me, but Lachlan, who’s been making bats for over three decades, can tell if a cleft of sawn wood will perform, or end up relegated as a “dud”.

Lachlan won’t confirm it, he’s genuinely disinterested in hype, but there’s no end to rumours of big-name international cricketers walking to the crease with a Fisher. Cricket historian, and considered by peers as the world’s pre-eminent cricket writer, Gideon Haigh, is a Fisher bat fan. He refers to Lachlan as “a prince among men” in the 2012 Bradman Oration. Gideon is one of many to write about Australian cricket bats, a story that propels Seddon into cricketing history.

A Pom and an Aussie yarn at the MCG

The tale started in 1902, on a sweltering day during a Test match at the Melbourne Cricket Ground.  The English captain sat on the ground alongside Australian umpire Bob Crockett.  A wicket had fallen, and they waited in the sun for a new batsmen to meander to the crease.  The Englishman wondered aloud why native bat willow was not grown in Australia.  “Why not send some cuttings,” said Crockett in reply – more out of politeness than anything else.  Six months later, a parcel of six metal tubes containing cuttings of English willow arrived.

Crockett rushed to Shepherds Flat, Daylesford where his horticulturalist brother lived.  It was here the sole surviving bud – in its “final stages of exhaustion” – was grafted onto a local willow.  In time, a five thousand-strong plantation of cricket-bat willow was established and along with it, R. M. Crockett & Son, manufacturers of genuine Australian cricket bats.  Their bat making factory was located in Seddon. 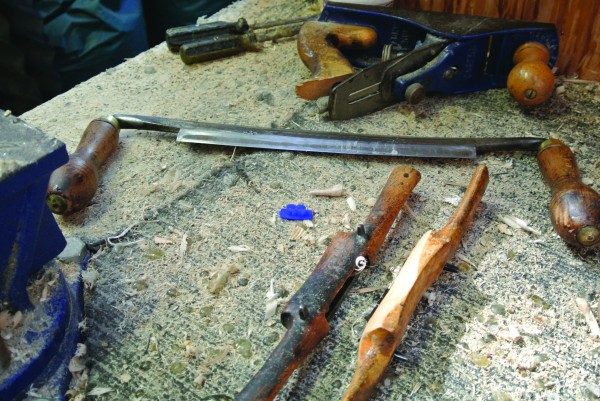 A ruin with a view

Lachlan looks at me askance: “You didn’t know about the factory in Charles Street?”.  Crockett & Son manufactured five thousand bats each year until the company’s sale to Slazenger in 1956.  The Daylesford plantation, felled by Slazenger chain saws, was eventually acquired by the sympathetic Tinnetti family who grow Australian willow to this day.  Now standing in the place of the original Crockett & Son’s Seddon factory are modern townhouses boasting ‘city views’.  Most likely, the location’s significance will eventually fade altogether.

Lachlan was in his late thirties when he was making bats for Maddocks Sports. He owned a Seddon property.  One day he turned to his wife: “Jo, I’ll build the machinery.  Why don’t we buy a small amount of willow from England … let’s have a crack at the cricket bat business.”  The Tinnettis in Shepherds Flat helped with use of their equipment.  “I had a workshop in Pilgrim Street.  People would walk down to this bizarre little place with a work bench and blocks of wood … They’d say to me, ‘I need it tomorrow’, so I’d jump in my Hi-ace, drive to Daylesford, sand it down and bind it.  I’d bring it back at midnight to be picked up the next day.”

Around this time, Lachlan traveled to England on a Churchill Scholarship to finesse his craft.  He also dreamed of a reliable supply of Australian-grown cricket willow and began planting trees throughout country Victoria.

Lachlan and his wife bought the Williamstown Road property in ’96.

Lachlan is still dependent on English-grown willow, “at great expense”,  But much else has changed.  Lachlan’s wife passed away two years ago.  He’s not as busy as when he was “flyin’” –  making 30 bats a week.  Lachlan now provides bats to a cricket-hungry, sub-continent local community: his afternoon will be taken up finishing four bats for a Sri Lankan customer. 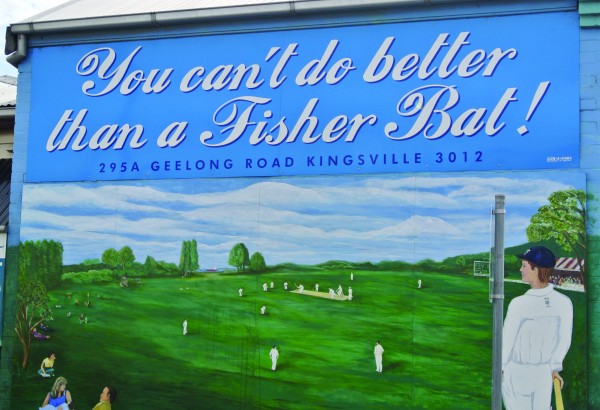 But, the secret to a high performance bat is the same as it always was.  No, it’s not the grain – “spring is everything,” says Lachlan.  To demonstrate, he holds a Fisher bat under his arm and drops a shiny red cricket ball onto the flat section.  The ball bounces off the blade with a resounding clear knock, almost a ping.   Lachlan looks at me.  “It’s a gun.”