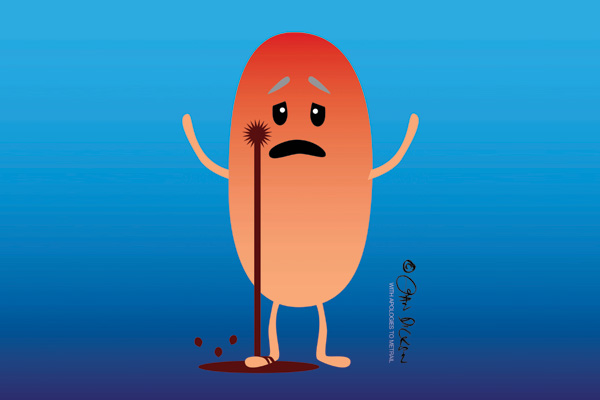 I blame Belty. Had he not arrived to collect his ‘two-and-a-half-k’, outstanding from our sudden new kitchen, the idea of a cork tile floor would never have come up. And had Jan not fallen for the shock absorbent properties of the bark of the cork oak, its inherent warmth to the barefooted, and Belty’s superhuman capacity to get it ‘up and running’ for his leitmotif of ‘two-and-a-half-k’, I wouldn’t be in a train pulling into Flinders St Station, nursing a face full of ache.

To get the correct ‘smick’ finish, two coatings of vile chemistry must be spread evenly across said floor of cork, according to Belty. However, this can only be done once vulnerable occupants and their fragile respiratory systems, escape through a 48-hour window.

Jan saw this as an ideal opportunity to take Mayhem and Meander on an overdue visit to their grandparents, her parents, my in-laws. To say that we don’t get on, rides the same bus that describes Kim Jong-un and Barack Obama as unlikely companions.

So off they went, leaving me to find my own way. And find my own way I did. Straight into the arms of my old mate, Reginald Briar-Hatchtooth, long a scion of the impenetrable back alleys that lie somewhere between Nelson Place and the Williamstown railway station.

Reg is burdened by rampant wealth [inherited], and wealth brings choice in all manner of disciplines. A particular favourite is a companionable romp through his wine collection [just a red, thanks]– so vast that it enjoys the very real possibility of being able to be seen from the moon.

When undertaking a bombing sortie on your liver, to deploy ordnance that comes from that shelf few of us can reach, from behind labels spoken of in hushed tones, brings with it a privileged consequence. Somewhere on the outer reaches of Massive Intoxication, your hangover is jettisoned like excess baggage and up you bob the next day in rude good humour.

And that is how I found myself, slightly dishevelled, slightly late, but completely sanguine on the commuter run from Willie to Collins St, and my daily joust with people in suits and numbers in columns.

At North Willie, I see a poster warning me not to offer my body to a hail of bullets. The graf is better in Newport, but trumping it, a poster exhorts me not to die by allowing a snake to nibble on my left eye. That would be dumb. At Spotswood, I am urged not to jam a fork into a toaster, and at Yarraville, strongly counselled not to set my head on fire. All good advice.

At Seddon, I watch Princess Arwen waft on board, hands, wrists and neck inked with runes, Celtic knots, elemental fuss and something wiccan. Her dress, a wild concoction of animal prints and jungle flowers, reaches the floor. Her hair is puce.

The nail [also puce] on the middle finger of her left hand is decorated with a swollen clot of deep crimson resin, for added emphasis, I suspect, when flipping the bird. She is absorbed by a fat hard-backed book, innocent of the precarious droplet of snotlet hanging from her nose ring.

The young man next to her is conventional to the point of anonymity, and the sword in the suit diagonally opposite becomes a perpetual glancing machine.

We drift in and out of Footscray, chastened by the postered warning that selling one’s vital organs might not contribute much to longevity, and in and out of South Ken ducking beneath the shadow of the Redeemed Christian Church of God and its modest slab concrete surrounds jammed between two accumulators of mammon. Why do commuters only ever get on at South Ken, never off. What do they know?

The poster at North Melbourne alerts us to the unlikely scenario of feeding one’s head to a bear.

Princess Arwen turns to the young ghost next to her, interrupting his ruminations over a slim paperback that is clearly Literature and Worthy, and asks: ‘Does this train go to Southern Cross?’

‘It does,’ he stammers, while what’s visible of his emaciated body flushes red in sequence from the tip of his precisely shaved head, down thin arms protruding from white tee [World Tour!] and out through pasty leg sticks into a decisive pair of unsocked brown brogues.

The Princess smiles, gurgle-sniffs and drops her book at my feet. Some preternatural tic insists we three all reach for the tome simultaneously. Anonymous simply mistimes his act of chivalry and falls into the aisle. Princess Arwen reels back to give me room and catches the right side of my face with her left hand. The raised resin globule on her fingernail carves its way down through cheek skin, cheek gristle, to cheekbone and, like all good head wounds, it gushes freely.

As we slide into Flinders St Station, I fruitlessly scan the cluttered platforms for the poster that would have warned me of this.