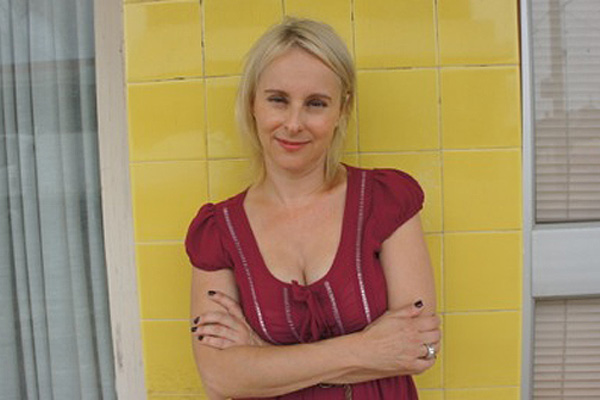 Introducing Anna Bourozikas, founder of the Setting Sun Short Film Festival to be held at The Sun Theatre and Kindred Studios 16-19 April 2015.

Tell us a little bit about you.

Well, I wasn’t sure how to answer this so I asked my 9 year old daughter: “well mum, you like kittens, you like filming and taking photos. You have two different coloured eyes. You make great cookies and your favourite colour is green.”

How long have you lived in the west?

My husband and I bought our first home, a little post-war house in Sunshine 14 years ago. We were newly-weds and expecting our first child. We moved from Elwood. We were part of that exodus of Gen-Xers who got priced out of buying a house from the other side of town and ended up here. We haven’t looked back.

What do you love about living in the west?

So much to love: great community, food, op shops, friendly people, diversity of people and cultures, and a buzzing, vibrant art scene. The Devonshire tea room in Sunshine offers the best Devonshire tea in the west at a great price. I like the feeling in the west that there is room for great ideas, for new ventures and meeting so many people doing their thing. There is a lot of opportunity here.

Where is your favourite place to get coffee?

Home. In bed. First thing in the morning, brought to me by my favourite baristas, my husband or son.

Where did the idea for the Setting Sun Short Film Festival come from?

It came from being a screen-writing student and fan of film festivals on the other side of the bridge, and noticing that over here, while there were lots of film-makers, and a film school there was no comparable film-makers’ festival. Also, I judged in the ATOM awards for several years and have being involved in film production and all that made me more aware of a need.

How long have you been doing it? How has it evolved?

I started working on it at the beginning of 2013. Thirteen months later we put on the first festival. I’ve started my third year. I had been working part-time as a proofreader, editor, and desktop publisher through my business Poppy Kat Media. I was re-establishing my working life after being home with small kids and finishing study. So I was looking for something I could do that used my skills and could expand my business. My background is in media. I have a lot of contacts that could help with various aspects of the festival along the way. It seemed a natural thing to try to do.

It took a few months to research and establish the festival framework, vision and find funding. The Sun Theatre in Yarraville were enthusiastic, generous and supportive right from the beginning.

The Seddon Community Bank gave me a $5000 grant to set it up. It paid for the website, posters, trailer and other production costs. They also gave me lots of useful business advice and were always supportive in helping me arrange the festival.

The festival’s creative partner, Amalthea Motions, was also on board early. We work closely, on the visuals, trailers, posters and logo. I’m particular about how the festival visuals look.

For a long time it was just the three of us. Once the call for entries went out, more people came on board, like the Maribyrnong City Council and Open Channel. Lots of people contributed prizes. This year Kindred Studios and Victoria University have come on board donating space and skills and I now share an office at Big West Festival. Ultimately though, it is a one woman operation with contribution from lots of different people and organisations along the way.

What is your greatest achievement to date?

The opening night of the first festival was pretty amazing. I remember standing on the stage in front of everyone, slightly shocked that it had come to being, that it was well received. It was a very scary year, a real leap of faith.

What’s coming up for you and the festival?

Gosh. I can’t think beyond the next few weeks and producing the next festival. We have a bigger range of films from the west in all categories. It will be a good festival. Then I need to get my students through their first semester at TAFE. After that, I have a few web doco ideas to explore before beginning SSSFF 2016.

Women of the West is a not for profit organisation providing safe, supportive events for women to create, inspire and share. Here we will share stories of some of the fabulous women in our midst.  If you wish to celebrate with more fabulous women of the west, please ‘like’ our Facebook page and come along to our next event: facebook.com/womenofthewest or emailwomenofthewest@hotmail.com