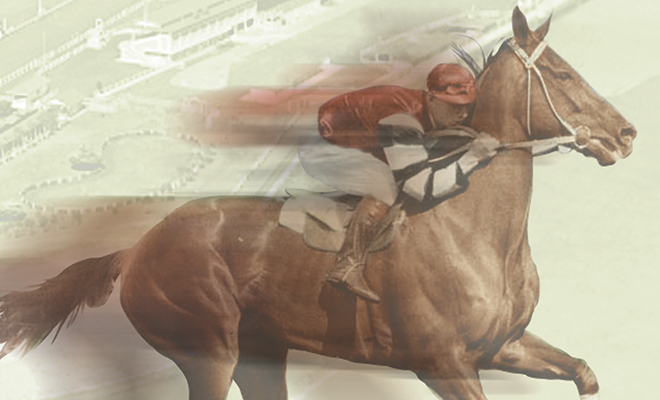 Tanks and chimneys of the nearby industrial precinct cast a gritty shadow over Altona Coastal Park. This space, now covered in low coastal scrub, was once Williamstown Racecourse.

But strolling around the barren seaside reserve, I’m struggling to picture a major sporting venue here … crowds jostling on manicured lawns to catch a glimpse of the cherished national champion.

Rewind to the 1930s. The Great Depression is making a pauper out of one too many Australians. Stands to reason the nation becomes captivated in the exploits of a hero, however unlikely — one red chestnut gelding with face warts, all of 17 hands tall.

Phar Lap dominated on racetracks throughout Australia. And after taking a much-needed spell, he returned for a tilt at the upcoming spring season. No-one would question the champion’s stamina, but could he win after a five month break from racing?

Phar Lap’s trainer had his doubts.

The thoroughbred was back from the lush, rolling hills of Bacchus Marsh revitalised — but obviously much heavier. A decision was made to also enter another horse, Rondalina in the Underwood Stakes to be run at Williamstown Racecourse, located down the road from the historic seaport town.

Local racing had certainly come along way from the time when hunting and horse racing were natural pastimes of rich pastoralists.

In the early days of colonial settlement, a young thoroughbred of good breeding named Flying Buck was stabled at Williamstown and trained at the beach.

Thirty thousand spectators turned out at Flemington in 1859 to see Flying Buck take out the first Champion Stakes, a win firmly placing Victorian racing and the seaport town on the Australian colonies’ racing map.

The Williamstown Racing Club sprang from a keen, local racing community. An original racecourse on the outskirts of town moved to its longstanding Wyndham location in the 1860s, and the club forged ahead with strident improvements.

Early in the new century, punters in thousands now crowded into railway carriages at Melbourne and headed for Altona. Trains stopped at a siding near the track where racegoers embarked, strolling to the course to be met by gravelled paths, spacious lawns, trimmed hedges and colourful, fragrant flowerbeds.

Visitors making the trip west were often surprised to find an ‘oasis’ in the marshy coastal backwoods. The coastal course grew into a premier racing venue and training facility, the likes of Caulfield.

Unbelievably, on the day of Phar Lap’s run at Williamstown Racecourse, the champion was not the sole attraction. The revolutionary automatic totalisator, forerunner of the TAB, had been installed and would be operating for the first time at the track.

The giant calculator made up of piano strings, pulleys and cast-iron boxes could automatically tally odds, enabling bets to be made safely, free from bookmakers’ shenanigans.

Punters dealt with operators behind glass windows in a building that housed the Australian-made mechanical wizardry. It may have been a more efficient way to do your dough, but it was a social game-changer: the totalisator allowed women to bet legally for the first time. There was one matter still to be resolved … whether Phar Lap would prevail.

On that gusty Tuesday in August 1931, as fans gripped the white railings, they saw their two-to-one favourite lag behind early on in the one-mile race. Just when it seemed like they’d trudge home empty-handed:

‘… Phar Lap forged ahead entering the straight, and beat Rondalina by a length and three quarters.’ (Singleton Argus)

Phar Lap went on to assemble a string of wins in a year that he seemed unbeatable.

Australians everywhere were doing it tough. Grabbing that scarce job, scratching together enough money to put food on the table — anything was possible after hearing news of yet another gutsy Phar Lap finish.

Fate was not kind to the racing champion, nor Williamstown Racecourse. Phar Lap died mysteriously in America only eight months after the local run.

Less than a decade on, World War Two was declared, and the army took control of Williamstown Racecourse for military training. Williamstown Racing Club fully intended to resume events after the war, but an unlikely fire destroyed two grandstands before the venue could be restored to prime condition. Plans were now in ruins.

Never again would the roar of punters cheering on a ‘good thing’ be heard at the local track. Eye candy exhibitions in museums ‘round the country keep the memory of Phar Lap alive. If only the same could be said of the iconic racing venue.

Fortunately, local Tom Ferris has chronicled the history in ‘Williamstown — A Great Metropolitan Racing Club’. For aside from fading memories, little else remains of the historic track — bar concrete rubble and a lone
palm tree in a windswept landscape.

MEASURING THE SIGNIFICANCE OF A MUCH-LOVED TREE