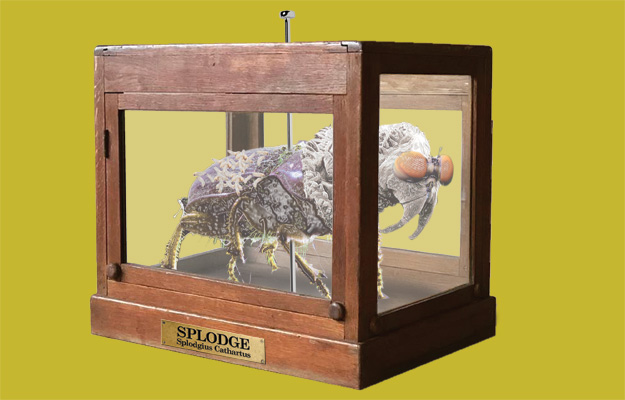 Our story starts at the most putrid rubbish dump in the world – a disgusting stinking pile of refuse in an infested sewerage swamp.

Incredibly there is a single soul that lives here.

A nameless orphan, flushed down the toilet as an infant, raised by the rats and vermin of the garbage tip.

Living in filth, this cursed individual etches a miserable existence in the mess. Only just surviving from day to day.

But our story is not about this wretched character.

You see, living off the foetid waste of humankind, this nameless soul had its own decaying trash heap. The vile discarded waste that begot waste.

Over decades, a pile of repulsive rotting filth, composting, decaying, bubbling, fermenting. Starting to gently quiver at first, but then uncontrollable spasms.

Then… The Splodge is born.

Not human nor animal or rubbish, but a grotesque abnormal chemical reaction.

Spawned from the filthiest muck on the planet. Like an ant’s nest, it consisted of many toxic organisms working together to create the whole.

It would be foolish to submit a description of the disgustingly acrid and nauseating odour; hence you the reader, may depart the story here.

As it moved around the festering rubbish like a slug, it made a horrid sound. A cross between dry retching and a diarrhea bowel movement. Then, an intrepid fossicker, who roams the rubbish tips for treasurers stumbled across The Splodge.

He bundled The Splodge into a box and took it home.

First there were the complaining neighbours of the revolting stench.

Then came the media. It made headlines. Then the Government officials.

The Splodge was taken off by ‘specialists’ from ‘The Department’.

Hindus and Buddhists proclaimed it to be proof of reincarnation.

Waste disposal specialists suggested it be sent to China.

The Army wanted to test it in the field.

The Church of Scientology claimed it to be The Messiah.

Activists wanted The Splodge to be recognised as a citizen and have the right to vote. Then the protests.

‘Free The Splodge!’ chanted the demonstrators. The Government succumbed to public outcries.

Once released, The Splodge started to reproduce. But not in a way other organisms do.

A creepy androgynous hermaphroditic performance that if explained here, would be immediately censored.

Soon there were dozens, then hundreds, then thousands of Splodges roaming the land.

Then the outbreak began.

Everything a Splodge touched immediately became diseased and infected.

Doctors could do little. The miserable victims would have a quick yet agonising death.

And all this time the Splodges continued to feed from the most putrid of human rubbish and waste.

The Splodges needed people to create rubbish to survive.

Slowly at first, but then the plague reached all corners of the earth and humans died in their thousands. Soon, the entire human race was wiped out.

With no people, there was no rubbish being produced.

The Splodges were in a terrible predicament, their supply of rancid nourishment was depleting rapidly.

When the rubbish ran out the Splodges started to wither, melt, thaw and liquefy into pools of revolting slush.

No people – no waste – no Splodges.

So, remember my good friend…

The next time you throw away that rotting apple core… The Splodge!