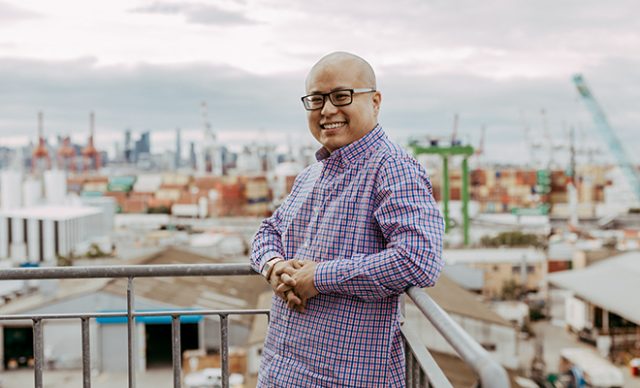 I was once part of the ‘ethnic majority’, so I’ve been both sides of the coin. My name is Ng Kheng Hong. Ng is my family name, Kheng Hong is my name. It’s a Chinese name, of Hokkien dialect. My grandparents (both sides) fled Japanese persecution in China during the war, and landed in South-East Asia, in Malaysia. My parents, left Malaysia for Singapore for a better life. The Chinese diaspora in Malaysia and Singapore is one of the largest in the world. East Asian nameology means family name (or last name according to Western standards), comes first. It’s on my Singapore birth certificate.

I was baptised at the age of three, and given the name John. Folks didn’t want to add that to my legal name, so informally I was known as John, but in legal papers I used Ng Kheng Hong for 24 years. No issues. The Chinese diaspora forms the majority of the ethnic population, and the name is easy to pronounce. Moving to Australia in 2004 at 25, I am now Kheng Hong Ng. Ng is now the last part of my name (family name), as I have to adhere to common standards.

It took me over a year to wrap my head around the western naming convention. Also, (most) western nameology have a middle name, so they immediately assumed Hong is my middle name.

My bank, and all official records in Australia, took the liberty to butcher my name, and I am legally known here as Kheng Ng. I remember the first time I was prompted to insert my name on a form, and I wrote Ng Kheng Hong, and thought nothing of it. A few days later, a letter arrived, addressing it to a ‘Mr Hong’. #facepalm

People then ask how to pronounce my name, particularly my last name (or family name). Some even struggle with Kheng Hong. Seriously there are vowels in there, just pronounce it phonetically. Ng, is a challenge for everyone, unless one has been to Singapore, Malaysia or Hong Kong, or had friends with the same name. I could digress and mention people even ask why I’m using a fake name like John, or if I’m Vietnamese (Ng looks like Nguyen, pronounced nothing like Ng).

I go around Melbourne being called John N-G, as in, the last name is spelt out. (“Hi, Mr En-Gee!”) I get really frustrated, sometimes even angry. However, I find attempts to help people pronounce it always help.
A Mohammad Tariq wouldn’t like be called Mohammad T-A-R-I-Q, and similarly, Inji Esat wouldn’t like to be known as Inji E-S-A-T. Going deeper into this, and digressing, I’d even say the first steps to ending subtle racism is to take the time to pronounce a name, and understand all names have a beautiful cultural meaning. Kheng Hong, in my Chinese dialect, is ‘to celebrate greatness’.

Butchering it, and twisting it to fit your common tongue, is a sure-fire way to ensure you can deny racism doesn’t exist. Has anyone mispronounced your name? Did you have to change your name, to fit into the Western culture?

My name is Ng Kheng Hong.
What’s yours?

Ng Kheng Hong is creator of Humans of SKY and the Inner West.