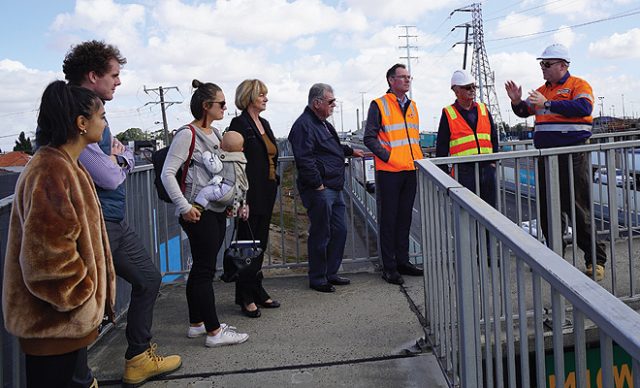 Are you interested in knowing how things are progressing on one of the biggest construction projects in Melbourne’s west?

Then you should put your hand up to join the West Gate Tunnel Project Community Liaison Group (CLG) to get the latest information on this massive project.

The West Gate Tunnel Project team is keen to understand how things are tracking in the eyes of the community and for members to be involved in community engagement activities relating to the project. CLG members also get to hear directly from the project construction team about what’s happening and what’s coming up during construction by attending meetings every two months.

Earlier this month, members of the West Gate Tunnel Project CLG went on a behind-the-scenes guided tour of the works underway near the West Gate Freeway.

The CLG were given an overview of the monopole installations and the complexity involved in the work by the specialist project engineer.

Kevin is an active member of the West Gate Tunnel Project CLG West, which he joined in June 2018. He’s lived in Seabrook for over 15 years and is also a volunteer with a local school and at Werribee Hospital.

“We were shown around by Glenn, one of the project engineers, who explained the works to us in lay terms and we got the chance to ask him questions.

“Glenn told us about how the existing lattice towers are being removed and how they re-string the new monopoles.

“The CLGs are a great avenue for two way communication between the project and community members.”

The CLG members were also given an insight into the level of community engagement that was required for this type of work. Engagement with the local school and provision of dedicated buses for children and community due to temporary bridge closures.

The West Gate Tunnel Project will give Melbourne a much needed alternative to the West Gate Bridge. It’s widening the West Gate Freeway from 8 to 12 through lanes, and building new twin road tunnels and an elevated motorway to connect the west to the city and Port.

The project has two Community Liaison Groups covering the western and northern geographic areas of the project. Their alternating monthly meetings are hosted by an independent chair from the community.

The project is inviting expressions of interest from people who are interested in the development of one of the largest road projects underway in Melbourne and are willing to commit to and attend regular meetings. They’ll need to have strong and diverse links to their community and live in suburbs which may include Point Cook, Altona, Altona North, Brooklyn, South Kingsville, Spotswood, Footscray, Docklands, North and West Melbourne.

For more information visit westgatetunnelproject.vic.gov.au/clg. For information on the West Gate Tunnel Project, you can call 1800 105 105.