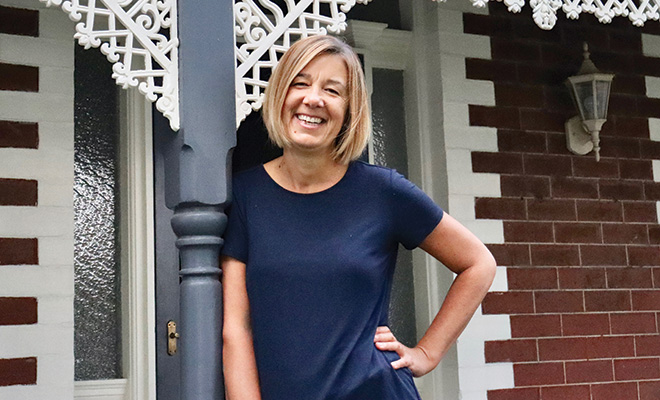 Suzanne is the fabulous marketing person for Inner West Community Enterprises. She was born in the west and moved to the Eastern suburbs when she was 10, returning in 1997 when her grandmother passed away and the family wanted her to look after the home. The sense of community amazed her – she loved how neighbours talked, people said hello when they walked by from the station, everyone was so friendly – she decided I didn’t want to leave. .

“My great-great grandmother moved to Kingsville in the early 1900s. I’m a 5th generation westie on both sides of my family. My grandfather was Mayor of Footscray in the 1960’s and then moved into state politics as the Member for Sunshine. My family home has seen five generations pass through it as it’s been in my family since the 1930’s.”

Bringing up a child in the inner west has created a very strong connection to the community. As a single mum, she has always felt supported and the two of them have made many lifelong friends – like one big extended family.

“It’s a bit like a country town. I have always said to my daughter ‘Don’t get up to any mischief, you know someone we know will see you’. However, the community connection creates a sense of safety that has enabled my daughter to have a lot of freedom and independence.

What changes has Suzanne witnessed?

“I used to tell people I lived in Seddon and they had no idea where it was. There was a real stigma about living ‘over the bridge’. Now people envy the fact that we have such a lovely community, so many amazing cafes and restaurants or the cinema in walking distance or we can jump on the train and be in the city in 15 mins.”

And what small joys does she find each day?

“During this period of isolation, I love that I can still walk to Footscray, Yarraville or Seddon and see friends, neighbours, shopkeepers on the way – the sense of community has really been heightened during this time. Also there’s been so much sharing – my neighbour has been making fabulous sourdough bread, friends offering to pick up shopping on their outings, mowing each other’s lawns, brief chats across the fence.”

Suzanne is looking forward to being able to return to her favourite hangouts; Miss An’am, Barkley Johnson, and more recently, Navi, but her true hopes for the future is that this sense of community is maintained, after this period of self-isolation.

“We have been reminded how important connection is.”

HOW CAN WE HELP SMALL BUSINESSES THRIVE?