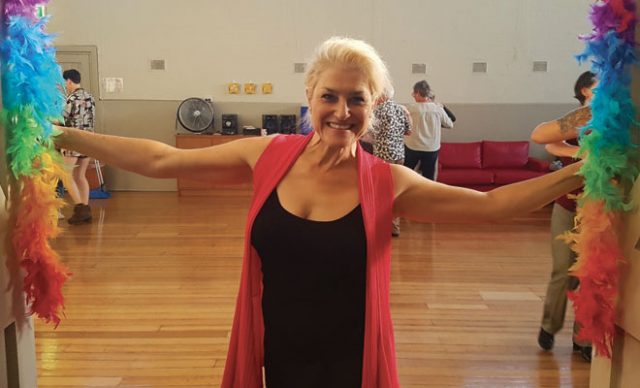 Anny Salerni runs Queer as Foxtrot, a Same Sex Ballroom & Latin American social dance space and studio for the LGBTQI+A community. Basically it means men don’t HAVE to lead and women don’t HAVE to follow, anyone can be a ‘Fred’ or a ‘Ginger’, as they please. She holds “just turn up” Friday Socials in Footscray every week, at the Scout Hall behind Footscray Police station near Footscray train station.

She’s been living in the west for over a decade, and started classes in a few years ago.

“It’s a great space for dance, which is why the hall is so heavily utilised. We’re a friendly group of mainly beginners and novice dancers who are learning to dance for fun, exercise and social reasons. You don’t have to be a member of the LGBTQI+A community to attend, but you need to be prepared to dance with people of the same sex, and the opposite sex too, as we change partners regularly.”

Anny moved over from the North to Spotswood, the containers and industrial landscape was the attraction, mixed in with the palm trees and sea, which she finds lovely.

“I still live in the area although recent rent increases have moved me out further to Altona, I can almost see the gas flame from my doorstep now, which sadly, I also love. Yes, I’m quirky. So much has changed, the tunnel works have been the major thing for me. All I want to do is explore the tunnel and general construction area, with a torch once everyone’s left – the problem is, it’s a 24/7 site, so my chances are very slim!”

For small joys, Anny loves people watching, especially when she’s around Footscray, with so many interesting people and sights and smells.

“It’s a place where the entertainment never ends.”

For favourite hangouts, the Dancing Dog was her go to, but Anny also tries different eateries along the Footscray strip, and loves how there is so much to discover – she ventures to new places as much as the old haunts.

And Anny’s hope for the future?

“I really hope to stay in the West on an ongoing basis, and keep the dancing classes going too for quite a while or as long as they’ll put up with me!”