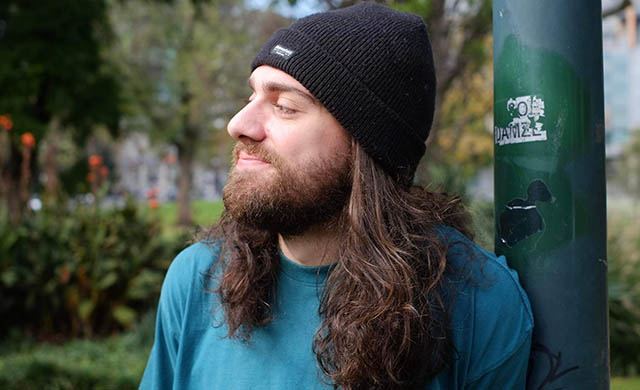 During one of the most creatively stagnant times for the arts in 2020, Adriano Pruscino was carefully handcrafting a rupture of neo soul electronica between night shifts.

Rich tones of tactile instruments blend with the artificial sounds you can manufacture on a MacBook Pro. Even stranger, the beautifully delivered vocal features are fractured by eerie cracks of sampled capitalist propaganda from the post-war era. About the album, Adriano says “I wanted to do something f*cking ridiculous.”

Known for being open-minded and a little out there in his creative processes, Adriano has been living in Melbourne’s inner west and writing and producing his own music for years. He now boasts a budding music producing business, a Bachelor of Music at VU, home studio, more side projects than he can recall and even a shared birthday with Jimi Hendrix.

When writing ‘Free’ Adriano says, “I was writing it like a stream of consciousness – whatever came to my brain. I was just going to record it, and structure it together later.” This twenty song album is separated into sections of a narrative. The story follows the steps of a hero’s journey which are told by many of the West’s most creative collaborators who feature on the tracks.

‘Free’ isn’t easy to describe with musical genres. It sounds as if you’re wandering through an old 90s arcade. Imagine neon green lights flashing in polymetres with a warped dollar sign showing you where to put your loose change.

Compositionally, Adriano is a musical shapeshifter. With a deep appreciation for so many different kinds of sounds and timbres, he has been able to access a myriad of different colour combinations to cultivate this unique sound.

Adriano is also apprehensive to tell you too much or how to think about his music. “I was set on creating a critique on capitalism…but not saying anything in specific,” he says. “I know I had a really specific idea about what I wanted to say, but that’s totally besides the point.”

In the beginning, ‘Free’ has a satirical tone. The voices are almost mocking and taunting you with this idea of having disposable money. Halfway through, the storyteller crashes and burns inside their obsessions as the protagonist spirals inside the emphasised rhythmic samples such as “to live life you need problems” and “there’s more to life than a little money you know.”

The conclusion rests open ended, leaving the listener to ponder through these themes – by being totally aware but accepting of the uncertain nature that money always seems to bring.

Now two years after the initial release, when asked why Adriano didn’t do more to promote ‘Free’, he explains that it was something he’d figuratively hung up on a wall. He hoped people would stumble across it completely on their own terms.

Starkly contrasting capitalistic ideation, Adriano Pruscino’s ‘Free’, is exactly that – accessible and free for anyone to listen to for nothing. It is available on all listening platforms including Bandcamp https://adrianopruscinomusic.bandcamp.com