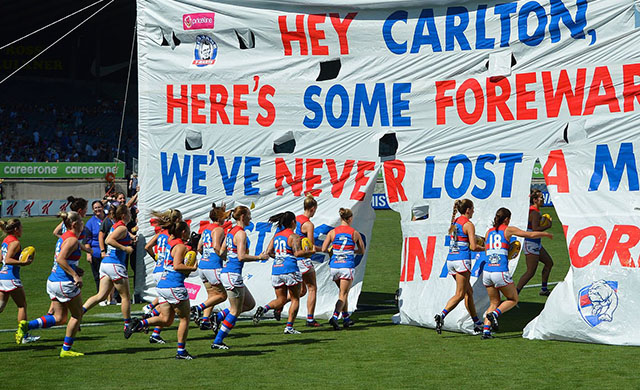 Footy is back! After last year’s season was cut agonizingly short of “the big dance”, I am sure many teams are eyeing a big finish for this year. Unfortunately for the dogs, finals did not eventuate, even after winning the premiership only 2 years ago. Success was not to be repeated with consecutive failed finals appearances.

It’s unusual to say the words ‘rebuild’ for a team that has really only been around for 5 years, but that’s how it feels to me – ever since the departure of some huge names like Katie Brennan, Monique Conti, and Emma Kearney. That’s a captain, best on ground in a grand final and a league best and fairest. Its expansion clubs we have to thank for this, but it’s not all bad for the Dogs as we have picked up some impressive talent such as Gabby Newton and Jess Fitzgerald, the latter yet to play a game. Along with emerging super-star Isabel Huntington, things are looking great.

2021 has brought a change – the removal of the conference ladder system – which was a terrible idea in the first place. It kept lower teams from playing the lower teams and only caused huge losses and zero wins for some. These days the dominant teams are North Melbourne and Fremantle, closely followed by Carlton. But this is a new year and things change, and fingers crossed in favor towards the Bulldogs.

I won’t say its going to be a year of the Bulldogs dominance but its going to tell us about how the future will pan out. One player I am really excited to see is Bonnie Toogood, really making her mark in the forward line and I expect her game to simply be amazing this season. Her hard work in the off season is going to work in her favour. Another thing this season is going to show is who is going to be the main goal kicker for 2021: Brooke Lochland can’t do it alone all the time. With a strong defense in the team already and a decent midfield I reckon up forward is the final peace of the puzzle.

All I want to say for 2021 is best of luck to the women’s team, and for everyone else to get a membership. Its relatively inexpensive to almost guarantee a ticket because these days you need to book – plus the membership is the best way to support the club. These can be purchased via https://bit.ly/3rjsJRF.

Match tickets are available from womens.afl/matches/2021

FOOTY 2021 IS READY AND WAITING