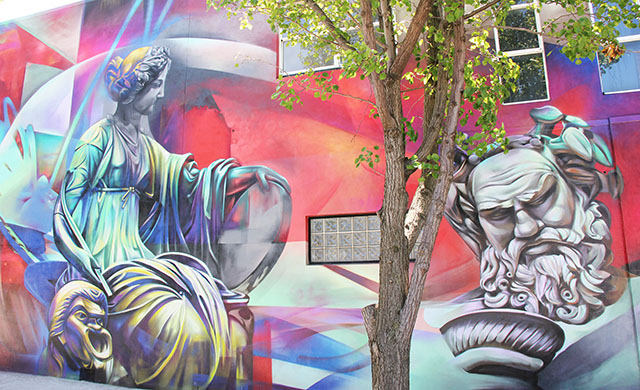 A mural celebrating Greek heritage and connections with the inner-west is popping up off the Wembley Ave shopping strip in Yarraville. Driven by local Dean Kotsianis, this is street art with a difference. The Westsider was curious, and Dean was happy to tell us more.

So tell us about the project

What was behind the idea?

We surveyed locals, and turns out their biggest appreciation for Greek cultural comes through the lens of antiquity.

Where does the imagery come from?

We’ve grabbed symbols to play on Yarraville’s most famous Greek stories. Our different figures in the design represent different institutions of the Greek-Aus experience of Yarraville. Thalia celebrates the Sun Theatre during its Greek phase of ownership, as a community hub. Dionysus celebrates the Kafeneia (very different from Melbourne brunch destinations) and taverns that opened the Greek culture up to locals. And Hermes celebrates the migrant journey and cultural exchange more broadly as well as the post office/pharmacy on which we’re painting. It’s a great spot because of Wembley Primary School – has potential to be turned into an educational/excursion destination to teach about Ancient Greece, local history or both!

Tell us about the Greek Youth Generator

We are a bunch of young people with different expertise and interest who want to shake up the cultural scene. We want to act as a community directory and cultural think-space to allow the transition to community volunteering and project building easier. We aim to share our event blueprints, resources and expertise to other keen young people who want to make their mark and experiment with their cultural identity.

How did the Greek Youth Generator come to be involved in the mural project?

We want to deliver locally relevant projects in the multicultural space. Many of our team live close by to the wall site and have passed it for years. My family has historically had shops along Wembley Avenue’s business strip for generations. We thought it was time to turn focus to our local corner and do something awesome with it.

It’s not your standard mural – how will it work?

Apart from the painted mural, the space we will be building a digital archive accessible through the wall, with potential to turn it into excursion destination. The next phase of this project is to interview locals and recapture our not so ancient Yarraville history. The digital archive of this local history will then display via QR codes associated with the mural.

What’s the timeline for its development?

Painting started late in January, but it will remain for a long time to come.

How can locals help or contribute?

The website gyg.org.au is where they can head to support with fundraising or even by submitting photos and stories relating to their run in or life in the Greek community of the Inner West.