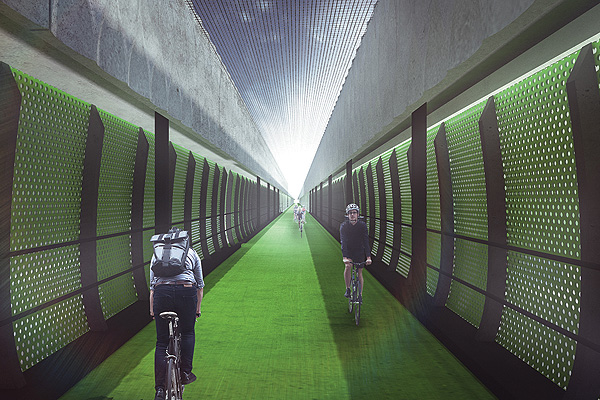 The cycling and walking network in the inner west is about to undergo the biggest transformation the area has ever seen thanks to the West Gate Tunnel Project.

The project design includes the creation of over 14 kilometres of new and upgraded cycling and walking paths, the completion of the Federation Trail and a new 2.5km state-of-the-art veloway above Footscray Road.

New links will be created to residential precincts as well as parks and waterways including Kororoit Creek, Stony Creek, Maribyrnong River and Moonee Ponds Creek.

When finished, it will be the first time cyclists and pedestrians will be separated from cars and trucks for the entire journey from Werribee to the CBD.

The veloway – a Melbourne-first – will be suspended under the new elevated roadway, giving riders a safe ‘express route’ to and from the city.

Bicycle Network Senior Policy Advisor Garry Brennan said the changes are the biggest and most exciting improvements to cycling infrastructure in Melbourne’s west.

”The veloway will be fantastic as riders will be able to access the city quickly and safely by avoiding busy intersections and traffic lights.

“The ‘missing link’ in the Federation Trail will finally be completed with a new off-road path between Fogarty Avenue and Hyde Street and upgrades from the trail from Kororoit Creek to Fogarty Avenue.

“I expect to see the number of people cycling to work significantly increase and more recreational riders using Federation Trail during the day and on the weekend.

“It’s a major game changer for the area as the new connections will make it so much easier for locals and visitors to get around.” Garry added.

Upgrading the bicycle and walking network will cause unavoidable disruptions for about four years.

The project and relevant agencies explored several routes and Garry said it was challenging to find a suitable alternative.

”The Federation Trail is the only true bike route in the area, so when that is unavailable it leaves few options,” Garry said.

“An alternative route has been selected that connects from Fogarty Avenue through to Millers Road via streets through Spotswood, South Kingsville and Altona North.”

The West Gate Tunnel Project team consulted with the local council and bicycle groups about the closure to ensure the detour is a safe option.

For more information and a full list of the upgraded and new walking and cycling paths, visit http://westgatetunnelproject.vic.gov.au/cycling-and-walking/