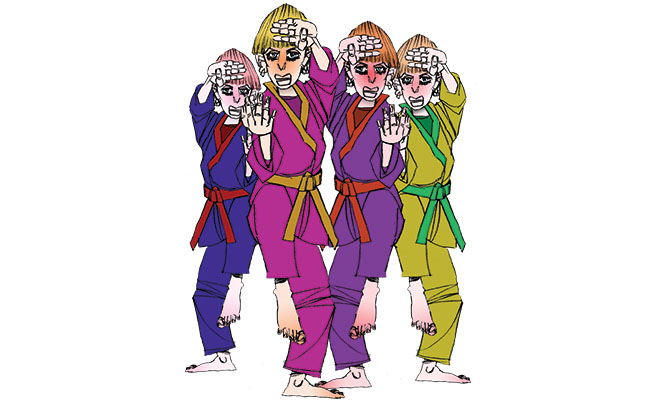 Have to tell my story. My future depends on it. As we get into another day of this, you will remember that my mother kept secret from me the largely accepted necessity of a financial transaction matching an exchange for goods. I’m not sure if the same applied to my four sisters. I have never asked them. No matter, we all became participants in the family business. Grand larceny I expect you might call it. To me and my sisters, Chrissie, Rob, Myra and Lindy-Lou, it was just what we did.

We stole things and then sold them at a discount through the family store, the Warehouse of Hope. I’m not going to explore the morality of this. I’ll leave that to you. Suffice it to say, we tried never to hurt anyone who didn’t deserve it.

A corollary of this endeavour was that it allowed my natural talent for doing sums, and a native understanding of things fiscal, to thrive. At 16 years of age, I was the Chancellor of the Exchequer of our rickety endeavour, and go-to Chief Financial Adviser for our partners. Mr Nitro O’Nitro, biker gang capo, and Russian emigré, Sligo de Putin, were, from time-to-time grateful, for my intervention in their financial doings that otherwise might have attracted the unwelcome attention of the Australian Tax Office and like authorities. I was also motivated by the real probability that my mother too could be offered a diet of porridge should any of these ‘misunderstandings’ find their way into a court of law.

Our bumpy little journey had recently encountered a bit of a pothole. My father, Maurice ‘Shortcut’ Shevel returned to the family bosom, after a thirteen year absence, with a clumsy attempt to blackmail my mother and, through her, both Mr O’Nitro and Sligo de Putin. He has been exposed and now finds himself cable-tied to a chair in the cold room of one of de Putin’s Go in Peace ‘departure’ franchises – the name his chain of funeral parlours luxuriate in. He is aware he is about to be ‘re-educated’, but appears resigned.

Also in the room is a master of the darker tattoo arts, Fitty MacTavish. He is known in prisons throughout the land for his consummate renderings on human skin of Spanish artist, Francisco Goya’s etchings ‘The Disasters of War’. These often gruesome scratchings remind the viewer of the barbarity of war as prosecuted by the French. Just so you know.

A late petition from my sisters to the kangaroo court formed to decide dad’s fate, allowed the verdict that had been heretofore hard to reach. Mum, Mr O’Nitro, Sligo de Putin and two biker executives, the gang’s Sergeant-at-arms, Gavrilo ‘The Crowbar’ Nero, and Tailgunner, ‘Hot Fat Vat’ McKinnon, had struggled to agree on a suitable sanction that would remind dad, and the world, of his folly for all time. While The Crowbar and Hot Vat Fat erred on the side of providing Shortcut with a physical disability, the others thought that a bridge too far.

’That is not who we are,’ they reminded the now sulking thugs.

For his part, Shortcut Shevel had mentally quit the scene. His compulsive need to move on to ‘the next thing’ had him musing about the possibilities of the substantial returns that the death industry might offer him. It would, of course, have to remain true to his life philosophy: minimal personal risk for maximum gain. If that meant an aberrant relationship with the law, then so be it. I watched impressed as his mind wandered out of the cold room and into this reverie, but I was brought back to earth as the flatness of the back of his head in silhouette reminded me of my paternal parent’s shortcomings. I also feared that genetics may yet play a cruel trick on me and my sisters.

I don’t think it will come as a surprise that Shortcut’s fate rested in the hands of the Scottish inkmeister. Mum, Mr O’Nitro and de Putin had welcomed the sisters’ suggestion, nay, insistence that dad be marked forever with clear evidence of his careless sins. That it had an historical precedent in this country’s feral past lent a certain gravitas to the sentence that satisfied any untidy doubts. It was history-buff Lindy-Lou’s discovery that recaptured deserters from the cruel colonies of Hobart and Sydney were either branded or tattooed with the letter ‘D’ to remind them of their sins and warn others of the futility of such shenanigans.

To sate the bloodlust of some less evolved members of the gang, it was decided that dad would be illustrated across his entire body with evidence of his crimes. It was decided his face be left fallow, though there was some open insubordination about this.

The next problem to solve was which of his myriad infringements would make the cut.

‘Does anyone remember the Runcible-Hatt sisters?’ asked mum. Though I had yet to be born, the legendary Runcible-Hatt Sisters Takedown was the stuff of folklore in our family and had been retold many times.

The Runcible-Hatt sisters: Bronwyn, Veronica, Constance and Dymphna went nowhere without each other. In their Victorian pile, four doors down from our own modest dwelling, they shared a formidable library and spent hours debating history, philosophy and politics. They would take different points of view for the sport of it. In the moments between intellectual jousting, they pursued their mutual love of martial arts. They became experts because they had to.

Their father, Lord Runcible of Pimlico, had made an eye-watering fortune looting third world countries of their minerals, sometimes known as theft of generational wealth.

On his passing, the daughters, wracked with guilt about the antics of their rapacious father, set about righting this appalling wrong. They sacrificed a personal life for one focussed on the penitent repatriation of funds.

Mindful of the capacity for venality of upstart power-grabbers in these regions of the world, the four women instituted an elaborate and considered method for wealth redistribution. Funds from a blind trust were invested in infrastructure, health and education of victim nations through a complex web of institutions that hid the identity of the donors.

Rumour, however, is a relentless beast. Though they went to great lengths to deny it, the women had been identified as the money’s source. Many chose to believe their repatriation of monies was wholly cash-based. Gossip insisted that the Runcible-Hatt house was virtually a cash castle.

On hearing this, from a bloke in a pub, Shortcut Shevel, regarded it as a sign for him to set about enhancing his own wealth. ‘It’s meant to be,’ he told himself. And with that sophisticated reasoning, he decided to help the ‘girlies’ out.

Shortcut preferred to apply only a modicum of planning to his ventures. Over several days he monitored the Runcible-Hatt home to discern a pattern of their comings and goings. On the one occasion he sighted the quartet leaving en masse, Shortcut found his way into the maison through a downstairs window. Unfortunately for him, Dymphna had not felt that the energies were appropriate for their adventure and the women had ordered their driver home.

Shortcut’s propensity for sly babble abandoned him when he was interrupted lifting tatami mats in search of the non-existent treasure in the women’s purpose-built dojo. Even he thought his early excuse-making, ‘I lost my ball’, was a bit light-on.

‘Ball’, however, became the appropriate metaphor for what happened next. Ever-polite, the four women continued to address the man they recognised as a neighbour as ‘Mr Shevel’ as they enumerated his sins. Then they took turns in tossing our hapless burglar about in a businesslike demonstration of some of the more effective martial arts techniques.

Needless to say, the bruised and battered carcass of Shortcut that was unceremoniously dumped on our doorstep by the ladies’ factotum, housed a mind that had deflected the lesson and was busily wondering how he could turn this martial arts experience into a profit of some kind.

‘Did he locate the cash?’ pondered de Putin aloud. His nascent grasp of English had abandoned him early and he had assumed that the discussion was about revisiting the Runcible-Hatt house to complete the mission bungled by Shortcut.

‘It would seem,’ said Mr O’Nitro, ignoring de Putin, ‘that Shortcut was punished enough and this failure is hardly a candidate for inked posterity.’

‘Oh there are plenty of others that fit the criteria,’ mum told him. ‘This is merely an example of the sheer brass of the man, to give you a whiff of what we are dealing with here. Pull up a chair, this might take a while.’

And with that, mum set about listing the many transgressions Shortcut had visited upon the innocent, the halt and the lame. Occasional additions and clarifications also erupted from the research into their father that my two older sisters, Chrissie and Rob, had dedicated their considerable curiosity to.