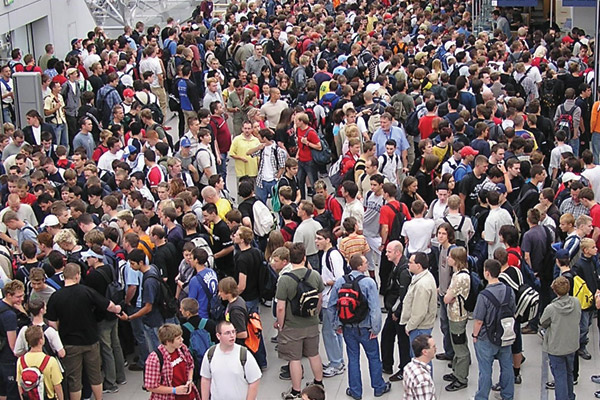 “We wait. We are bored. No, don’t protest, we are bored to death, there’s no denying it.”
Samuel Beckett, Waiting for Godot.

Any foreigner arriving at Heathrow Airport will know exactly what Mr Beckett was referring to. It’s probably the only thing he and Homer Simpson have in common; they both know the waiting game sucks. Derek Green wonders where Karl Pilkington is when you need him.

After countless dull hours strapped into a chair with minimal personal space, flying at 30,000 feet in a metal tube carrying tonnes of highly explosive aviation fuel, piloted by some guy my family and I don’t know, all we want to do is walk off the plane straight into our hotel lounge in time for happy hour. Truth is, we know our ordeal isn’t quite over, especially when arriving at the busiest international airport in the world.

We quickly empty our overhead compartments and bolt from the plane, passport and passenger cards at the ready and neatly completed in BLOCK CAPITALS. Our hearts sink as we see the two queues at immigration – they resemble the entry to Disneyland’s Splash Mountain at noon on a Sunday in the middle of California’s school holidays. Expected wait time from this point; unknown.

My guesstimate is that we will be stuck for an hour as we shuffle forward like a pensioner with their shoelaces tied, watching and re-watching the UK Border Agency info-video on the screens overhead, reminding us that added security measures will result in longer wait times. What this informative presentation does not mention is that only a quarter of the booths will be operative, nor do they explain that we may encounter a staff member with lamentable queue organising skills, who will continually siphon large groups from the back, and add to the frustration of those tantalisingly near the front.

Signs indicate the use of cameras and/or mobile phones is prohibited, which after an hour of statuesque existence feels like 48 hours in a windowless airport security interview room without a pen, pencil, drink or phone call.

A sneaky game of iPhone movie trivia kills more time, but ends abruptly at The 40-year Old Virgin: “Er, it’s a film about a man who, erm, well you’d think being older than 39 and younger than 41 would have, um… well you’d reckon he would have… oh look the battery’s gone dead!” This multicultural conga line is still PG-rated after all.

As the flow of weary humans continues like sheep pouring into a spring saleyard, a quick head count reveals there’s now about 2,500-3,000 people in the alarmingly bottlenecked immigration hall.

Meanwhile, our line seems to have stopped. One immigration officer is now servicing us, and she is attracting all the complicated cases, courtesy of everyone’s least favourite security employee.

“Looking like a hobo without a return ticket or means to support yourself? Step right this way!”

Finally, one such case is so complicated it requires our potential saviour to depart – and I’m ready to risk a strip search and water-boarding session to jump the ropes and accost anyone who looks like they might be in charge.

Thankfully, a chap at the front of the line – clearly close to tears – does just that. The penny drops, and hey presto, our stationary queue is slowly diverted to other booths in an effort to clear the backlog.

Two hours have passed, and finally a cheery Cockney chap smiles, grabs our passports – which he can’t stamp quick enough – and gestures us through with a salute and quick sledge about the Australian cricket team. I suspect the added “security” we heard so much about amounts to subtle mental torture of all new arrivals to the point where they consider giving up and turning around, taking their dastardly plans with them.

In the meantime our bags have come and gone from the baggage claim belt, our mini-cab driver has abandoned us, and tonight’s hosts text to declare their intention to eat dinner before it becomes day-old leftovers.

If Beckett could have stood with us he would have sympathised, and may even have renamed his masterpiece accordingly.