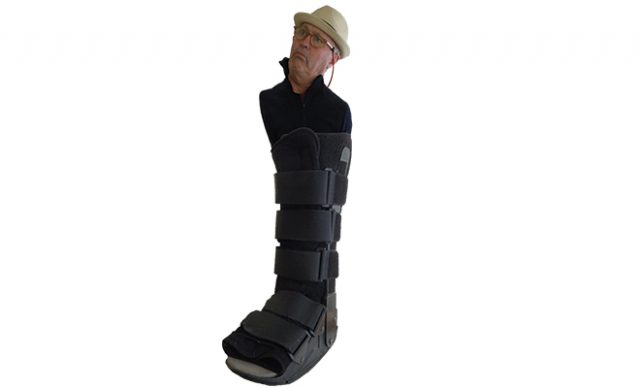 It began well enough. The weather was still kind and I had distractions galore.

The novel that I had promised myself to write by April 30 was 100 words in and showing heaps of promise. Promise enough to allow it to lie fallow for a few more days, or weeks. My column for The Westsider was finding its way and I was keen to see where it went.

I could still exercise. I had a bike. The pool was closed, but black line fever was never something I enjoyed that much. Golf courses were about to close, but my homemade driving range would allow me to improve exponentially and steal a march over my teammates. Endless kilometres of urban jungle invited me to explore them on foot.

I was as healthy as a man with a penchant for ‘just one more glass, thanks’ could be.

Perhaps the twisted ankle was some kind of an omen.

Walking became a painful chore; swinging a golf club, hopeless; bike riding, impossible; swimming, banned. I could drive, but where to?

Sounds started to intrude. My wife, a teacher, was distracted by the demands of the online classroom. Not a digi-human, there was much disgruntlement coming from her ‘soft’ office [our bed]. A neighbour’s house was being loudly demolished. Lawn mowers became an insistent irritant as my own verdant green mocked my infirmity by growing at a rate that defied botanical norms.

Visual reminders began to rankle. Those wonky roof tiles that need straightening. That guttering leaking into the ever-softening ground below. The weather corner, sinking deeper with each further downpour, its crooked parallels openly taunting me, the paint cracking and chipping off the rotting weatherboards.

I hid out in my workroom. I watched the entire 2013 US Masters, knowing the outcome. Then the 2018 version. I partially tidied things, then untidied them. I played the four chords I know on my guitar over and over and over. I napped. Siesta brought dreams of a litany of lost opportunities and brass rings just out of reach. I woke exhausted.

I became a sniper, admonishing right wing nut jobs with carefully hewn insults. I invited Donald Trump to fight me. I challenged Boris to a duel. Morrison ignored my withering exposures of his flaws. I was scathing, inappropriate, intolerant, bad-tempered and then by turns, hilarious, incisive and wit-soaked. I got bored. I photoshopped dimwit politicians as clowns, then [thankfully] binned them before posting. I was stitched up by threads of nonsensical claims and conspiracy theories. I became evangelical about evangelicals [of every stripe] and their simple-mindedness. Perhaps I was envious. Perhaps I was losing my way.

When the sun snailed deep into the western sky, I began to prepare food. What is cooking without wine? One for you and two for me. Culinary catastrophes ensued. I wasn’t hungry anyway.

What’s on TV? No? That’s OK I have Netflix and Stan and AppleTV to fall asleep in front of and wake to demand of my long-suffering partner: ‘Who’s that? What’s going on?’

She ignored me, cast doubts, undermined, insulted and ridiculed me. Chastened, I offered reparations, a detente. She urged that I take a ‘good, cold, hard look at myself’.

And then little shards of light began to appear. A dog with a helicopter tail. Endless tik tok cack fests. An old friend prised open Facebook. Goats. The moon boot soothings. Vika and Linda Bull sing a cappella. Our NYC-based daughter passes her Covid test. Ozark is back. Killing Eve is back. Tsiolkas writes like a writing god. Facetime, Zoom, ebay, Booktopia, Vinomofo. I smile at passing walkers. They smile back. My elderly neighbour is pleased to hear my voice.

I am slowing and beginning to fit.