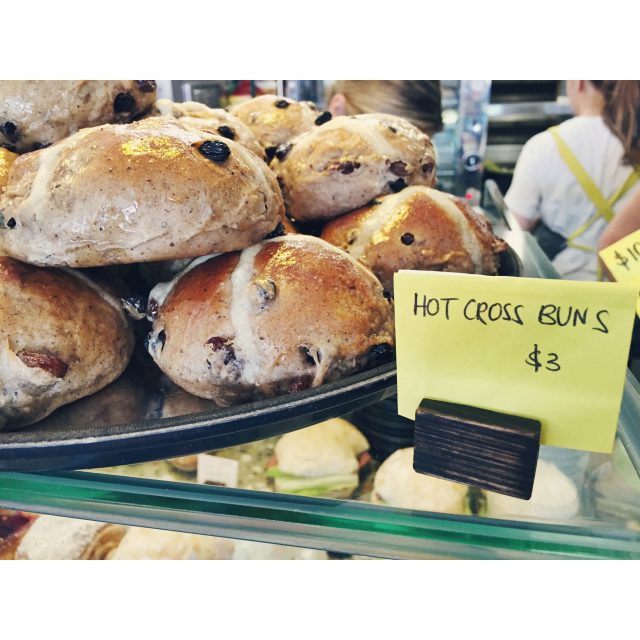 We wait for them all year. The supermarkets have had them on their shelves since December 26th. The holier than thou amongst us do our darndest to avoid them until mid-March at least. They’re spicy, fruity and best toasted and smothered in butter. Hot X Buns, who doesn’t love them? But where to find the best in the west?

The Westside Seagull has done all the hard work for you. We’ve forced ourselves to scoff these delicious delicacies toasted and dry, hot and cold, fruit and chocolate until we had cinnamon coming out of our ears. The results are as follows.

An Easter Classic, you feel a little bit classier buying your buns at ‘Bakers’ rather than Woolies, but how do they measure up? You’re always safe with a Bakers’ Delight Hot Cross Bun. They have a consistently soft bun and taste best hot and buttery.

But if we’re being honest (or waving our foodie freak flag) – they’re a little bit on the safe side.

Very mild on the spice-o-metre; ‘flavoursome’ is not the first adjective that springs to mind. But for those Easter weekend Hot Cross Bun marathons (or to feed the kids), they’re excellent value for money – weighing in at $1.40 for a single bun. Family friendly and somehow so much fancier than a Sunicrust Bun, the Seagull rates the Baker’s Delight Bun a solid 7/10.

So, for those of us who have a bit more of an adventurous palette when it comes to religious baked goods and are looking more for the taste that Aunty Mildred used to dish up during Bunny Season – maybe head to Cobb Lane.

Soft and fluffy buns with a good kick of spicy cinnamon, nutmeg and that super shiny glaze that usually only maiden aunts can achieve. Surprisingly these buns really shine when eaten fresh, the soft and fluffy-ness doesn’t quite hold up to toasting the way a semi-stale Baker’s Bun might. This is the bun we recommend throwing in the lunch bag – if the toaster at work is out of order (as it usually is) it doesn’t matter! The deliciousness of a Cobb Bun is at its best straight out of the bag. 8.5/10

The pick of the bunch comes from a shiny little spot south of the bridge. The array of baked goodies at Candied can be overwhelming, but come early April the choice is all but made for you.

The denseness of the dough may initially remind some people *coughpeoplewithbadtastecough* of the buns they were forced to make in Catholic School Home Economics class – however the fruity flavour is explosive and the orange zest a little party for your taste buds. Once these babies make the journey from the paper bag to the grill, these buns really come into their own. The flavour holds up better when toasted than any other bun we’ve scoffed and smothering them in butter only adds to the deliciousness. 9.5/10

We at The Westsider demand that everyone put down this paper right now, head to your local baking establishment (whether it be Coles, Baker’s or your local schmancy boutique bakehouse) and eat a Hot Cross Bun.

And please let us know – do we have the best of the best in Melbourne’s West?