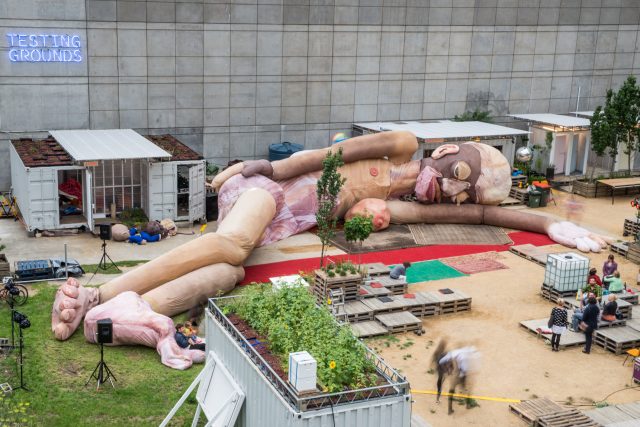 Q. What was the first Snuff Puppet?

A. Funnily enough a puppet called Granny. She is an old lady puppet and is the matriarch – she’s the oldest and kind of like this character from a play we made called “Scary”. She is pretty old now so she is more of a museum piece.

Q. How did you transcend from being a local art collective to creating these global projects?

It really was just about sticking to our thing I suppose, not really going in any other direction, the collective idea was to create something that was unique and of our own making, not commercial based or business based, we just wanted to make this one kind of thing. We did the Moomba parade one year and there was a Japanese guy among the V.I.P delegates. Osaka is a sister city of Melbourne and they came and saw our stuff and they went “Oh we should bring that over” so they asked us. From there you kind of build up and you can say “Well, we’ve been to Japan and we’ve got the photos to prove it”. So yeah, you just build up, up and up.

Q. Do you ship the puppets or do you create them on site overseas?

We do both, we take puppets in road cases. All the puppets are designed to come apart. Their skin comes off. Everything has to be packed down really small, that’s if presenters want our puppets for shows or parades. We do this other thing called the P.P.P which is Peoples Puppet Project, where we run an intensive two week puppet making workshop. We build the puppets that a group will design and we kind of facilitate that process. We source all the materials in that country and then we build puppets. We’ve done it all over the world from China, Korea, Denmark, India, so it’s really interesting culturally.

Q. Are there any cultural barriers with the way the puppets appear?

Not really, there are the obvious ones that have strong religious beliefs, we’ve done a lot of work in Indonesia and we have to be respectful of the strong Muslim culture there but at the same time we’re interested in pushing boundaries, challenging people’s ideas. Sometimes it’s exciting to have a puppet that is naked; you get to see people’s reactions.

Q. What’s happening in the future?

We never know. We sell the work, we wait for people to call or we chase people. We just made the biggest puppet in the world which is called “Everybody”. We’ve got work in Brazil and Japan, lots of countries call us and it builds exponentially as you keep going, more people become interested.

Q. What was the outcome of the Guinness Book of Records attempt?

We have all the evidence and the minister came down here. We just have to wait for them to tell us, “Yes you have the biggest puppet in the world”. The previous record holder was 17 metres, ours is 26.19 metres.

Q. How long did it take to make “Everybody”?

About 6 months. The hardest part was the small details, it became time consuming.

Q. Do people rotate through this project?

No, we have a core group of artists that work with us. One of our members, Stefan came to us as a dancer but he learned to make puppets, he’s also a puppeteer and a performer, he still dances so it’s a big mix of art forms.

Q. Do you have much competition in Australia or internationally?

Not really, we work in the spectacle arena, that’s our kind of business. I don’t know if there’s any other group like us in the world, we’ve taken this idea of the giant puppets having their own character so I think we’re pretty unique.

Q. What inspires the characters you develop?

Q. If you could collaborate with a specific artist who would it be?

Generally people who come knocking on the door and have a personal interest in what we do and want to have a go. We don’t have a big budget so we would like people to volunteer to help.

Q. Why are they called “Snuff Puppets”?

Our philosophy of ideas comes from birth, sex and death – generally a dark edge on the circle of life. When we were working in Canberra we saw groups of young artists being radical, trying to make big things, we had a visual of the newly built Parliament house being stormed. At this time we were doing shows with fire and smoke and the idea of a puppet being burnt at the Parliament house gave us the name Snuff Puppets.

Q. Is there a message in your pieces?

I suppose every show has a different message, the strong messages are about freedom of expression and liberation – just doing things that are really out there and trying to kinda say; “It’s OK”. Everyone’s very guarded and protected and we are told to not do things but it’s good to say well, why can’t we do crazy things and be a bit ‘out there’. I feel that’s a better way to operate in life. The puppets give a big effect, so we want the message to be similar.

Q. Do you have something that inspires you?

(Laughs) When we take the puppets out into the general public and we have this kind of reaction (it’s at this point in the discussion one of our Westsider team is laughing hysterically as a giant ear envelopes her) its pretty crazy – we know what’s going on here, but when you’re out on the street and something jumps on you, people will never forget it. That’s my inspiration.

Q. So where’s the next place Westsiders will be able to see your work?