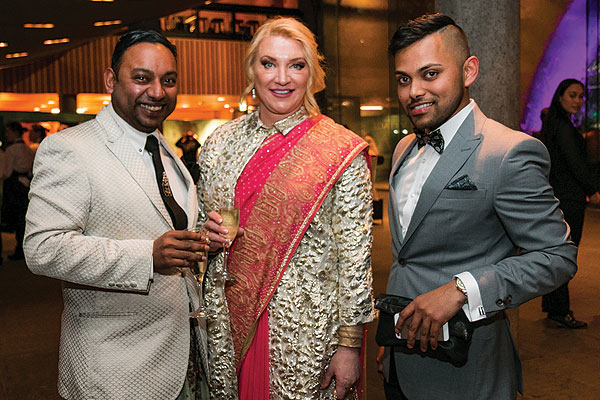 By Styled By Ramzy

August in Melbourne; though cold and rainy it was given colour and vibrancy with Indian culture, fashion and tradition. India brings a different taste to the world; delicate fabrics, lively songs and dramatic movies. The Indian Film Festival of Melbourne (IFFM), held between 14-27 August, honoured India’s prominent designers, actors, producers, filmmakers, screenwriters and couturiers.

Styled by Ramzy was pleased to be a part of the IFFM Awards Night and Equality Fashion Show where Bollywood’s biggest stars attended a runway fashion show. IFFM paired up with the City of Melbourne and held events and openings throughout prominent locations such as the National Gallery of Victoria and Federation Square. The Equality Fashion Show held on 15th August captured the exuberance and live colours, yet still remained true to India with its deep history and roots. The spectacular night featured an exceptional guest list to recognise films, short films, directors, producers and actors who have excelled in their chosen professions.

The star of the night was undoubtedly Sonam Kapoor, fashionista and style icon of her generation who lit up the runway with remarkable designs and a beautiful physique. As the face of L’Oreal Paris, she is a promising actress, and after the Cannes Film Festival earlier this year, Sonam has reached new heights, truly making herself known in the international arena. Her father, Bollywood classic Anil Kapoor, well known as the star of Slumdog Millionaire, also made an appearance. Our very own Real Housewives of Melbourne sensation Pettifleur Berenger shared in the celebration and looked stunning for the occasion.

With almost 1000 in attendance, the Equality Runway Show was a beaming success, featuring various designs from Anamika Khanna, Gaurav Gupta, Susan Dimasi, Roopa Pemmaraju and Richard Nylon. Joining forces with Melbourne Royal Children’s Hospital, proceeds from the silent auction will go towards a great cause.

Bringing two cultures together and celebrating all things art, fashion and movies, the Awards Night and Equality Fashion Show was one to remember.

Styled by Ramzy is a Melbourne based styling company founded by Ramzy Nawzar, a fashionista living in Western Melbourne. Embodying all things fashion and glamour, Ramzy is a truly innovative and eccentric character, encouraging all his celebrity clients to balance individual style with current trends and statements. Writing fashion columns, supporting charity events and styling both local and international celebrities, Ramzy has built up his business and aims to reach new heights in the fashion sector.