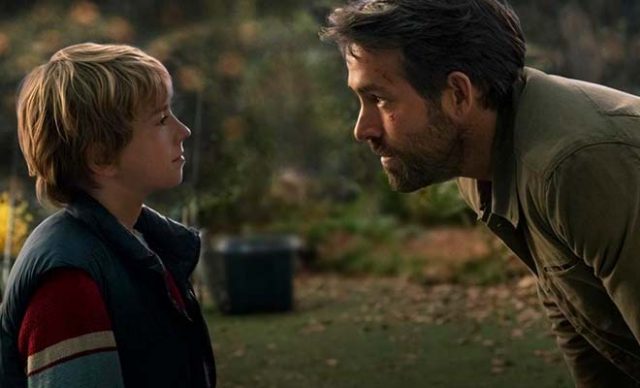 Netflix’s newest sci-fi action stars Ryan Reynolds as Adam Reed he travels back in time from 2050 to 2018 to complete a rescue mission.

Upon landing in 2018 he runs into his younger 12 year old self and reluctantly asks for his help to save the future, whilst he is being hunted by a corrupt leader from said dystopian future.

TAP is a sorted blend of Back To The Future, Looper and everything else Ryan Reynolds has been in since Deadpool. It’s gotten to a point now where Reynolds is just playing the same characters, which is actually just himself. If you like his funny, witty and charismatic sense of humour then prepare to get double doses of it. Young Adam Reed is played by Walker Scobell, upon research on the film after viewing I came to realise that this movie is actually Scobell’s debut! Scobell is THE perfect young Ryan Reynolds, to his inflections, to his line deliveries and his subtle demand and control for screen presence. The chemistry between Reynolds and Scobell is charming, you can feel the two actors really enjoying the roles and the improvised banter which I feel is where the movie holds the audience in.

This is the second time director Shawn Levy and Ryan Reynolds have joined forces, their first time being on the forgettable pop culture milking action comedy Free Guy, and the same energy has been placed into The Adam Project. The film’s plot when watching is intriguing at first, however even a week after I’ve watched the movie I’ve forgotten about the majority of the major plot points, which is the same statement that can be made for Free Guy.

Is Netflix’s The Adam Project a bad movie? Despite my comments on it’s mediocrity there are some good points to be made about the film, the aforementioned chemistry between Reynolds and Scobell, the action and choreography is great, the special effects are pretty good and whilst the plot can be hit or miss, the general premise of the movie is promising but safe.

The Adam Project, a pretty good movie that I’ll never think about again.