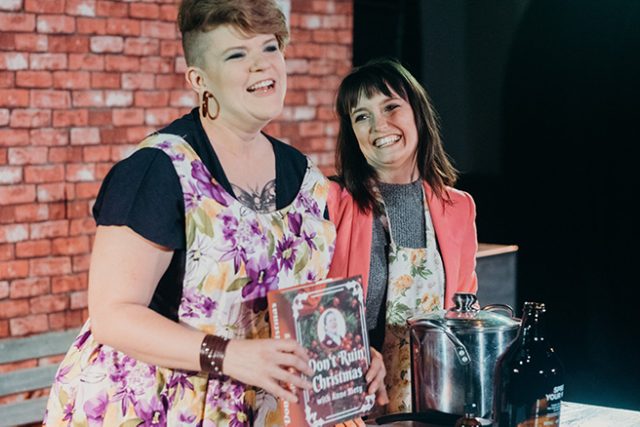 Within the setting of Panic, a neatly evoked railway station in the same suburban locality as the theatre in which a play with a long title is presented, a woman impatiently waits for a friend whilst treating her cigarettes one after another more as “gaspers” than symbols of coolness. She personifies anxiety; we are in Anxiety Land!

Panic is perhaps merely one station with similar evocative names along one of the railway lines emanating from our/your city centre. Fast-running footsteps and panting (gasping under another guise) presage the arrival of the friend, her bestie, who is pathologically unsure of what may or may not be in her bag, including the important tickets for the show at their intended city destination; she’s seemingly unsure where any thing may be – her running is perhaps a symbol of a modern Sisyphus trying to find a resting place atop her desired Hill of Certainty. She matches her friend in personifying anxiety.

She has to run – fast again – somewhere (car? home?) to look for the lost items. She returns in time for the increasingly distressed but determinedly optimistic couple to miss a train, or two, or three, as various pitfalls engulf them. The besties are in heavy flail mode, exhibiting traits of anxiety that we can all identify with. We return several times to their flailings played out at the station (spoiler alert: they never board a train – in effect, their anxieties have them rooted to the spot), interspersed with episodes in different settings with different characters exhibiting a possibly never-ending variety of anxieties. 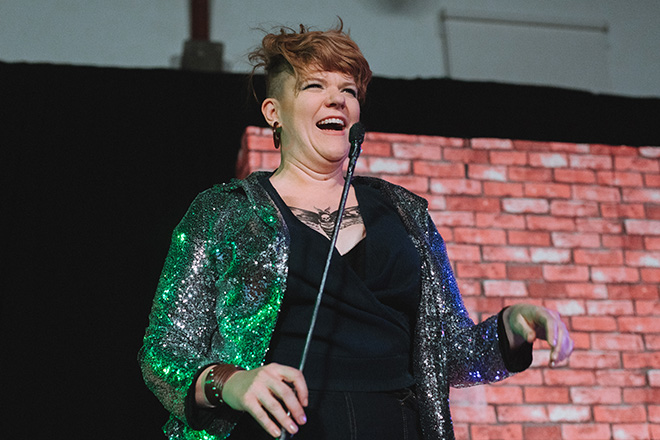 One episode features a hapless contestant, valiantly parrying a questioning ogre whilst trying to win a big prize by successfully answering four questions (which all ironically have the same answer); she’s on the verge of winning the loot but her anxiety causes her to muck up the final answer.

This skilfully presented show runs for an hour; a sufficient dose of anxiety for this watcher as the disaster continues. Compliments to the set and lighting designers, and also to the deft and economic costume changes.

It’s a pity that this group of theatre workers, Wit Incorporated, don’t attract larger audiences to their regular and varied shows; their cleanliness of presentation, plus their determination to present meaningful themes, deserves greater recognition and patronage from at least their local area. The acting throughout is typical of the group’s shows I’ve seen; well thought-out, socially accurate, and theatrically entertaining. That last is aptly shown not least in two excellently executed examples of physicality; one a thrilling rendition of a displaying bird of paradise, the other a somewhat unexpected display of pure explicit thuggery. (Both the beautiful and the ugly here are facets of Anxiety.) 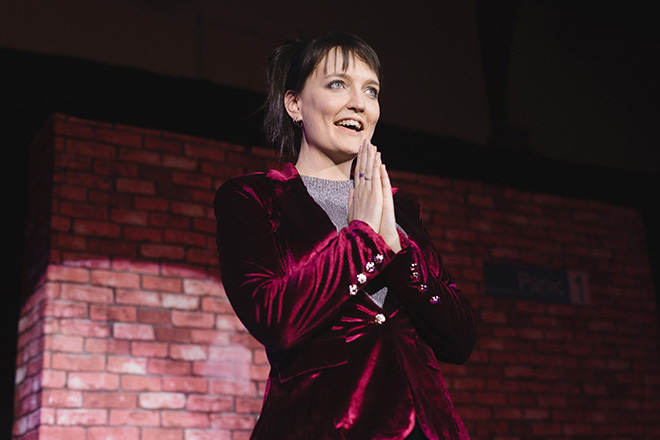 So, what’s the solution to dealing with this anxiety that we can all identify with, even though we, like the characters in the play, can – albeit flailingly – attempt to rationalise it away? None meaningful for the moment it seems; as the women leave their local station, now too late to see their ticketed show, too late even to “have drinks” in the city, they optimistically make a plan to return to the station tomorrow, to aim for the beach, maybe. If they do get to the beach (Willi-perhaps-by-another-name is but a few stations away) they may find a couple of well known tramps waiting for someone who never comes. Their destiny seemingly lies with others trapped in the Vestibule of Anxiety, which is surrounded by dimly lit corridors that lead to who-knows-where, until perhaps a saviour of some sort can find a solution.